So I think I will leave you on the topic of our trip to Vietnam and elsewhere with this little video of Hanoi traffic:


I actually took about 3 minutes of video (laughing at the absurdity of it the whole time) from the 3rd floor bar overlooking the 5 or 6 way intersection at the Northwest corner of Hoan Kiem Lake. I minute after this clip a full size tourbus appeared and made a U-turn in the middle of the intersection!

The original video looks much better, but Blogger modifies the image quality to reduce the file size.
Posted by Unknown at 7:42 pm 2 comments: 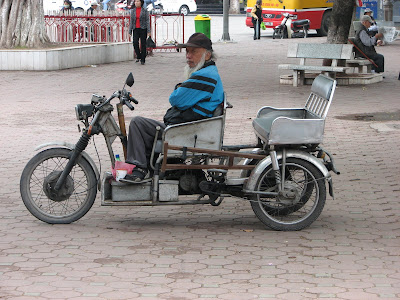 It has been over a week since we came back from Cambodia and we are slipping back into normal Vancouver winter mode. I don’t know about “normal winter” though, as they say it’s going to be a cold one and we have already had a good snowfall in town. It has gone back up to warm & wet though and as I write this about 7pm it is at least 10 degrees outside.

Arriving back here last Saturday was a bit of a shock, as my jacket and long sleeve shirts were buried deep in my pack and we ended up outside longer than expected as Linda’s car battery was dead and required a boost out at the airport before we could get home. No big deal though.

Our trip was really great despite the problems we had. Linda and I really do like to travel and do it well together, except when she tries to navigate. Since we have known each other we have been in various parts of Canada, the US, Europe, Australia, and a few times to Asia. Separately we have also traveled extensively and, until this trip, have never had any serious complications. This complication was obviously serious.

With respect to our stolen air tickets, we have been in communication with Vietnam Airlines with whom we had tickets from Siem Reap to Saigon and they have said that a refund is possible if after a year the tickets have not been used. Not the best result, but acceptable and much better than Hong Kong Airlines. This is officially a pan of Hong Kong Airlines in that they say there is nothing they can do for us to help us with the stolen tickets we had from Saigon to Hong Kong. In the case of both of these sets of tickets there was absolutely no way we could either use them or purchase replacements with the same airline (as HK Air wanted us to do), as we could neither leave Cambodia, nor enter Vietnam because of the lost Visa’s that were in the passports. Hong Kong Airlines will never get business from us, nor should it from you; thank you very much for your support, or lack of.

We have not calculated exactly what it has cost us to have pack stolen as it is quite involved, but it is in the thousands of dollars. Actual cash, Linda’s daypack and MP3 player, non-replaceable air tickets (more on that soon), fees for replacement documents, graft to the “police” in Cambodia, other miscellaneous expenses, plus costs for new documents for both of us here at home. Please add to that the stress involved, especially for Linda, which can not be quantified or as MasterCard might say, is “priceless”.

I also say for Linda deliberately. Yes it hurt me, but it was more visceral and real for her as she was the one holding the pack and the one almost assaulted in the ripping of the pack from her arms. As mentioned earlier she was nearly pulled onto the street when the bag was grabbed and could have been seriously hurt. She also felt much more violated than I did, and blamed herself somewhat for the loss. That was not something I can find fault with her over, nor should anyone else. As I have mentioned before, there was a series of circumstances that led us to have all this stuff stolen, some of which could have been prevented but on that particular day in that particular place, were not. Enough said…

I am getting back into wearing shoes again after probably the longest stretch of sandal wearing I have ever had, and I may still have some of the Chaco Tan (http://backcountryblog.blogspot.com/2007/10/chaco-summertime-z-photo-contest.html) left by next summer. Personally I think it is unfair that the contest at the above link ended on Oct 22nd as our trip began Oct 25th when my Chaco Tan began! 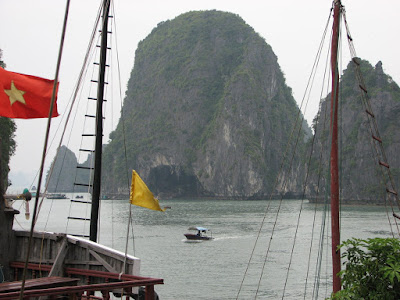 Some of the recap things from our trip that we will miss are the friendly people, the dramatic scenery from Halong Bay to the Mekong Delta and Angkor Wat, simple but incredibly good food, shopping and paying less than half the asking prices, opportunities to eat bugs, a new beer or snack food that goes with beer in every town, geckos, boat rides and on and on.

Things we won't miss so much are the constant horn-blowing and traffic snarls, persistent souvenir sellers, shower heads that can't aim above my chest, oily spring rolls, bureaucracy, butt-numbing bus rides, and of course thieves!

Weird & unusual tidbits from the tip:

-A marching band on the street outside our hotel in Saigon...at 4:30 in the morning!

-The 20 foot tall chicken sculpture in the village near Dalat

-5 cel phone stores in the block across from the hotel in Pingxhiang, with a dwarfish guy singing (pretty well actually) with a PA system on the street in front of one of them. 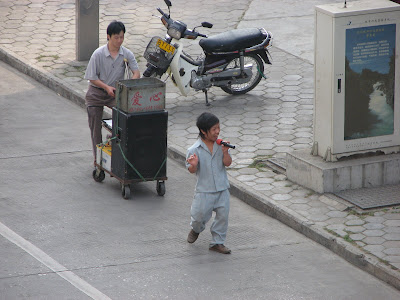 -The old guy on the outskirts of Pingxiang who insisted I was a "Rrrruskie!" 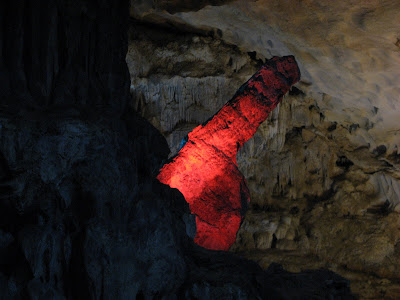 Of course there were lots of other things we will miss or not about the trip. We';; just have to go another trip soon to remind ourselves of what they are!
Posted by Unknown at 5:06 pm No comments: