Some of our bookings are in place

I have booked a few of our accommodations for the trip now. We don't want to prearrange the entire trip by any means, but sometimes you come across things that just sound a bit too enticing to pass up. Not that you always make the right choice, but that's part of the Joy Of Travelling 101, First Lesson: Be Flexible And Take It As It Comes.

We also like to make sure that at certain times you just don't have to worry, for example when first arriving in a new country. With that in mind we have looked at Casablanca but not arranged anything yet. We sent out a couple of Couchsurfing feelers but so far not had any luck in either Casa (first night) or Amstersdam (last 2 or 3).

Not a big deal as we still have lots of time. We did however decide to bite the Euro Bullet and book a place in Amsterdam here for our last few nights at the end of June. That city is not cheap with even quite expensive hostels and we wanted to be able to relax and enjoy the city and not the bedbugs. At $95 Euro a night it better not have any.

In Morocco we have been trying to make sure we spend time in at least one Riad. A Riad is a traditional house design similar to a Roman or Spanish Villa, with little in the way of design feature or even windows facing the outside, but the aspect of the rooms mostly facing inward to a central courtyard or garden. It makes for a calming, cooling atmosphere but can often be quite palatial as well.

The original Riads in Morocco were inspired by the ancient Roman city of Volubulis, long in ruins, and just walking distance (3km) from the first such home we will stay at in one of the holiest towns in all of Morocco, Moulay Idriss. In fact Moulay Idriss could kind of be described as the "poor Moroccans Mecca" as it does serve that role for Muslim devotees who would find it hard to travel all the way to Mecca itself.

Our first stop after Casa will be a room here at Dar Zerhoune, which looks absolutely stunning. We came across this through a very interesting site which promotes preservation and restoration of the Riads and the Medinas (the walled and maze-like inner districts of older Arabic cities & towns). We also booked through this site our rooms in Pension Sakaya for our next stop in Fes. Looks pretty good for 300 Moroccan Dirham a night, about $35 Canadian.

In this blog, I don't want to borrow pictures from other sites, but would rather just use my own, buut what the heck...here is one from Pension Sakaya. I'll add my own when I have them!

Posted by Unknown at 9:17 pm No comments:

We've started to settle in a bit more for itinerary. Now we have bought our air tickets and have revised the plan and route somewhat. Alaska Air to Seattle, KLM to Amsterdam, Royal Air Maroc to Casablanca. With several hours in Amsterdam we might take a quick jaunt into the city, but will eventually get to Casa about 4pm.

From there we have reversed the original direction so will head to Meknes and Fes spending about 5-6 days in that area. A side trip to an ancient Roman city called Volubulis will be likely, just to say we checked out the ancient Romans.

With our rental car from Fes we will take 2 days to get to the KhamliaHouse near the Algerian border just south of Merzouga where we expect to spend 3 nights, at least one after camelling into the desert.

After that it will be on to Ouarzazate, about one day's drive and then to Marrakesh.

Average temperature data for this area for the time we will be there, by the way is about 98 degrees F, 36.7 C...but at least it's not July!

Ouarzazate is kind of the Lone Pine of Morocco. Lone Pone California is a place I have also been through, though long after its heyday of being the site of many, many Hollywood Westerns and other movies. Ouarzazate may be a relative newcomer, but it's hard to argue with an impressive resume of films such as Lawrence of Arabia (1962), Star Wars (1977), The Living Daylights (1987), The Last Temptation of Christ (1988), The Mummy (1999), Gladiator (2000) and Martin Scorsese's Kundun (1997) all shot in the Ouarzazate area.

The rental car will get abandoned in Marrakesh, and we will spend several days in the area and day trip at least but more likely overnight out to Esarouira on the coast.

The Morocco side of things will wrap up with an EasyJet flight from what might be one of our least liked towns, Agadir, to Paris. Unfair, when we have not been there yet? Maybe, but Agadir sounds a bit like a package tour hellhole. It was destroyed by an earthquake in 1960, so the city was rebuilt in a modern grid style and is a great pace for beaches and surfing (read bums, both well-off and ...well, bums!), neither of which really intrigue us. From what we know so far it sounds a bit like Waikiki or Cancun. Harsh maybe, but for us it might just be a place to get out of.

Of course that makes me sound a bit cranky and might be perceived as some one who just thinks that we should expect to find the Arabian Nights or some mystical, mythical, noble, nomadic culture. Yeah, so...that would be great...as long as we can still access the Internet, preferably with free Wifi.

So my preconceptions of Morocco are probably way off, but I can still dream a bit can't I?

Anyway we decided to nix the boat and train to Paris and fly partly due to price but also time. EasyJet to Paris takes about 3 hours or so, and cost us about $60 each. The ferry would have been closer to $200 each and added a day for the boat alone, to the south of France, then another day or more to Paris. This way we get to spend more time at the (already paid for anyway) apartment we have waiting for us and will spend more time exploring locally and relaxing and much less time from point to point.
Posted by Unknown at 11:22 pm No comments:

The trip is starting to shape up...Volcano permitting

We have booked the main tickets now, so I'll be a bit more specific than flags and foreign language phrases.

We are heading to Morocco through Amsterdam, then back to Paris, then home from Amsterdam. Travel dates are from May 25 to June 27th.

The only really certain things yet are the air travel and the fact that we know where we will stay in Paris. That last part was actually the only thing certain about 8 or 9 months ago as Linda arranged an apartment in Paris for 10 days from June 15-25. We will stay there less than the entire 10 days but more on that later.

On the way there we will touch down in Amsterdam for a few hours and then travel Royal Air Maroc to Casablanca. We'd probably not go to Casablanca, the most modern and cosmopolitan (read expensive) of Moroccan cities, if there were easy connections to other cities. Most flights go through there anyway so...

One or 2 nights there we will also book from here, but most other things we will find or arrange as we go. When touching down tired and jet lagged in a new country it's always better to know where you are going to sleep for at least one night!

From Casa we probably will head south to Marrakesh and spend a few days there, with a trip out to Essaouira on the coast, before heading inland in (maybe) a rented car. The plan is probably going to include travel through Ouarzazate, and then on to Merzouga and south to a region in Erg Chebbi where we wil hopefully spend a night in the Sahara Desert after getting there by camel.

That is another part we will try to book ahead as camels don't like drop in visitors.

After that, up to Fes and area for a few days, dropping off the rental. Then to Tangiers and possibly a ferry ride to the south of France, arriving in Sète after 36 hours crossing the Mediterranean.
Posted by Unknown at 9:30 pm No comments:

Yes the time will soon be upon us to smash the pig!

Some of you may know that I do feed a piggy bank. Now this ain't no kid's collection of pennies and nickels, saving up for a slurpie or a slushie, whatever those are. Nope these are big suckers... and the only coins that go in them are loonies and toonies. That's Canadian one and two dollar coins, if you don't know already.


And the banks I get are as large as I can find. The first one was from a funky tourist trap in Coombs BC and was a cute little sucker. He still sits in the back yard with a big gaping hole in his porky little butt, as I didn't have the heart to smash him to smithereens. 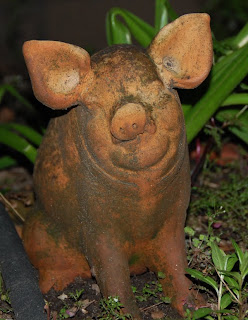 It might be a terrible investment strategy with no interest, but it is painless. Every 1 or 2 I find in my pocket goes in the bank. Purpose? Vacation money!

The first pig met his demise about 10, maybe 12 years ago, and as the $2 coin was not long in circulation at that time, and the pig being the smallest of the ones I've had, I only collected somewhere around (if I remember correctly) about $1100.

Yep. $1100! That went a long way for pocket money on our first trip to China.

Next time the pig was the same design, but bigger. The take was around $1700 I think. That helped on our second China trip and Australia too. His cracked form also decorates the patio.

Porky 3 was not a pig at all, as they are not that easy to find, or at least big ones are scarce. Linda's mom found a big beehive shaped thing in Chinatown. The yield this time was just over $2000. Much of our South East Asia trip was funded with that one. No cute factor on that bank though so the shards are long gone.

The 2010 edition is the ugliest one yet. Made by a potter on drugs, inspired by Salvadore Dali, his face is going in a few directions at the same time. This one came from a friend who knew of my pig stash past. It will be the hardest to break both because it's pretty thick but also because of the incredibly ugly cuteness of it!

However it's soon going to lights out for the porker. Yes, he is full. Maybe he will take another $10 or so, but not much more. And the timing is just about right...with the next big trip around the corner. 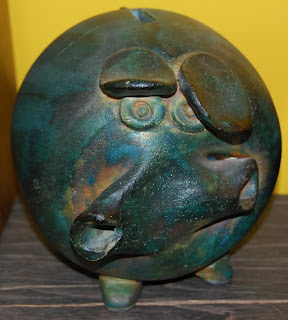 I expect around $2000 from the petit cochon this time. I think I might just capture his death on video too! Oh yeah, I'm not telling you where I live in case you had designs on my bacon collection.
Posted by Unknown at 7:44 pm 1 comment:

Yes trip time is coming soon upon us and we have a couple of things/places on the agenda.

Posted via web from afishneedsablog's posterous

Yes trip time is coming soon upon us and we have a couple of things/places on the agenda.

Posted via web from afishneedsablog's posterous

Posted by Unknown at 5:09 pm No comments: