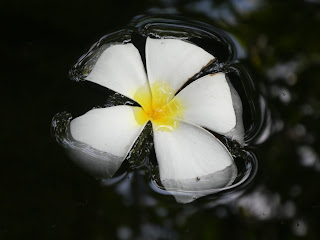 Yesterday in Bangkok we went to the massive Chucatuchak market early in the morning. Taking a taxi was a bit pricey compared to trains or buses but got us there fast.

Early meant avoiding the later crowds which were really buiding by the time we left, but some vendors were not even open. But with 8000 stalls to choose from we could miss a few. We also never found the grilled platybus food stall again when we decided it was time to eat. Maybe it was just as well. We did find some great squid though and other snacks like coconut juice from the shell. 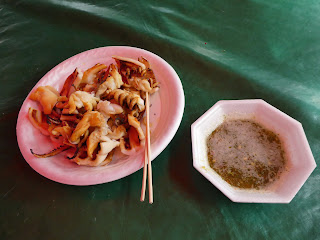 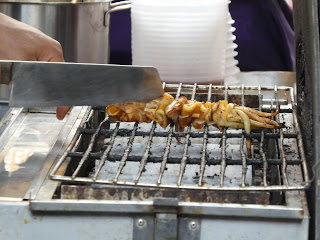 From the market we took the skytrain to the Jim Thompson House. Thompson was an entrepreneur who did more to advance the Thai silk trade than anyone else. I'll edit in a bit more about him later.

His home was a rambling array of teak houses he had moved to their current location in central Bangkok and amalgamated into an estate for himself, modernizing a bit as he went. It was a refreshing change from the bustle outside and our only real "museumy" thing we did in the 3 days in Bangkok. It was well worth it. 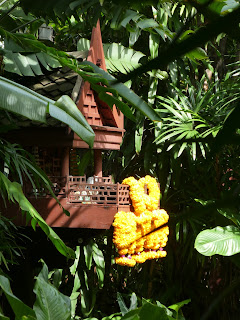 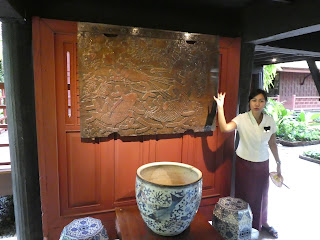 We tuk-tuked home, showered for the 5th or 6th time in a couple of days, drank beer while it dumped with rain again and went back to the street for food later.

We had made an arrangement for a taxi to take us to the airport early but he cancelled on us. He had the courtesy to call the desk at least so we knew and soon we had another around 7:30am.

Getting to Yangon was not that difficult. We had all the right paperwork, the flight was short and more or less on time, and in the arrival airport we very soon had a SIM card and 300,000 in kyat (the local currency, about 900 to $1 CAD). We overpaid slightly for a taxi to the MGM hotel (paid 10000 when 5-6000 should have been the rate), but I don't sweat that stuff much. I sweat enough from the heat. 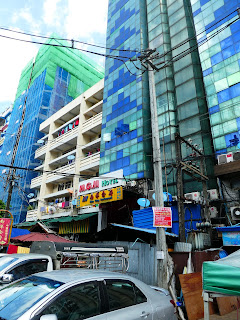 Different here than Bangkok, that's for sure. Traffic is louder and pushier (hardly a horn was used in BKK, not the case here), the streets are a lot dirtier and stinkier, the infrastructure more rundown. It feels more like some of the parts of Cambodia and China we've been too.

However, it's not like we expected luxury. People are friendly and helpful, things seem to mostly work, the hotel staff jump to open doors and carry bags. I ask before I take many of my pictures and nobody minds. The big nose gets stared at of course but I'm used to that. I'm not quite sure the guy waving his ass and other bits at us was being friendly though.

A lot of walking took us though parts of Chinatown, a rather dingy waterfront area, past a classic English style hospital building, into an air conditioned mall to cool down, through crowded market streets and then a visit to the Sule stupa right in the heart of downtown. We plan to visit it's much bigger brother tomorrow. 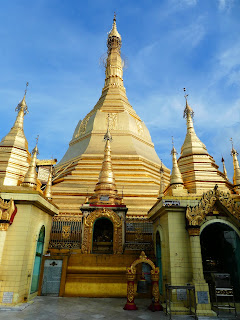 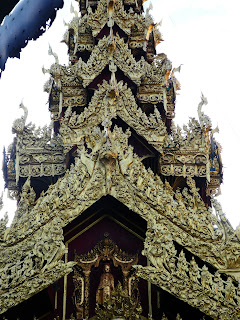