Day 1 in Transit, Day 2 in Bangkok 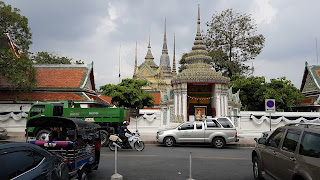 The view from the front steps of our $30 per night Hostel kind of sucks doesn't it?

That's just the first picture; the others are some sort of free taxi service and silk "fashion" in a shopping center. Wih this blogging app I'm not sure how to insert pictures anywhere but the top. 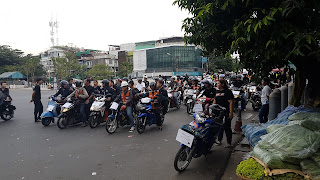 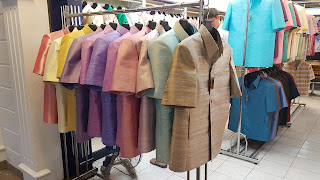 That's Wat Pho just across the road from Arom D. We got in very late last night, after a 12 hour flight to Shanghai, and 4 plus hours to Bangkok. The first flight was spot on time but the second had a delay with little explanation and when we finally did get on the bus to take a mile long route on the tarmac at Pudong, it was not because anyone did announce it. We saw a bus with open doors at our gate and jumped on.

Tight spacing on the seats (and way too much money to upgrade - 1000RMB for an exit row seat!) so I ended up with cramped legs and bruised knees. My sneaky little bag  of 2 oz liquor bottles wasn't allowed by China security guys at Shanghai though I did consume 2 at least on the Vancouver leg.

We didn't arrive in Thailand until at least 11pm local time and with getting through customs, baggage and exchanging some USD for baht the outside we only reached by nearly midnight. At this point we had no energy to take buses or trains so got a taxi. It's an hour easily into the city and we probably got taken somewhat on the fare but the guy also had to pay 2 tolls plus airport fee and he got us to the door with no wrong turns. The staff person had to get out of bed to check us in around 1am.

Sleep? What's that? Neither of us got much on the flights and only 2 or 3 hours in the beds at Arom D and were up by about 7am.

Wandering the streets by 8, noodles in a local market, walking some more. We found a bank machine that would give us cash but had no luck with finding a SIM card that worked in my phone until much later.

This being a Saturday there seemed to be many events bringing Thai people from all over to visit the Royal Palace. The king of course recently died and the entire country is in mourning. Black is almost the universal clothing right now. Ours isn't quite all black but we are not wearing anything bright while here, plus picked up some black ribbons to pin to our shirts.

All around the palace, which we couldn't go in as we are not Thai, it was almost a carnival atmosphere. Free water and food was everywhere, ice cream, cold juices, cookies. Later on we got free gyoza, curries with rice, chicken wings. We resisted lots of it too but it easily was lunch. We didn't get to buy any critters on a stick.

Our splurge so far was on a private boat tour of the river and a floating market. Expensive, but we did get it for just over half the original price quoted. I'll post a few pics from that and the rest of the day later.


Edit: It's 5:45 am local time and I've been awake for quite a while. It's mid afternoon in Vancouver and my body knows this.

Monsoon quality rain struck last night just after we got back to our room, so it was just as well we didn't stay out.

Today's trip to the big Chucatuchak market might end up dampened.

Later yesterday it was street food including our first spicey Papaya salad. It was just great and so was our host.

Note that I'm trying to do this blogging stuff from a phone. Addings pics can be awkward when most are on the camera. Also the Blogger app on the phone is inconsistent at connecting. I might end up with odd double post because right now I'm not using the app. 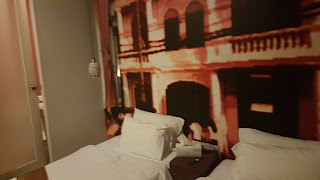