watch for edits to this and some other earlier posts in a few days. I'll be adding more pictures and getting up to date soon when I get more consistent internet connections...and now back to our regularly scheduled program... 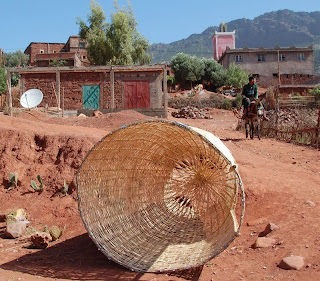 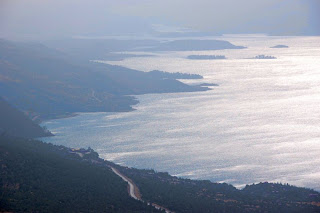 Leaving Azilal we headed east and north for a bit climbing somewhat eerily into the clouds before descending toward a lake in the Western High Atlas region. We soon crossed a dam (the lake behind it) and followed the comparatively lush river valley down until we eventually reached an expansive level plain covered in crops. We soon were on the N8 highway and turned to the west and Marrakesh. 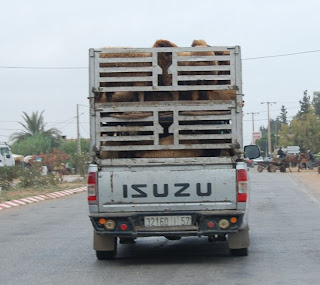 Once on the Marrakesh Expressway (can't resist calling it that), we made pretty good time into the city closely following a double decker sheep truck much of the way and after some minor misdirection headed for the airport to return our rental car one day early. We did not get any rebate on the price, but after entering Marrakesh I was convinced that I did not want to drive there any more than necessary. It was not out of control but I did not need the extra agro of figuring out a big busy city. We had to fight a bit on the price for the taxi back to the medina where we were staying, “but there's a system” protested the guy at the stand when we refused to pay the set fair, so we said “but there's a bus”, and it was pulling in, so we got close to our price which was half the rate they asked for. Once again meters are non functional near airports.
The hotel we took this time was also called Gallia like the one in Casa, and had been suggested by some Americans we met in Dumnut. It was quite nice and again Riad style with reasonably well functioning air conditioning, both natural and of the electric kind. It was also very conveniently located at the edge of the medina and just 5 minutes walk from the huge square Djemaa el Fna which forms the vibrant cultural heart of Marrakesh. And what a heart it is... 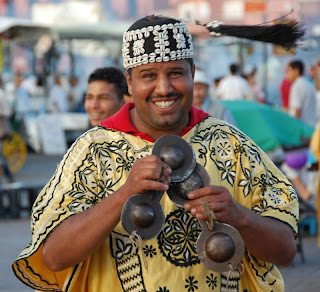 A lot has been written of this square, by better writers than me, and I really can't describe it adequately. Imagine a carnival, a music fair a la Woodstock (but smaller), and a cooking showdown, then throw in some magic potions, and a bit of time machine, stir well, pump up the volume...and you come close. 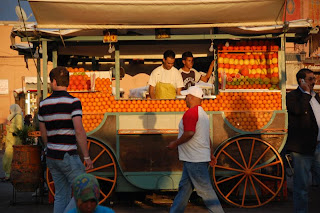 If you wish to have your fortune read, or have your hand henna'd, get your picture taken with a cobra, or with a Barbary ape on your shoulders, buy water from someone with a funny hat and brass things hanging all over him, or the best fresh squeezed orange juice you have ever had for only 40 cents, get yourself smoked while eating some of the best grilled meat ever, or even get something to smoke of your own, have yourself cured by something distilled from ostrich leg, or eat goat's head soup...all of it to the tune of numerous Gnaoua drummers and cymbals and enticements to buy this and eat that... you come here. 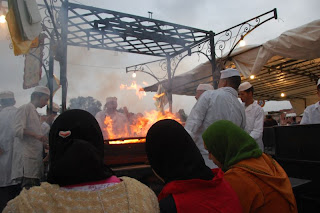 The square is alive almost 24 hours a day. The 60 temporary food stalls set up every evening at 6 pm and go until 1 am, but from then until sun up is the only quiet time. The multi acre square is also surrounded by restaurants and hotels and market stalls, and everyone vies for your business, and sometimes quite aggressively. You had also better not be seen taking a photo of anyone trying to sell or perform here, without being prepared to have some baksheesh change hands. 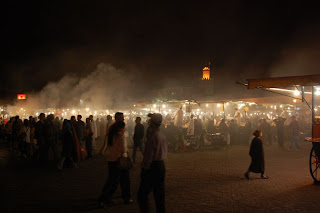 Fortunately we were far enough away and facing a quiet courtyard that it was very quiet at our room. I don't think we could even hear the muezzin call the faithful to prayer which was almost everywhere else we have been. Maybe there were fewer practicing Muslims in Marrakesh, or less frequent mosques, but we still did see overflowing crowds at the mosques. 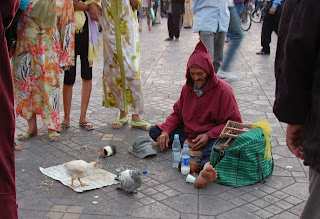 Anyway people practice everything here, and sell everything else. The selling was the pushiest we have seen, including literally being pushed by a guy in the market trying to get me to eat at his stall. When there are a hundred other places to get the same stuff within a few minutes walk, that ain't the way to get my business bro, and I told him so. These guys got our money instead: 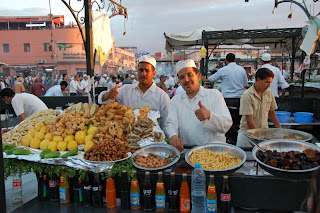 Marrakesh has a larger market than that of Fes, and with wider streets. I hesitated to call them streets in Fes as they were so narrow, but in Marrakesh there are scooters and 2 wheeled trucks and the odd car even going through a lot of them, in addition to the hand carts and, donkeys and occasional horse drawn wagon, so you have to watch your back. As far as watching your back in other ways, it was probably possible to get mugged here, or have your pocket picked but I don't think likely. 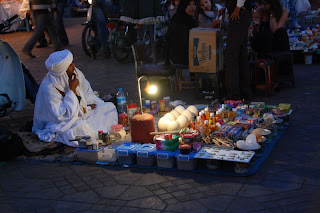 Amid the runaway capitalism, or it it just scraping to get by, there are also beggars galore. We have handed change to quite a few, usually the less pushy ones like a blind old man in an alley, and gave left over food to some others, and bought soup for one fellow hanging around outside a stall where we had just had a meal. Gratitude we got in return, but with our own relative wealth it was still really doing almost nothing. Just getting here cost more than most of this people could ever imagine spending, and for a vacation...what's one of those? 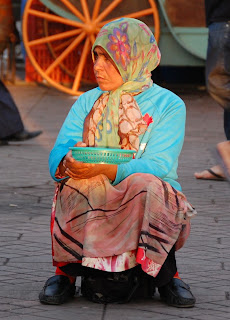 more on Marrakesh soon, markets and museums.
Posted by Unknown at 3:25 pm