The View From Fes and Camel On A Bun

Once again, sharing a Grand (ol’) Taxi was convenient and cheap as Aussies Colin and Belinda were ready to go back to Meknes at the same time as us. From there we walked to the nearer of the two train stations, the one we had slept near the other night. Train fare to Fes was 20 dirham each, for the hour long journey. Train travel here is really a bargain, and is electric powered with fairly modern cars and stations, but unfortunately the system does not go everywhere.
The Fes station in particular is very modern and immaculately clean. But once outside don’t take a taxi from there, as there appears to be some sort of EMP or Black Hole affecting the taxi meters. None of them work, so the fare to the entrance at Ain Azleten in the medina is quoted as 40 dirham for each of us, so 80 total. However if you walk a block or so and grab a cab there, outside the Event Horizon, the meters miraculously are fully functional so the drive only cost 12 dirham. 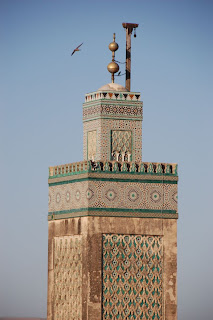 Our stay in Fes might be just a bit too long at 4 days as have seen and done most things we would like to already after a day and a half. In fact I might just check with our car rental company tomorrow to see if we can perhaps get our car a day early so leave here Wednesday not Thursday. It's not like Fes is boring, but the pushy sales pitches are a bit tiring. I almost bought an Avril Lavigne poster yesterday. 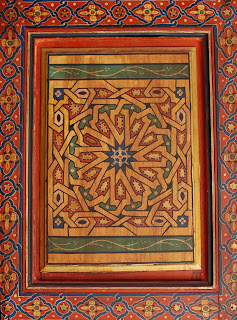 We are also not feeling the need to visit museums when or if we find them. The whole place is a living museum. 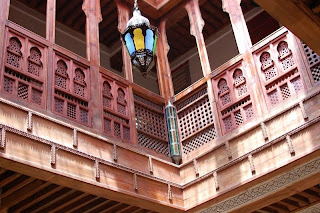 Everything is for sale here, and all of it at “best price” by “my brother”. The guides will take you anywhere…anywhere they get a commission that is. And the medina is so vast and convoluted that one is often tempted to go along with the guide, as you don't think you will find the stuff you want, whatever that is, or find your way home. The narrow streets are laid out like a maze, as little as maybe a meter wide, and are often dark and winding plus all of them look like a street you have seen elsewhere, but where? 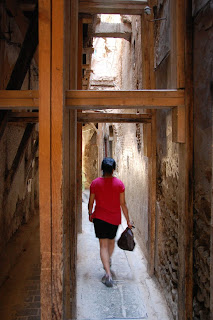 One of the greatest things about the medina though is that the stone and the street narrowness and the fact that some sections are at least partially covered and shaded combine to produce a cooling effect. You often feel refreshing breezes that one would not think possible from the temperature in the open sun. We have ventured out of the medina, and usually scurried back in or at least got out of the sun as soon as possible when we did. 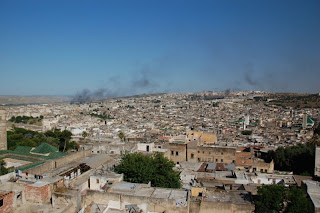 Late this afternoon, thinking (foolishly) that it must have cooled down a bit we took the exit closest to Pension Sekaya where we are staying and walked up the road to a vantage point point near the Meriendes tombs so we could look out over the city. The temperature on my Suunto watch registered 39 when I looked as we were coming back down the hill, at about 6pm.
Day 3 in Fes-----------------
Shopping all done, car rental and departure updated to tomorrow but where to tomorrow we don't quite know yet. Perhaps South to the Middle Atlas and Azrou plus the lake region around Irfane (sounds cooler), or maybe to Taza and the caves near there (sounds cool too!). Taza looks like an out and back route, so not so enticing, but whatever it won't be high mileage. 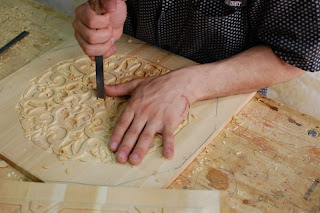 We don't plan to buy too much if we can help it, but it's hard to help it here in Fes, and we certainly won't find a better range of souvenir goods at competitive prices, or we hope not. No T-shirts, but we have some textiles we purchased from the weavers themselves and a few leather articles. The highlight so far is a wooden carving bought around the corner from where we sit and directly from the carver and his apprentices. They finished carving it after we closed the deal, but it had three days of work in it in all. Actually in a sense they did not finish it, as it was destined to be a panel in a door, but we asked them to sell us one as-is and without even oiling it or applying a varnish. We plan to pack it and send it home where I can oil it myself, and do not want it to be still wet when packed as we plan to send a box soon. 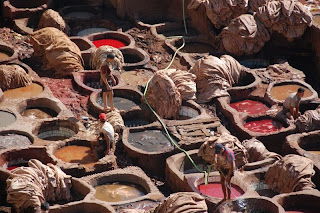 Earlier yesterday we took a look around the largest and most famous leather tannery. Reportedly the best time is in the morning before the place gets too rank. One of the processes used to cure the leather is by soaking it in guano, so you might agree that it could be a bit odoriferous. The men working here apparently get well paid, and good for them. I wouldn't do it; it looks like nasty work.
The best way to see the tannery or at least the big one we saw is from the shops that overlook it. The touts will take you there whether you want it or not, and the shopkeeper will sell to you whether you want to buy or not, but while there they will explain some of the processes so if you can resist buying or at least shop wisely it is not bad. It's laid out like Ikea though, deliberately designed to take you through all the sections you don't really need stuff from, to help tempt you to buy. 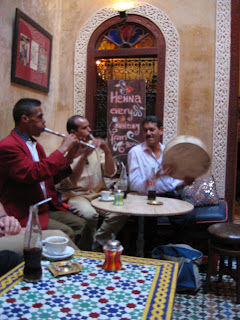 Our first day we visited Café Clock, a very cool converted townhouse that has simple dishes, some a bit westernized or at least modernized, but also promotes local culture and customs in a youthful manner that appeals to the hip Fassis (people from Fes) and ex-pats as well. We enjoyed a concert of Jilala traditional music with flute & drums (a band called Issawa). I wish I had thought to pull out my phone and try to record it, and maybe the girl who spontaneously started singing between the band’s songs. The place did get rocking with every employee getting into dancing and clapping too.
Tonight we plan to head back to Café Clock for a camel burger. Yummy!
As for other food, we are trying not to order too much every meal, for one it is too hot much of the time to eat a lot and for another they always bring olives, bread, and or beans as appetizers. Tajine we will have lots more of, so we try not to order it all the time too. The fish here has been great, and I had my first cous cous just yesterday. We think that discretion is the better part of gastronomy when it comes to fresh fruits, as evidenced by the proximity of this roosters posterior to the fresh apricots. 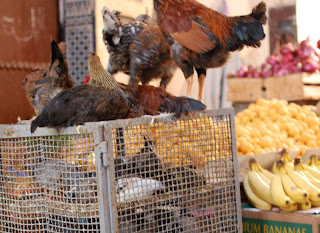