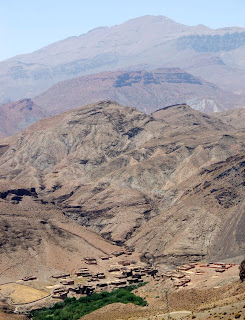 After Todra we could also have visited the Dades Gorge and if I did this again, or could rewind this trip, I probably would. No tears over not seeing it though or the Ksar at Ait Ben Haddou past Ouarzazate (“wherewaszat”...ok, not really..more like “wherezazat” ). The pass through the High Atlas to Marrakesh would also have been nice to see, but we did not want for scenery.
In our quest for cooler climes and not wanting to do the exact standard tourist circuit I had researched a route through the High Atlas to Demnate that was a road less travelled. In fact it was not well known and some people later did not believe we had done it in our basic rental car. There is a well known route from Skoura to Demnate but our route was only a few km, maybe 10-12, outside Whowaszat, about 50 or more km to the west.

When we turned off the signpost said 137km to Demnate, which on the roads we had been traveling on would have taken about 2 hours maybe 3 at most. The highways here have speed limits up to 100, but are often 80 km and often slow down to 60 and even 40 in towns, and that does not account for the carts and other slow vehicles. Drivers for the most part keep to the speed limit or very close, and we saw lots of radar traps set to help enforce that. Not wanting to pay an expensive fine on the spot we did the right thing too. 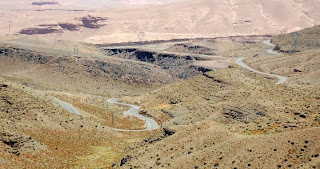 So what happened to those 2 hours? After the first 20 km I thought this would be a breeze, doing 80 or more. And then we started to climb. And we climbed...and climbed...and twisted...and turned...and more of the same, for about 5 hours. I dubbed it The Road of 10,000 Switchbacks. I know that's an exaggeration but it gives you an idea of what it felt like.
These were not guard-railed and nicely smooth curves either. It made the driving not quite a white knuckle experience but it came close. The road was quite good at first too but as we ascended it got narrower and worse until for much of the time we had barely a lane wide and often that was broken and eroded pavement and later we had quite a few sections of dirt, some of them quite long and/or rough. I spent most of the time in second gear, both up and down hill to save the brakes. Sometimes first gear and only once in a while I made it to third. 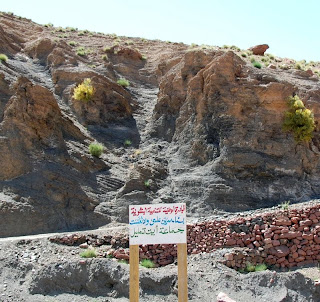 Without any signs for 100 km until the one above, which was not much help, we could only hope we had not made a wrong turn, but regardless the views were incredible with high mountains around us some with snow still. The peaks in this area are up to 3,000 or perhaps 4,000 meters and we reached heights of about 2300. Often we had long cliffs below us and could see the serpentine route below. Unfortunately the narrowness of the road allowed little safe opportunity to stop to take pictures, fearing some vehicle coming around a corner and taking us out. You have heard of those Peruvian bus disasters where 40 people tumble down a mountain side? This may not have quite that risky but at times it felt like it. The good thing was we only saw a few vehicles on this road and for the middle couple of hours not one. One van/bus almost did do a 500 meter dive when it came around a corner straight for us late on this route as they were probably expecting to see nobody else. 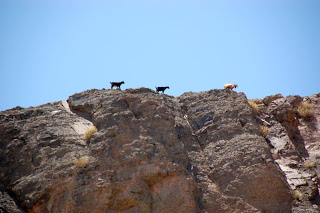 The town was underwhelming, similar to many others we had passed through and as it turned out we had to go back up out to Imi'n'Ifri, about 8 km away, guided there by a taxi driver who jumped into our car and asked for nothing in return. That seemed a bit odd, and was out of character with the typical guide experience we had been having, but we think he had friends next door.

Our place was great, but not what Lonely Planet had described. This was the first time we found them quite far off the mark as they said it was about half the price we ended up paying and that it was half board (2 meals included) for the price which it was not as food was extra, but as we were out in the middle of nowhere now and were tired and sweaty we did not argue or go elsewhere. 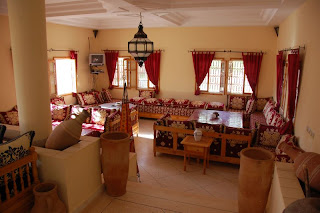 It was a practically new and beautiful quiet place, nicely decorated and and well constructed. We could have moved our bed into the bathroom it was so large, and we even had a swimming pool! Our food was fine too. I do think the place was our most expensive so far, and may have been worth it based on western standards but was more than we had been used to.

The area around Demnate and the next town Azilal in particular is considered the gateway to a region off the beaten track unless you like doing your trekking by 4x4 or on foot with guide and maybe a mule, known as the Ait Bougemez Valley. Our agenda did not allow for that kind of travel so we had to make do with just skirting this less developed fairly lush area, unfortunately. 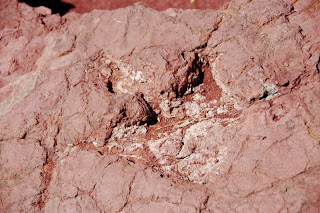 Azilal was our stop the next day but before going there we did go looking for dinosaurs, or their footprints at least. A few km after Imi'n'Ifri we found the spot after missing it on the first pass. There were kids willing to show it to me for a few dirham, and after wandering the hard red clay for a while without finding T.Rex I let a kid show me the indentations in the dry baked surface. There were several similar to the one above, 3 toed impressions about 6 or 8 inches long. If it was T.Rex, it was Baby T. Even with my recently acquired skills from watching Mantracker I might have looked all day for the tracks, but once you found one you could see others close by. I think someone added a bit of white paint to this one. 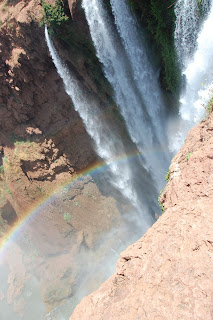 On the way to Azilal we also found another way to cool off, with a stop at the highest waterfall in Morocco and in fact the second highest in Africa after Victoria Falls, the Cascades D'Ouzoud. It was well worth the detour and was a great place to stop for lunch, despite the gauntlet of tourist trap souvenir, craft, and lunch vendors we had to run. We also had to put up with some monkey, or rather Barbary Ape, business on the way down, but the cooling mist was great. 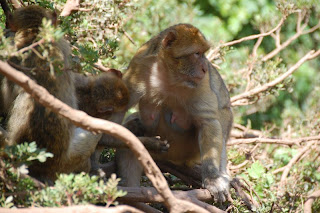 And we had to take or have taken the obligatory "couple in front of waterfalls" shot, thanks to a Spanish tourist. 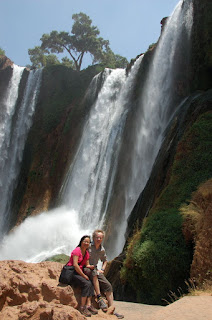 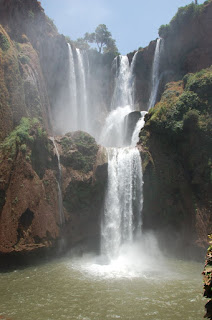 And just one more shot from our hotel room window in Azilal of these 3 women all wearing the traditional hijab head scarf, and splitting a gut over something they are reading or watching on a cel phone. The times they are a'changin'. 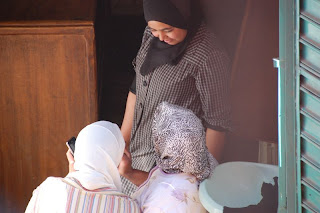