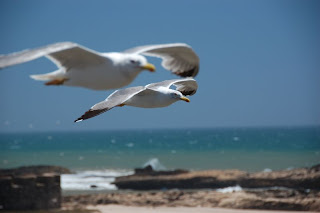 First time writing on a bus, but obviously wireless networks are fleeting at best, so this gets uploaded later. At least the bus is comfortable and we have the deluxe seats, first row by the door. The seats on the interurban buses, or at least the Supratour buses operated by the ONCF (the rail network) on this route are assigned seating and since we bought our tickets 3 days ago, we were given seats 3 & 4. There are 2 Nederlanders in 1 & 2 with whom we occasionally chat along the way, mostly regarding the quirks of traveling here. 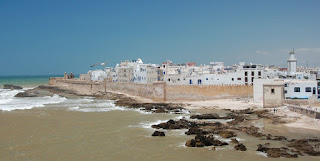 Leaving Marrakesh for Essaouira right now, a 3.5 hour ride, probably with no camel roadblocks but maybe some donkeys and certainly lots of mopeds. Marrakesh has been delightfully refreshing weather wise and unseasonably so. Last week the temperature was in the 40's but this week it has been in the 20's and the teens at night. In fact it even rained on us a bit sometimes which did not bother us one bit. Essouira might be even nicer due to the coastal location. 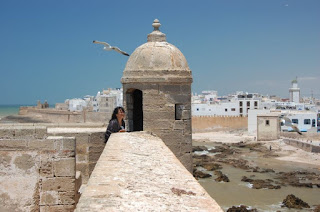 The buses are also pretty organized and this bus at least modern and air conditioned. As is common we have to listen to local music which is a little too loud but we have had a lot worse in Asia. It would be nice if they told you that you have to buy luggage tickets when you buy the bus ticket, but at least they do tag the bags under the bus.  We will be spending 3 days in Essouira and then one night in Agadir before flying to Paris. Essouira has a climate approaching that of California, but probably closer to that San Francisco to Los Angeles and maybe a bit warmer. As far as cities go there are probably other parallels in that Essouira is more laid back and an older city. Agadir was destroyed by an earthquake in the 1960’ s and was reconstructed in a modern grid pattern and made into a modern touristy town catering to package tours. We will see soon in any case. 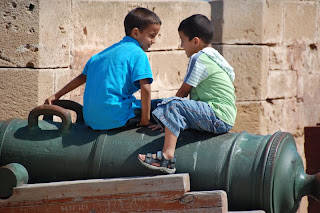 Arriving in Essouira and finding our hotel, Riad Nakhla, was pretty easy. The town is not that big and the bus stopped about 100 meters from the place, as the seagull flies, though we had to walk quite a bit further to find a gate through the ancient fortifications and puzzle out the usual maze of narrow and not well marked streets of the medina.  As usual there were lots of touts trying the sell their hotel and guys with carts to carry bags, but we got clear of them soon. 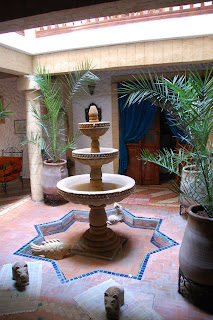 Once again it is a very pretty place though you would never know it from outside. Lonely Planet again pointed us to the one and got it right this time. If we were one floor higher we would probably have a tiny bit of view of the ocean, which we do get from the roof top terrace.

I could not see them when I took the picture below, but when I zoomed in later I could see a vast array of wind turbines in the hazy background. If the wind we experienced is any indication of how much or how often it blows here, I can't think of a better place for wind power generation. (this is a good opportunity to remind you that you can click on any image to see it larger, though all images have been resized to be smaller than original) 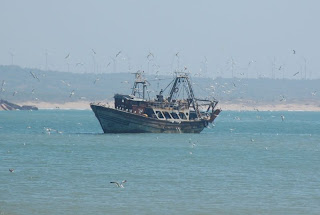 Our first sight of the ocean was from a bluff overlooking the town when the bus driver obligingly slowed down to allow some gawking though did not stop for photos before we descended. One side of town seems to be all new hotels and maybe apartments close to a sandy beach. The old town is largely surrounded by a wall and towers near a rockier shore and even has cannons in place along parts of the fortifications. There is a smaller fort on a tiny island in the harbour and between it and the old town the fishing boats dock at a protected pier.


Essouira changed hands and names number of times between Sultans, Portugal and France before becoming Moroccan in 1956 when the country became independent from France. Now it is somewhat touristy, but in a laid back way and with its wind and waves is quite a surfing hangout. We can see lots of kite surfing going on though, other than a board deserted on the beach, no board surfing so far. The waves are not that high right now but I am sure they get that that way. 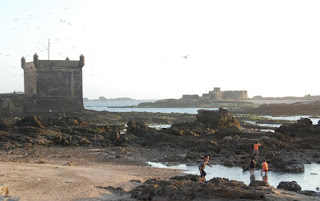 2 days later...
We have walked every street of this town's medina by now, many of them a number of times. I think we are shopped out now, but have made some friends of a carpet salesman, Ahmed, and a local artist Tibari. We bought work from both of them because we liked them, as well as the stuff they had for sale. The young painter spends his mornings on the beach and loves to surf, and even he said today is windy. The season is getting going he thought. Windy it sure is, and that is probably one reason this does not turn into more of a Club Med. 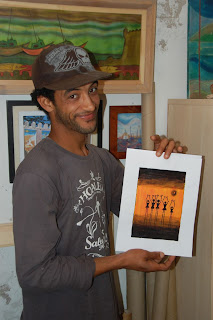 As it is, you can still see the attraction for tourists and locals alike. It's more relaxed here and the climate, aside from the wind and obvious coolness that can bring depending on the season, makes it pretty darn comfortable.
The town reminds us of Greece or maybe a coastal Italian or French town, perhaps Portugal, which is apropos as it was controlled by Portugal at one time. The ramparts are a great frame to the white washed stone houses and the surf and rocks and fishing docks give it another element we have not seen elsewhere but are familiar to us from other places we know. The blue dories and larger boats bring in the catch that helps make Morocco the world's top exporter of sardines, and haul in lots of other types of fish as well. 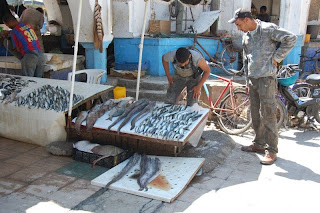 We have seen scampi, turbot, Dorado, sole, eels, lobster, shrimp, squid, sardines, and we think small shark on the docks and in the markets, plus others we don't know the names of. Here we have eaten Dorado, sardines, sole, calamari and baby squid (the cute ones), and in Marrakesh we ate eel as well. I think the sardines and the eel were my favourite
Our first meal here was in the fish souq where the best way to get you meal is to buy it from the vendor and then walk deeper in to have it cooked at the stalls in the back. They do that for you for 30 dirham, and provide you with some salad and bread to go with it. We did not realizes that was the way you should do it, but instead walked in past the stalls and sat down to order food, so the guy then went out to buy the fish and prepare it. Same arrangement except the prices is a bit higher. In a few minutes the fish (about 15 sardines and 2 dorado) arrive grilled with a bit of salt and you eat it with your hands dipped in some hot sauce, accompanied by the ubiquitous flat bread and Moroccan salad, and the almost as common Coca Cola. 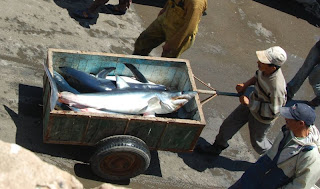 Later that day we had fish again, only this time we had it on the water front and here they weighed it in front of you at set prices which were posted clearly and did much the same in the preparation and presentation. The guy who met us here also spoke English well and was able to show exactly how it worked. In the souq I had trouble making myself understood, and I am not sure it was my French or his.

Essouira is also the site of an annual music festival devoted to Gnaoua music which is a mixture of Berber, Arabic and other North African styles and is probably the closest you can come to an indigenous Moroccan music. It attracts artists and fans from around the world, including jazz, reggae and pop musicians. Unfortunately the festival occurs about a week after we leave Morocco, though that might be a good thing as we might not have found a place to stay. The place hums to that beat all the time, plus the odd Pink Floyd and Bob Marley album in keeping with the cool jive theme to this town. 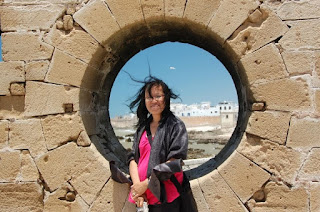 Other notable historic references to Essouira in include the fact that the rocks around here have provided the shell fish that yielded the purple dye used by Imperial Rome. The town was also the principal port of Morocco for some time as it was the closest sheltered harbour from which to transport goods brought over land from Timbuktu though the High Atlas and Marrakesh.