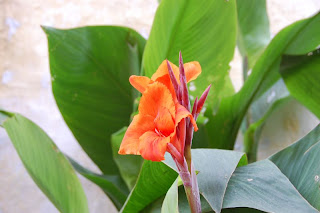 Moulay Idriss is sometimes called the holiest town in Morocco. The mosque and mausoleum of Moulay (loosely translated as Saint) Idriss I, a great grandson of the Prophet Muhammad, is here and though off limits to non musselman types like us provides a reference point in the town for us. Turn right at the mausoleum gate from the main square and up through the narrow cobbled passageway, tight at the first corner, left at the fountain, curve around and up the hill, until we find … oh look, a sign! The sign directs us down a narrower winding set of uneven stairs to Dar Zerhoune.
An extensively repaired and restored 400 year old home on at least 4 levels, this place is beautiful. The lowest levels only get natural light through the central courtyard, open to the sky above, one window over the front where I sit now in the living room on the second floor and a couple of small peepholes in the 2 bedrooms on this floor.
Higher up is the kitchen and dining area with large widows and balcony facing the sunsets in the west and above that the entire top of the house is a terrace where we can sit when it is not too hot. When it is sunny you could fry eggs on the tiled floor. 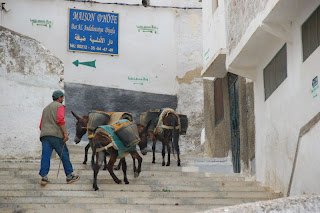 The donkeys outside are braying to wake people up for breakfast, as the roosters have not had much luck. Other than that there is very little sound that penetrates to our room. In fact after 10 or 11 the first night I could hear NOTHING. This was helped by the fact that we were the only guests that night. Last night with two Aussies in the next room it was very nearly as quiet as after being in Fes for a few days I think they really needed the rest themselves.
Situated in the hills about 450 meters up more or less, this place may get very hot in the coming months, but for now is quite pleasant. Hot by day, at maybe 30 c or so, it is very comfortably cool at night. The design of the houses helps a lot in that regard too. The houses perch, wrap around, and morph themselves into each other and embrace the hills shape in their practically organic designs. Whitewashed, with splashes of colour here and there especially on the twisting streets where the entrances lie, I am sure there are no 2 alike in the entire town.
The town is on 2 hills and from certain angles has the overall shape somewhat reminiscent of the head and hump of a camel. Of course I had to be told that but saw the resemblance once it was pointed out. 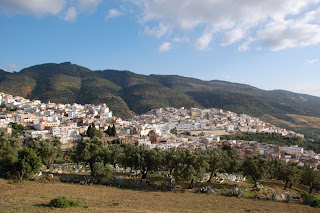 The road from Meknes took us through rolling hills covered in wheat, olive groves and other crops. The town is on the edge of more rugged almost mountainous terrain and in fact there has been volcanic activity not far from here though not recently. The town was first built around the year 780 and does still continue to grow, and in remarkably similar style.
It’s a pretty quiet place overall of just a few thousand people, though has a bustling market day on Saturday which happened to be our second day here and the population obviously swells as buyers and sellers come in from the outlying villages and all the streets become lined with their wares. Next to someone selling dates is a blanket covered in remote controls, near a carpet salesman are tables with spices and beside the strawberries are leather sandals. 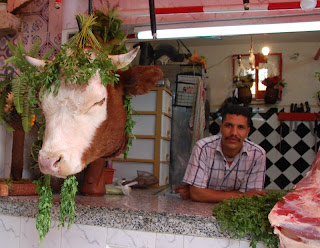 People streamed into town like sheep (we saw about 20 sheep get out of one van, and about 20 people get out of the next) as we walked out of town to take a hike to find an ancient Roman hammam or bath in the hills to the East. It took a while to find it though we did come across other ruins, some sort of bridge or perhaps aqueduct, and when we did eventually get to the site we found an older man taking his sweet time of bathing in the warm, slightly suphury smelling water. Not to scare him with my white skin or embarrass him potentially by Linda’s presence in the water (we had swim suit like things ready for a dip), we just dabbled our feet for a bit and headed back to town. 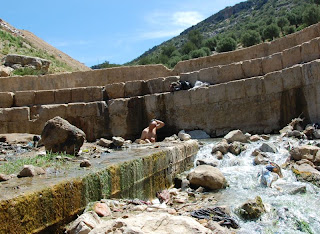 We did no shopping other than for our meals, most eaten in one of the semi permanent stalls near the main square. That is aside from our breakfasts at Dar Zerhoune and the supper that was prepared for us there. The guesthouse is managed competently by Fayssal, with help from his younger brother Eunice, and greatly by his mother. She prepared a 4 course Moroccan meal including a chicken tajine, a salad, and an delicious eggplant dish with bread and fruit for dessert, followed of course by Moroccan whiskey. It is not really whiskey of course, its mint tea, but we have hear it called that a couple of times already. It's made with green tea, fresh mint leaves, boiling water, and is usually sweetened with sugar. 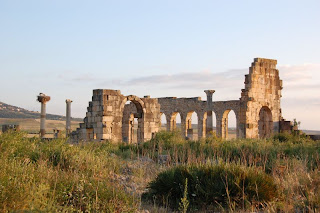 We have found that the main draw for most people to this town though is the nearby ancient Roman city of Volubulis. Many people zip out on day tours from Meknes or even Fes to see the ruins and rush back. Good for us and too bad for them, as the town is a little gem. Our companions from Canada in the Grand Taxi did just that, but at least they walked to the ruins rather than taxi over, but we don't know what they did later.


We also walked to Volubulis which is about 4.5km away on the most direct route, but we did the much longer older road that wrapped around the hill that overlooks Moulay Idriss, which provided great views and was overall more pleasant. In fact we did not even set out on the initial climb up to the old road until almost 7pm, our intent being to be at the old city as the sun set. 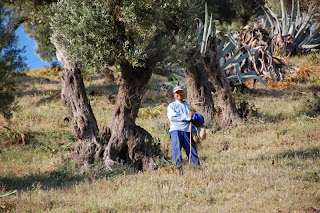 As in the town, along the way we were waved at or greeted with Bonjour, ca va?, and quite frequently. In fact at one point after we had been gazing up the slope at a flock of sheep moving along though the scrub trees and grass, a voice came from on high, Bonjour Monsieur, bonne vacances! It was the shepherd, at least a 100 feet up the hill from us. He then willingly posed for a photo.
Not long after this encounter we met a friend of Jesus. No it was not a Jehovah's Witness, though I suppose he might have been, but he did not have an edition of Watchtower in his hand. Instead he had some stiff weeds he planned to make into a broom. 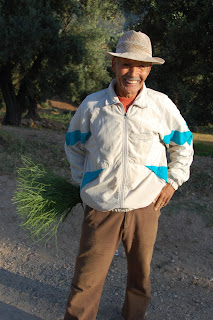 The Jesus part was actually in reference to the part he played in The Last Temptation of Christ, as an extra, a friend of Jesus. You may recall I mentioned that a lot of western films having been made in Morocco, and this was one of them, largely shot at Volubulis and the vicinity, and his village was one of them. He was a pleasant and dapper 70ish year old man who upped the cadence of his stroll while we slowed ours for a time so we could chat. Eventually however we had to bid him adieu and put it in gear again, as the sun was getting low.
Once at the Roman city we paid a 10 dirham entry fee each, and proceeded to wander about some of the huge expanse of columns and plinths and half walls and soon reached some of the more impressive sections of arches and the Basilica and then started to find the many mosaics. At first our only companions on the entire site were some nesting cranes, prominently located at the top of one of the columns. This changed a few minutes before the sun set around 8:30 as a local man approached us and identified himself as a night watchman on the site. He took a picture or 2 of us and proceeded to give us a private tour. 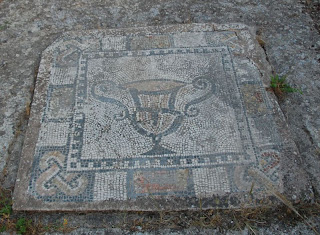 As the light was going fast, we essentially scampered over the multi acre city, mosaics to baths, wine cellars to vomitoriums, aqueducts to sewers, olive presses to granaries, stone sundials to stone penises.
There was really only one stone penis actually, about a foot and a half long relief sculpted in 3 dimensional glory on the surface of a low bench. He took great pleasure in showing us this by making sure he reached it first so he could sit on it to hide it, and then making us sit on either end of the bench facing each other, at which point he jumped off, exposing the…umm…solid, I mean rock hard…well, er…stone?...member between us. 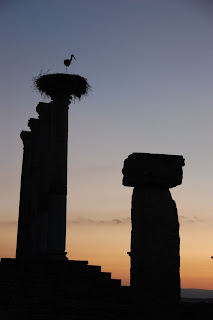 It was soon too dark to see much more so we voluntarily gave him a good fee of 50 dirham, and he gave us a little camel he had woven from a few pieces of straw as we wandered the site. We thanked him for his excellent tour, and managed to get back to town quickly in the lone Grand Taxi sitting at the gate, the driver sitting there chatting with the other night custodian. 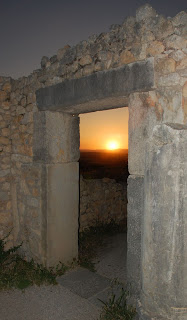 ...a bit more on this page soon, and after that Fes
Posted by Unknown at 3:04 pm