Essential Travel Gadgets, and some not.

You can't do much without a bevy of gadgets these days. I like gadgets, don't get me wrong. In fact if you know me well you would already know I love gadgets!

At home I am not tied to my mobile phone, in fact I often forget I have it, and the same goes for my MP3 player. But these days no well equipped traveler can go anywhere without at least a cell phone and digital camera. However even those things requires their own additional gadgets, like SIM cards, digital memory, chargers, headphones and so on. Here are a few of the things we are taking (for 2 of us)...


The phone will need a charger, memory card and SIM card for each country I want to use it. Headphones as well. The MP3 will need charging capabilities, memory card and headphones. Camera 1, needs memory AA batteries and charger, and a case. Camera 2 needs memory cards, charger for proprietary battery, cases for camera and lens, spare filter or 2. The  Acer Aspire Netbook needs charger and case. The Garmin GPS needs AA batteries, & maybe a cable to connect to the computer.

Just carrying a phone is tricky. Most phones are "locked" to a specific carrier, such as my Samsung which is a Rogers phone. That's fine in Canada, and not too bad in the US (depending on the contract) but if I tried to use it overseas I would pay horrendous roaming and long distance fees. By getting the phone "unlocked" (about $25 +/-), I can buy a cheap SIM card in whatever country I land in and then pay local rates for calls. This might come in handy when I need to call ahead to a hotel, the rental car breaks down or I have to call an airline. I expect to get a SIM card in Morocco as we will be covering so much ground there and probably will for France as we are meeting people, but can probably skip the Netherlands unless there is such a thing as a Euro card that does both.

Of course this means I might get a new phone # every country I visit, but since I will mostly use it for outbound calls that is not so bad, plus I may get fewer meaningless calls from home, including the wrong numbers I sometimes get.

Another advantage of the modern phone is it is also a decent MP3 player, so scratch one gadget. The MP3 player is handy at the least when trying to drown out distractions or try to sleep in jet-lagged confusion, or in noisy hotels.

A saving grace of small modern gadgets is that almost universal, Universal thing known as USB  (Universal Serial Bus). Designed for computers to simplify their connectivity requirements, it is conveniently a way in which many small electronic devices can be charged. Here's another way to leave behind a gadget or too, specifically extra chargers. You will still need the cable that has the right connector for the phone/MP3/PDA/GPS but the thing that plugs in the wall can possibly be standardized. Ah, but that's another complication.

The wall plugs will need adapters to be used with North American standard devices. A huge benefit of most small electronics and their associated chargers is that while they output 5 volts or 6 or 7.5 or whatever, they can do it if the input voltage is 110 volts, 220, 230 and at 50 or 60 hertz (that's not the rental company). Here is where it is very important to read the fine print, on the charger that is. Failing to do so might result in something between not charging (if you are lucky), and burning down the Riad (if you are not so lucky).

The power and adapters needed can be seen here.
You can see more Country specifics if you follow the links below:


Canada and the US are of course as below:

I managed to find the item to the right which will solve a number of gadget charging issues. I don't have and won't need the cable shown with but it has a USB output and has 3 types of interchangeable pins: type A, C and G (UK standard which we will leave at home). So I can plug this in and charge cell phone or MP3 directly with their USB cables. Bingo!

However I will still need at least one other type A to C adaptor for the Netbook charger and for the 2 camera battery chargers.
Oh well...

I've also decided that this kind of Energizer USB battery charger below I can do without. 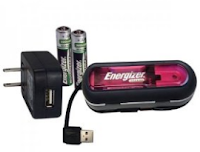 Apparently according to CNET News there is software that loads with the device that includes a Trojan that will take over your computer and potentially steal your information. I knew the Energizer Bunny was evil, but now there's proof! A Trojan Bunny?
Posted by Unknown at 10:46 pm