Taxis to Meknes and beyond

After taking the abbreviated tour of the Hassan II Mosque, we arranged with a Petit Taxi driver to take us back to the Hotel Galia, wait for a bit while we grabbed our bags, and then take us to the Casa Voyageurs train station to get going to Meknes. We joked a bit with him about the fare, as he thought that I thought the price agreed on was in Euros, not Dirham. I said, no I knew 70 Dirham was the price, and that 70 Euros should get us to Marrakesh about 300 km away. Somewhat prescient as it turned out.

Petit Taxis and Grand Taxis make up an important part of the transportation options here. A Petit Taxi is a subcompact car which operates, more or less, like the classic North American variety. They have meters, though the fare might be a set price agreed upon at the beginning of the trip. If the meter does not get turned on, and you don't know how to negotiate, be prepared to get fleeced. There seem to be a lot of meters qui ne marche pas.

Grand Taxis are usually shared taxis, in older largish Mercedes 2200's, 240D, or similar models, with mileage that is in hundreds of thousands . They don't wander around looking for fares but wait at designated sites in the cities or towns, the number of sites determined by city size, but never are there more than a few stands. They have preset prices per seat, to the fixed locations in the near towns, but typically will wait until all 6 seats are full before departing. That's right, 6, which means driver plus 2 in front, and 4 in the back.

You can pay for empty seats if you don't want to wait the minutes or hours it might take to fill the car, no discount, just 6 times the rate for 1. If you can share with a few friends, it's a good way to go. Better 3 or 4 sweaty people you know than 6 sweaty people you don't know.

At the train station we bought our tickets at 90 MAD each (about $11), for the 4 hour trip to Meknes via Rabat and a whole bunch of other stops.

Oh right, about that Euro fare I mentioned. We had agreed to 70 Dirham, about $9, and when we got close to the station Linda asked me if I had change as she just had a 100 Dirham note in her pocket. I thought I did but she did not hear me say so, so handed him the 100 and he thanked her and took off. I would have waited for him to change it or would have dug around for the exact price but no biggie...

We had to wait at the station almost an hour before the next train and while hanging around for 15 minutes or so, we suddenly saw our taxi driver show up. He had the 100 note in his hand, and at first I did not understand, after all a 30 Dirham tip was just over three dollars for us. Than we realized he was holding, and handing back to us, a 100 EURO BANKNOTE! He had not noticed at first either, but was several minutes away when he saw Linda's error, and he came to give us back the more than hundred dollar "tip" we had accidentally given him! It was not like he could not have exchanged the large amount of cash, as Euros are used very commonly there, and he probably could have used it too. I called him an honest man and thanked him profusely. Linda and I promised ourselves to look more closely at our bills from now on.

After on the train for an hour or more, I tried to explain in French the expression "milk run" to one of our compartment companions, but I was on shaky ground when trying to get across the concept of door to door delivery of milk, something that I have not seen myself since I was a very young kid. The light bulb went on when I used the analogy comme le facteur (like the mailman). I guess they don't use Super Boxes here either.

There are 2 classes on the trains, and most travel 2nd class. The only difference is that the compartments have capacity for 6 in 1st or 8 in 2nd. That's the theory. In practice 2nd class might have 10 or more jammed in. We saw that in action as I opened a compartment door and asked if there was room for 2 more, and as the 4 occupants adjusted there stuff to make room for us, 6 or 7 traditionally dressed old men and ladies squeezed past me into the booth.

We eventually found space and never had more than 3 to 5 companions for the trip, some of whom were quite friendly (esp the milk run guy, some sort of business man going from El Jadida to Tangiers). There was also a father & daughter from the very southwestern most corner of Morocco, an area in the region of the Western Sahara that is disputed over by Morocco and Mauritania. They don't go to war over it but at least in words they do. This pair think of themselves as Moroccan certainly. 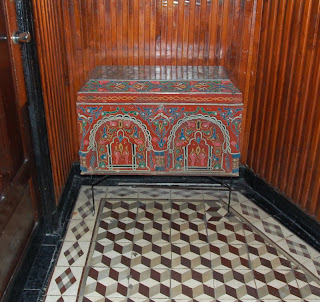 Eventually we arrived at the first train station of two in Meknes, and took the first hotel we found and probably the first hotel we could have found as it was about 1 & 1/2 blocks from the station. It was a very nice place, lovely art deco mostly with some M C Escher tiles thrown in and lots of local touches but we could have made a better choice. No problem with the room or staff at all, and the price was more than we would have liked but still ok at 342 MAD including breakfast, but no sleep was to be had for me again.

It was hard to blame it on jetlag now, but the noisy bar below our window I could single out as a likely suspect. That plus the fight that broke out, which was I think just a word battle, and the howling cat, and the street being swept, and the out of tune motorcycles, and the trains. Remember I said the location was convenient?

Oh yeah and the call to prayer that began at 4:30 AM. But it was mostly the coffee shop or bar below us...

So about those taxi fares again. Overhearing a couple of Canadians (how can you tell Canadians at a distance? MEC gear of course) at a nearby table at breakfast in the Hotel Majestic talking about Volubulis, near where we were going, I suggested we share a Grand Taxi 4 ways. The hotel guy had tried to book a taxi for us and make us pay 120 Dirham for the ride, but we knew the actual rate was 60 for the entire car or 10 per person. Sharing it with the bother/sister act from Vancouver/Toronto cost us 15 each, and got us there on our own schedule.

Actually though I should reel back to the night before when we strolled around the old medina and the souq (market) of Meknes at least for a few pics.

In the Souq you can buy just about anything, from garlic 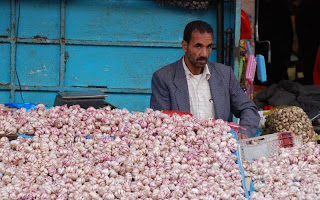 to Tajines and other pottery 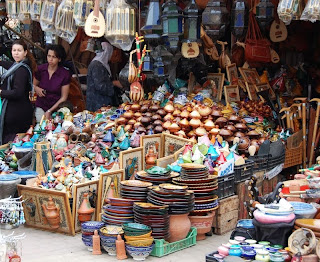 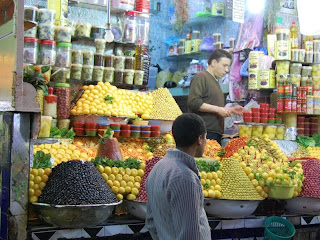 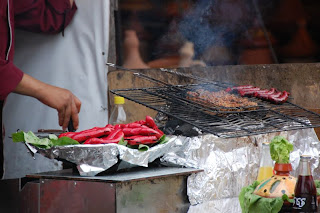 or maybe some pretty scary beasties 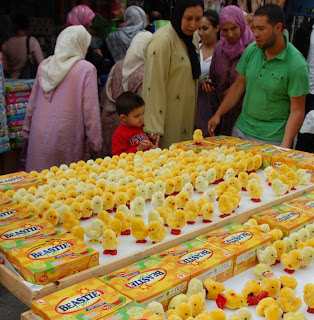 and even the Slap Chop guy had to start somewhere 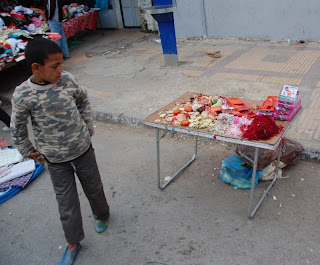 You can meet lovely ladies from Rabat (with no husband!) 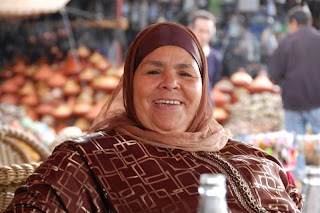 or you can just hang around 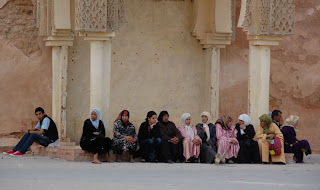 and if none of that suits your fancy, there is always Door Number 5. 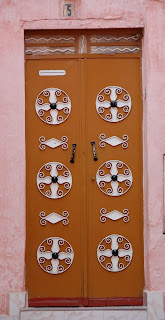 Actually I love the doors. You will see more of them.

Coming up soon, two quiet but expensive days in Moulay Idriss, and walking to Volubulis.
Posted by Unknown at 3:34 pm

Great sounding trip, nice to get off on a good start, apart from teh lack of sleep.
Having travelled in our own car through Morocco, I missed all the train and taxi variations.

All's fine on the home front.