7am, wide awake in Casablanca.
Well, perhaps not wide awake, but  I cannot sleep and am not going to try any more while Linda still catches a few ZZ’s. She says she can't sleep a lot of the time but it ain't so.  2 “days” out of Vancouver, but really only a long day yesterday with about 14 hours of air travel from Vancouver through Seattle, then Amsterdam and from there to Casablanca. Add stopovers of 1.5 hours at SeaTac, and 7 at Schipol Airport in Amsterdam, plus the getting through customs, train & taxi from the airport here; it starts to add up.
I don't sleep well in planes trains or automobiles and am a light sleeper at the best of times. So today will be spent  after 2 hours snoozing since home, or rather I will be spent. So it goes.
The flights from YVR to Amsterdam were smooth and on time. With the long stop in Amsterdam, and the quality of the transit system, we knew a quick trip into the city would be not a problem. The trains stop right under the airport and 15 Euros bought us both round trip tickets on the 30 minute train, actually 35 in and 25 out as the intercity one we took out made fewer stops. 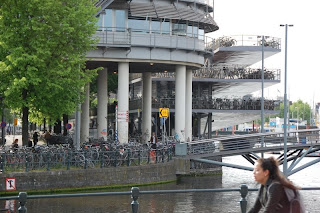 The first sight that greeted us outside was an amazing array of bike parking in the vicinity of the train station. Obviously the concept of Park & Ride here takes on a 2 wheeled connotation. There are ranks of bikes on the waterfront, on the sidewalks, on barges, ramps and balconies. Impossible to say how many there were, but thousands easily.
Of course I knew that part of the culture being so normal here, that bikes are used by everyone to go everywhere practically.  It was just pretty impressive to see so many.
You do not just see them parked though as they are moving everywhere around you, so you have to watch your elbows and your path too. The cyclists do obey the rules of the road though, so at least are predictable. The bike lanes are of course everywhere too.  I was a bit surprised to see that motorized scooters are allowed to share the bike lanes. Probably only the smaller than 50cc ones I expect, but to me (owning a Vespa myself) it appears unfair to the pedal bikes to have the gas powered things with them. Not so much for the fumes or anything, but just that scooters can travel faster and perhaps even more importantly, accelerate faster, than single speed Dutch bikes which represent the majority of the bikes I see on the paths.
We walked around the city for a while, stopped into a bike shop where I dropped a copy of Vancouver’s bike culture magazine Momentum on a table, having read it on the plane. They will probably laugh at our feeble attempts to catch up with them, and at our fixation with fabulously expensive fixies. Practically everything here is single speed and utilitarian. 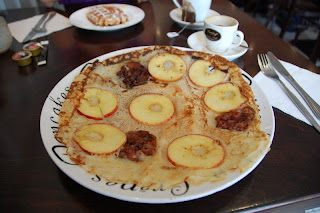 Another aspect of the Netherlands we had to soak up was some food! And where better to start than with pancakes! I had a delicious bacon and apple variety while Linda enjoyed here waffles, washed down with coffee from the espresso machine of course.
While wandering around we saw several of the cities “other” type of coffee shop, but those will have to wait until we get back here at the end of June. We did not want to get so relaxed we would miss our next flight.

The Royal Air Maroc flight we took next was a moderate distance 3.5 hour hop across Europe plus a corner of the Mediterranean and the northern part of Morocco. We could see Spain below us example, and the hills of the northwest corner of Africa.   Again a smooth flight with a lot more leg room on a half empty 200 seat 737. The biggest headache here was the loud obnoxious Dutch guy who was ahead of us at check-in and beside us on the flight. Hopefully we won’t see him again as he spends his month in Morocco. It started off with him trying to check in a bike that would have cost him $150 Euros to travel with, which turned out to be too much for him, so he gave the bike away. Then when he discovered we were Canadian, he thanked us for liberating his country, and then proceeded to loudly curse the Germans and not just the WWII Germans, but the modern day ones too.
As the city comes to life outside I suppose I should turn to current circumstances. We are at the Hotel Galia, in the center of Casa. This place we took a chance on based on them being favourably reported on in the Lonely Planet guide. It's very clean, basic, friendly and cheap. As we got here kind of late, about 8pm, they had no rooms with bathroom, but there is a shared one down the hall. It's typically funky in a way we are used to in our Asian travels. Uneven stairs, questionable decor, strange bathroom layout (you can't get in the shower without serious contortions as the doors to the stalls open inward and are as wide as the stall so you there is no way to get  behind the door to close it….stuff like that). 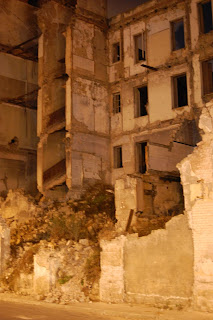 Not our hotel, but not far
It is also on a street that bears some resemblance to a scene from a movie about trouble in the Middle East, where at least 2 large buildings are just shells that look like they have been bombed out. I know they have not been bombed … I think. Actually there are a lot of older colonial buildings in need of serious repair and they would probably be beautiful if done right.
The location is right in the old city centre and a block from the central market. Rate of 220 Dirham (MAD) and a great breakfast for an extra 25 each, so about $30 spent here by us. Well worth it, I would say.
Next morning we planned to do at least one touristy thing and then get out of town so did not stay up or out late. In fact I don't know that it felt all that comfortable out at night anyway as the district is a bit sketchy though not downright menacing. The cities here do bring out a different breed at night and in general it might be best laying low in a lot of neighbourhoods, though of course not everywhere.
We did need food though so went out for a fish dish a couple of blocks away. It was a plate stacked with several lightly battered whole fish about 8” long, squid rings and prawns. Served with large bread rolls and tomato and chili sauces, it was simple and quite good. The biggest problem here was the aggressively scavenging cats but the street urchin types stayed away probably fearing the wraith of the restaurant employees. 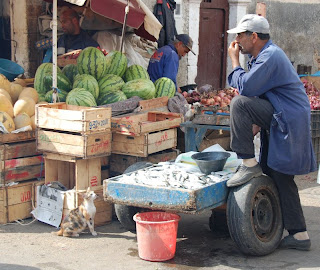 The one touristy thing was more than one in fact. We walked from the hotel though the city, eventually reaching the old medina of narrow lanes and stalls of food sellers interspersed with everything-else-sellers. Turning down offers of guides was made a lot easier after we caught sight of the 200 plus meter high mosque, the main attraction on the water front in Casa. The Hassam II mosque is a monster mosque.
We latched onto the tail end of an English speaking tour that had already been inside the mosque (you see one mosque, you've seem 'em all said Linda), so only caught a bit of it, specifically the hamman or baths downstairs . We avoided paying for the tour that way, but also wanted to get out of Casa soon so took a taxi back to the the hotel and from there to the trains as we di not want to be too late in Meknes, our next destination, partly because we had nothing booked ahead. 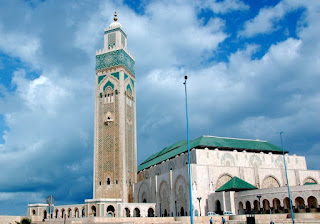 Anyway this huge place, the third largest mosque in the world, was a recent construction over 8 (or was it 12?) years at a cost of a cool half billion. Not Dirham, Dollars! The King obviously wanted to impress, of course not without detractors who would have preferred more money on social programs and useful infrastructure for this developing but still poor country. Apparently the unemployment rate is something like 40%. At some point it might be better to talk about the employment rate.
Here's another shot to illustrate a bit of scale, and another to give some sense of the colour and detail. 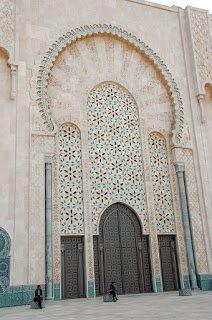 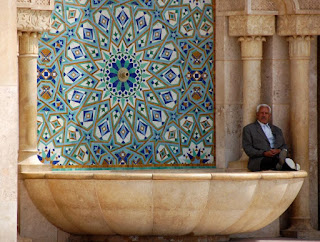 Coming soon: expensive Petit Taxi in Casablanca and cheap Grand Taxi in Meknes, plus The View From Moulay Idriss.
Posted by Unknown at 7:11 am