I love maps, and hate getting lost. I don`t like asking for directions, and Linda sucks at reading maps, even when she has them right side up.

I own at least 3 atlases, mapping software, use Google Earth and have at least 2 GPS units.  I`ll probably reduce that to one, but maybe not. The jury is still deliberating on that one.

Atlases, software and Google Earth are not very portable. iPhone and Smart Phone users may disagree, but at least they don`t lend themselves to walking around with in hand. Real mapping GPS units can be pretty easy to carry around nowadays though.

Newer models like the Garmin Colorado 300 are very quick and accurate, have a lot of memory and do a lot of stuff. This particular model is not perfect with some issues like so-so battery life and not the greatest visibility in some lighting conditions plus some esoteric shortcomings the Geo-caching nerds will miss, but it is a big step up from the earlier generation models I have used previously.  Acquiring quickly and holding onto Satellite signals in less than ideal conditions is nice to have at your disposal.

Having a SD memory card slot with 4 gigs in it is also handy. Not that I will need it all, but the huge memory capacity allows me to have the base map the unit came with, plus a full set of Topo maps for Canada that I already had, plus a Morocco Topo map, and City maps for Europe for later in our trip.

The Morocco map I got here: http://www.island-olaf.de/travel/marokko/gps.html

The fellow responsible for creating and hosting it I came across on the Lonely Planet Thorntree forum site. He has been quite helpful there and even had a great link to a list of hotels, with GPS coordinates of course!

I have not asked him for permission to link to his image and map page, so I guess I should head on over to Thorntree and let him know.

That is not it for gadgets. Related to maps and knowing where you are is helped with a decent pair of binoculars of course.

Binoculars are one of those things where bigger (or more powerful) is often not better. Too big, bulky, heavy...whatever.. and you won`t want to carry it. Too powerful and they can become very awkward to use.

Don`t get me wrong; high magnification can be very useful if things are very far away. Mountains in the distance, ships on the horizon, or astronomical viewing of things potentially light years away is best with high power, such as 10, 15 power or more.

Things at nearer or intermediate distances are best viewed with lower magnification power such as 8x or less.  At high power it is very hard to hold the glasses (or telescope) steady enough to keep something clearly in sight, plus the field of view usually becomes too narrow and closely defined. If you lose sight of your intended visual target it becomes very hard to find it again with a narrow field of view. With a bit lower power you will still get a much closer view of the distant objects, and while maybe not quite as close, you have the advantage it being much easier to find and hold the subject in your field of view.

With that in mind my travel binos will be the Pentax Papilio 6.5 x 21 as shown below. Of course 6.5 refers to the magnification power and (I won`t get into the technical side too much) the 21 is related to the light gathering ability, or how bright they are in simple terms. In this case the larger the second number the better; so 21mm is not big. The problem being with larger objective lens diameter (21 vs 32 vs 40 vs 50 for example) the weight and bulk of the binos is going to go up considerably mostly because larger lenses are required. Brighter is certainly better in low light conditions, but comes at a cost in size and weight. I have higher power and brighter binos, but at maybe twice or more the weight and volume, I'll usually leave them closer to home.

Another really neat feature of the Paprilio models from Pentax is the close focusing they can achieve. You can see clearly at as close to about 18" or 1/2 meter. This is a lot closer than most binoculars and it seems a bit of an odd specification to be pleased with for something usually used to see things far away, but it seems so far to be quite handy. It is almost like a handheld microscope in use as it allows you to zoom in on closeup flowers, insects, or even architectural details. I like it and combined with the image quality, relatively light weight & compact size of this model I think it might easily become my favourite pair of the 3 or 4 sets of binoculars I have.

Yeah I know, too many gadgets!

Another technical gadget we are taking is a Steripen. I hate buying bottled water for a host of reasons.

Here are just a few:

Bottled Water's environmental impact:
Bottled water sucks. In addition to the reasons above, you really can`t trust the water that is in those plastic bottles or what happens to the bottle it is transported in after it is empty.

In the USA the EPA controls standards for tap water and holds it to a higher standard of purity than is required for bottled water sold on the open market. This might vary from place to place, but just because something is sold in a `sealed` bottle it does not guarantee it`s inherent purity.

We traveled in SE Asia a couple of years ago, and tried to avoid bottled water when there. No wonder when articles in Reuters say things like this:

as incomes have risen, more people have been buying bottled water. Twenty-litre jugs that sell for around 50 US cents are affordable for most Vietnamese. However, tests on hundreds of brands across the country reveal that bottled water cannot be trusted either. Dozens of samples failed safety standard tests in Ho Chi Minh City in March 2009. "We detected bacterium in our samples, mainly coliform and Pseudomonas aeruginosa," said Le Truong Giang, deputy director of the city's health department

In North America, Europe and other places in the developed world there may be very highly developed and widely utilized standards for plastic recycling for the empty bottles, but you can`t count on it elsewhere.

When I was in Guatemala a number of years ago we bought bottled water to avoid drinking the tap water which we felt we could not trust. It was practically impossible to buy anything that was not carbonated (acqua minerale), but it was also very hard to actually walk away from most small vendors with the bottle. In a well meaning effort to reduce the waste stream associated with empty plastic bottles the Guatemalan authorities had recently instituted a deposit system for the bottles.

However this backfired and most people in small shops would not collect a deposit, but would instead pour the contents of the bottle (water, Coke, Fanta , or whatever) into a small plastic bag (``boursa``) with a straw and hand that over the counter. Even if you offered to pay more for the bottle and not bring to back for the deposit they were reluctant to let it go. They would not have to worry about collecting and paying out the deposit this way. It also lead to plastic bags and straws being strewn everywhere, a really distressing form of garbage we saw all over the place in some villages.

As an aside, but still on topic, my partner Kathryn managed to contract Hepatitis on that trip and it was most likely from the water. I also picked up something in my gut that did not make me as sick as her but did affect my GI system for at least a year of 2 after that trip. 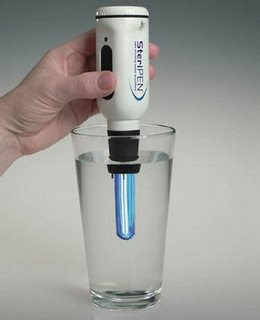 So I intend to take along a Steripen and use it to help insure that the tap water we drink is safe to do so. Using this and filling a 1 litre or so bottle we each carry should reduce our impact at least a little bit, while lessening our risk. I have not heard much to indicate that water quality in Morocco is suspect, but...

In a nutshell, the Steripen works by killing the nasties in your water by bombarding them with UV light. It is not a filter, so we will not be using it with water we take from scum covered stagnant ponds, but even water that comes out of a tap may also have invisibly small baddies in it that this might take care of. As we are not really going backcountry, we should be able to avoid the need for taking water from scum covered stagnant ponds, or at least I sure hope so.

Our Hep A shots are also up to date. Fingers crossed.
Posted by Unknown at 9:40 pm