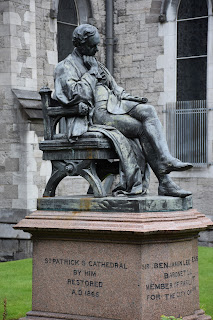 Today was a hop on hop off kind of day. We started with breakfast at home, after making our emergency coffee maker with aluminum foil made in a funnel and gauze from the first aid kit as a filter. It worked ok and the filter is even re-usable. Eggs, bacon and toast from the store down the street. Can't remember the chain but it's not Tesco.

After that we wandered down Cork Street towards St Patrick's Church and jumped on a Hop-On Hop-Off bus. Tickets were $19 each but Emily's friend Leah insisted on buying the tickets yesterday. Thanks Leah!

The route of course travels past all the major sites in the inner city. We like to walk around but this gives us a cheap way to see more than we would on our own and with a bit of narrative. The semi-open top double-decker wasn't crowded, at least not in the early part of the day. I think we got on around 10.

Our first hop-off was at Kilmainham Gaol which I would highly recommend as a stop if you are at all interested in Irish history. We took the 1/2 hour tour which was just 4 Euro each, but we also had more time to wander the museum and the old court room and holding cells. 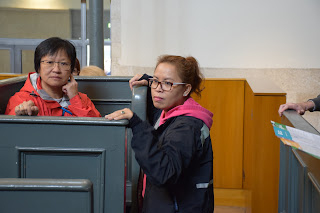 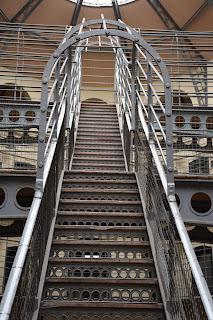 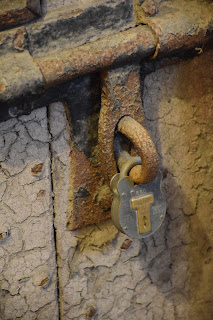 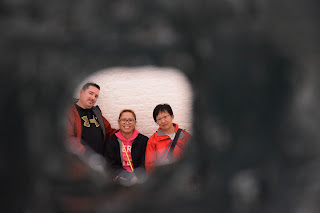 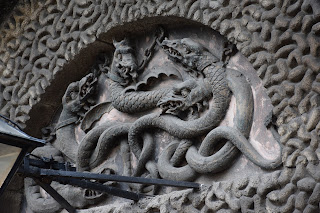 The displays were quite sobering especially about the period of the time around the famine when the population of the gaol exploded to thousands per year. Many dies here as well and many other sepent time here for the pettiest of crimes, including a child of 5 who spent 2 months here for stealing food. Actually, during the famine, this was one place where you were guaranteed at least one meal per day.

There is also a lot of history told of the revolution and other political strife plus some chilling displays about hungers strikes by the suffragettes, right up to Bobby Sands. 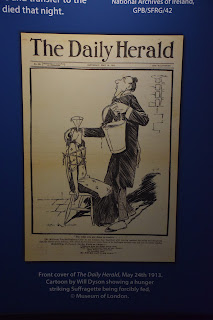 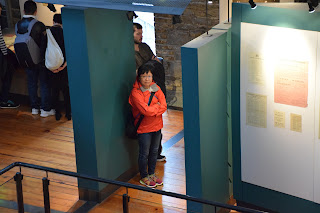 Anyway, that was an hour or so well spent and our timing was good. When we came out they were booking for tours 3 hours later in the day; we only had to wait about 30 minutes.

Our bus now took us around the vast (64 acres!) Guinness factory and store house. We didn't stop in but will go there tomorrow. After this we headed up hill and through Phoenix Park. It is the home of Dublin's Zoo, the US ambassador's  residence and other important political buildings and monuments, not to mention about 300 fallow deer. 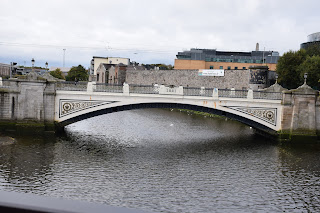 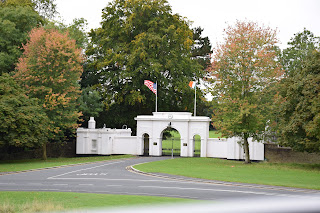 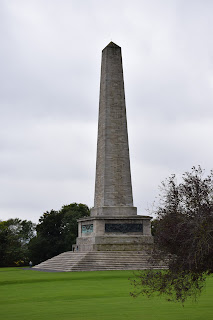 We didn't get off here but went on further past some big old house by Bono and The Edge, or Bono, or The Edge. Whatever... 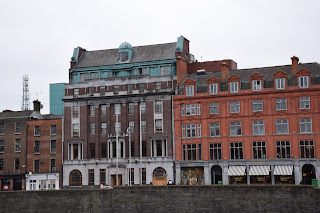 We had a lunch date coming up.

Emily's friend Leah lives here. They worked together a bunch of years ago in Saudi Arabia and she has lived here a long time with her husband Sugar (I know he has a name other than that but that's what I have to call him right now until I remember it. I do know he has been pretty sweet so far, picking us up and dropping us off for example). We went to their place for lunch and back for supper too and were feasted Filipino style before being driven home. They actually live very close to our apartment. "Breaking news: Sugar's name is Darwin"

We did manage to escape for a bit though with the intent of doing a bit of shopping for some essential victuals (and coffee filters) and a specific pub called Hartigan's that and Irish  friend insisted we check out. They turned out to be closed,  which I though was likely a crime in this country. However we managed to find another very close as I am sure you can imagine.

It was a bit of a tiring day and we are still not fully adjusted. There's snoring coming from both bedrooms now and think I must join them. Tomorrow, The Book Of Kells at Trinity College, Guinness Storehouse and some more shopping I think. I'll add some more photos from today at the end here later. 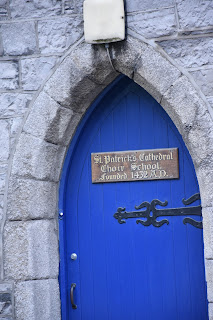 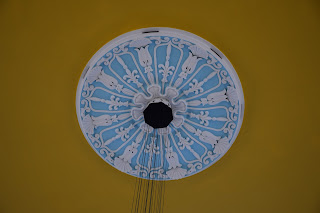 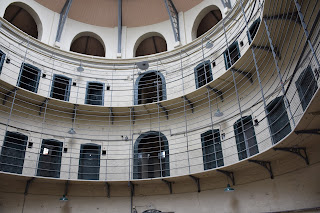 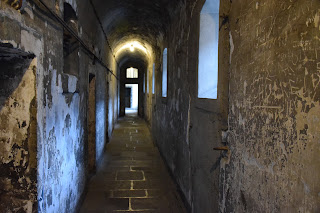 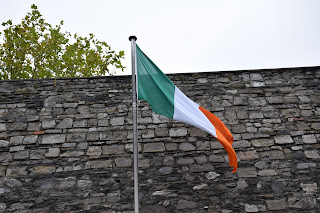 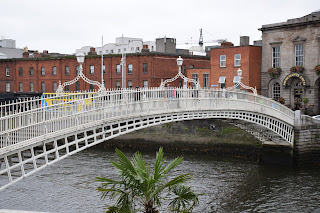