Where The Roads Have No Name 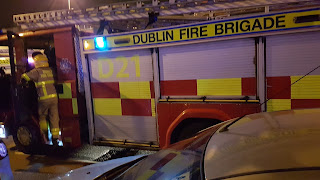 Today dawned twice for us. The first was at about 4:30 this morning when we were startled awake by the proverbial infernal racket of a fire alarm. It was so loud and shrill, and not a sound we were familiar with, that it took us a minute to pinpoint the source. I thought at first for example it might be a clock hidden in a drawer or something, but it turned out to be the ceiling mounted alarm in our kitchen.
Once we found the source we all threw our clothes on and exited the apartment into the back courtyard and from there out to the  street out front. If the building had been burning we would have actually had to re-enter it to get out the front door. From the back where we were there might have been an exit but we don't see a way to get out there.

Around a dozen other people, probably all tourists too, appeared from other suites and we all ended up congregating on the sidewalk. Some of them took quite a bit longer than us to get out. We grabbed our passports and wallets only (well my camera bag, but that had the passports in it). Nobody knew the source and the fire department wasn't on the way that I could tell even though there was a loud alarm and flashing light outside too. I ended up being the one to dial 999 (equivalent of 911) and called in the fire brigade. A few minutes later 2 trucks and a car showed up.

It turned out to be nothing. Our AirBnb host confirmed later that someone in the building was making some later night munchies and burned them, setting off the smoke detector. It was awfully nice of him (the perpetrator that is) to not even say anything to any of us that the risk was actually gone and there was no real fire. He took several minutes to even appear and it was only to try to overide the alarm panel, unsuccessfully.

Anyway, the brave young lads in yellow soon declared the place safe and we went back to bed. We managed to get another hour or 2 at least.

Our hero Darmin showed up at 9 and we managed to get all of our luggage in the small truck space of his car and he drove us out to the airport Europcar rental counter. The lady there suggested we upgrade the size of the car and managed to get us a midsized Renault SUV. She also gave us a GPS unit and we paid extra for all the insurance coverage we could. Not having driven on the wrong side of the road before, we figured this was a good idea. Doug and I are the drivers. We soon found that the car had built-in GPS but my phone became the one we relied on today mostly as I had the addresses already in it and know how to use it. 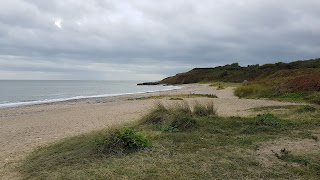 Driving south from the Dublin airport involved the M50 ring road and we stayed on it until a while after the city and then headed for the coast. Scenic and slow was more our style. It turned out that, so far at least, I had no problems with the left side driving. We had a couple of minor but inconsequential slip-ups  and one wrong turn that took us on a roundabout route back towards Dublin before we could get back heading south again.

A few spots gave us some wide vistas of the ocean which was very calm compared to the day before in the north. I strolled on the beach a bit near Wicklow. Once off the highway the roads were narrow and twisty but in good condition. 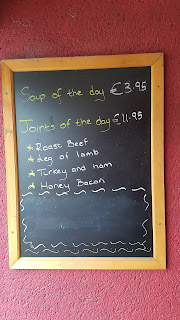 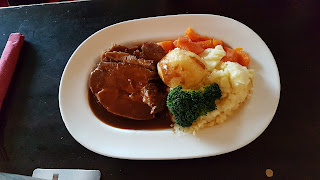 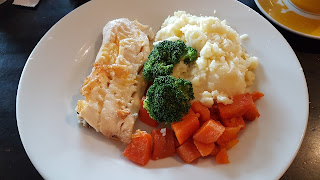 For lunch we decided to head for Arklow. I chatted with a local on the beach who suggested a pub for lunch but when we got to town it wasn't where we thought it should be but a parking meter guy sent us to a nice hotel bar where we had a great lunch. Being the driver I had a coffee not a beer, and I found the difference between a coffee with cream and a white coffee. The cream was lovely, but it would have been more at home on top of a hot chocolate or a cake. 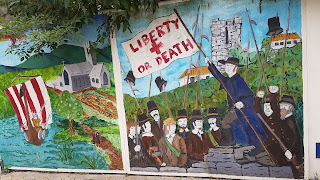 We walked the streets of the quaint town a bit and then headed out with our GPS (my phone) leading us to New Ross. It's a good thing I had it as the place has no obvious signage and even the photos we had of it would not help us identify the driveway from the street. The road to it was the narrowest yet and almost enchanted forest like in its darkness of stone walls and overhanging trees. 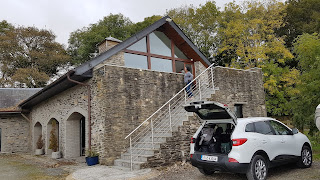 And the place itself is terrific. All rebuilt from the ground up, it is an old country estate and we are in the also completely rebuilt, comfortable and modern, old barn. Only issue here is the Wifi somehow won't get picked up by my laptop, even though the phone finds it.

Tesco is just down the road too; the big road that is, not the one we are on. 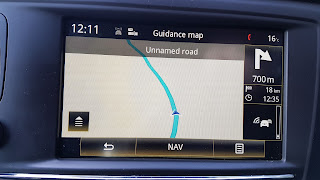 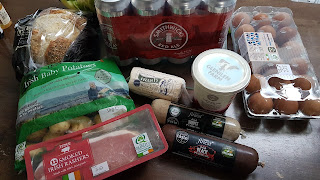 And Tintern Abbey is close by and on the agenda for tomorrow.