After 2 Days In Tokyo 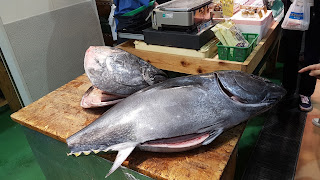 I'm writing this with a BlueTooth Apple keyboard and an Android phone with a mini mouse attached. It's pretty portable but it can be a bit awkward for uploading photos and stuff, so that mostly has to wait.

So, Tokyo is pretty crazy! It's busy, bright, loud, and brash. We are in the middle of the Shinjuku entertainment district, which is well situated but a bit of a zoo. There are cinemas, arcades, karaoke bars, virtual reality games, girly bars, pachinko parlors and no end of other entertainment options in the area just outside our door and for many blocks around. There is no lack of eating and drinking options for us. Shopping is also close by.

The Shinjuku station is one of the larger hubs so we can get around from here quite readily too. Yesterday we went from here to Akibahara, known for the electronics and other gadgetry available there. We also travelled over to the other side of our district to check out the view from the 45th floor observatory at the Tokyo regional government office buildings. It's free to do and well worth it, seeing the contrast from one side where the buildings are huge and modern, to the far side where they very quickly seem to be down to 1 or 2 stories.

Later we found a great little hole in the wall grill bar. We spent a couple of delightful hours here eating shrimp, tofu, liver, noodles and put back a few beer. Our Japanese neighbours on either side were fun to joke around with despite the language barrier.

The next day we headed out to the Tsukiji fish market. This is the site of the famous tuna auction but were not so keen on getting up at 4am to get there early enough to see it in action. It's very much a working venue but absolutely thronged with locals and tourists, especially today being a Saturday. 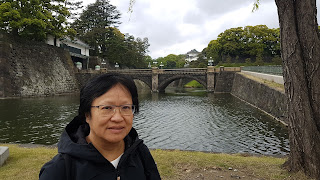 After this we walked to the grounds of the Imperial Palace just to see how the other half lives. Rather than taking a subway we just strolled, taking about 45 minutes to get there. A crab cake from the market and a latte in a can from a vending machine was enough to tide me over.

More shopping ensued when we got back to our neighbourhood and then we headed out to Memory Lane. This area is a small block with 2 or 3 narrow alleys jammed with small restaurants that seat from 10 to 20 people each, in about the space you would think you could sit 5 or so. Smoke wafts through the area from the charcoal grills, and from the cigarettes of the patrons. It's a great experience if you can get yourself squeezed into one of the places without waiting too long.

We could wander back to our hotel in about 10 minutes from this area. It's not a bad place at all and very quiet inside despite the racket outside. All mod cons as they say with the toilet that does most things you could imagine a toilet could do.

Breakasts have been either noodles or rice bowls with meat and onions and egg on top. Today it was served in the company of a few groggy punks who obviously hadn't been to bed yet.

Our Japan Rail pass is best for longer distance travel but it also works on a few lines (Chuo and Yamanote especially) that are good for travel within Tokyo. We just have to flash them and ride at no charge. So far we have only paid for the subway on 1 trip.