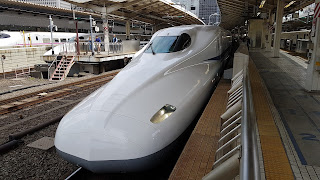 We are now on the Shinkansen (bullet train) from Tokyo on our way to Hiroshima. It's a 3 train ride if we count the Chuo line from Shinjuku to the Tokyo main station. It will take about 6 hours, 5 of that on the inter-city high speed trains. This is all covered by our JR pass again. Unreserved seating on this car and our tickets but we were at the head of the line for the 120 seat car, of which every seat is now full.

Shortly we will pass the area of Mt Fuji, though I doubt we will see it as it is a bit overcast today. We had thought about a day trip there from Tokyo but decided against it.

Instead we spent another day wandering the streets and parks of Tokyo. Some of the names of the areas and shrines escape me now and I am not going to dig for the little guide book that has some of them mentioned. Our trips yesterday crossed the city a couple of times, partially because we really didn't plan it, but with the free trains rides and the frequency and speed of them it was no big deal. We also walk lots and don't mind it, so if a trip involves a transfer to another line or a 20 minute or so walk, we often skip the train and the potential of getting on the wrong one, or going the wrong way, and hoof it instead. We probably see more that way. And argue more too, especially about which is the right direction. 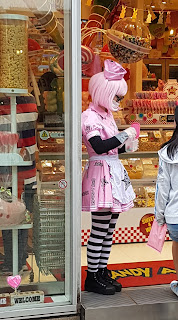 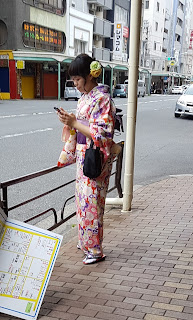 Meals have been usually a bowl of noodles or rice with toppings in the morning, a snack or 2 through the day, and a funky little grill joint for dinner. We've really enjoyed the food. Probably not getting enough green veggies but we try to get some. A couple of places have served some really nice cold cucumber dishes with miso based dips. Otherwise it's grilled chicken bits (liver, heart, skin and other parts included), batter fried yam, crispy fish with mayo, and other tapas-like bites. We top it off with soba noodles or grilled rice. And of course wash it down with beer, or a non alcoholic beer-like drink served with ice, called Hoppy. 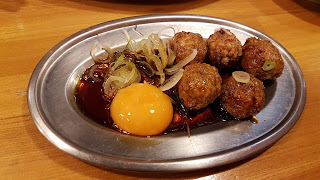 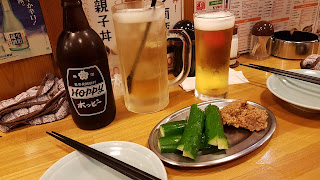 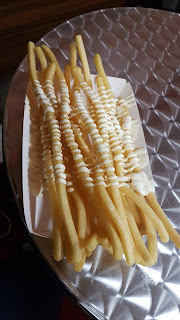 These little restaurants are cramped but super fun and easy to handle. Eventually we will want our own food but we could get by on these for a while. The staff sometimes speak English, sometimes not, but are always friendly and accomodating...well, there was that one guy...

It's going to be nice to get to a slightly slower paced city though. Our next stop is an AirBnb in Hiroshima and the host Sakura says he will meet us at the tram station, which is a short distance from where the train spits us out.