Spring in Hong Kong and Japan 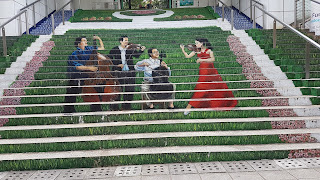 Linda and I have a had a lot on our plates at home lately and needed a break again already. We enlisted the aid of a travel agent she knows and booked a couple of tickets to Hong Kong and Japan.

Hong Kong is old hat for us but it was part of the cheap air package price so we stopped there for 2 nights, and then are spending 12 days in Japan. I've never been to Japan and for Linda it's been a very long time. 12 days is not long but we are not going to move around the country that much, spending 4 nights in Tokyo (that hotel was also part of the package), 3 in Horoshima, and 4 in Kyoto. We travel back to Narita and home to Vancouver on the last day from Kyoto.

Hong Kong was very much as we remember it, busy and loud, a bit dingy except where it's slick and glitzy, but easy for us to get around in. We really only had one full day after coming in late from Vancouver. We took the fast train into Kowloon, grabbed a free hotel shuttle part of the rest of the distance, to a fancy hotel from which we walked the last 10 minutes to our windowless 8 x 10 room on Nathan Road in Tsim Tsat Shui. The room was an AirBnb and not bad but very plain. Clean and secure with a decent bathroom and very convenient.

I won't bore with pictures of a room...

Our entire Hong Kong experience amounted to walking around some of the markets and streets in the Nathan Road area, Dim Sum at the BP International House, steamed fish at the same restaurant in the Temple Street market we have been to before, a stroll and sitdown in Kowloon Park, and a Star Ferry ride to Central and back. Not a lot else.

Actually there was a touch more. We met a fellow audio nut (a New Zealander) whom I encountered online, so I could deliver to him a phono cartridge he bought from me. I actually mailed it to him months ago but for some reason the HK Post Office sent the package back to me. It was total coincidence that we were going to Hong Kong so we brought it with us rather than mail it again. Having a borrowed sim card with a bit of text and data still on it helped arrange the meeting. Regrettably we had to make that at a Starbucks as the coffee shop that he remembered in the area was not there.

We definitely found prices in Hong Kong have gone up. It has been several years admittedly but not much is a bargain, even basic meals. Linda only made one purchase, of a nice shirt for about $10, and I have a new Bat Signal luggage tag that cost about $1.50. Big spenders... 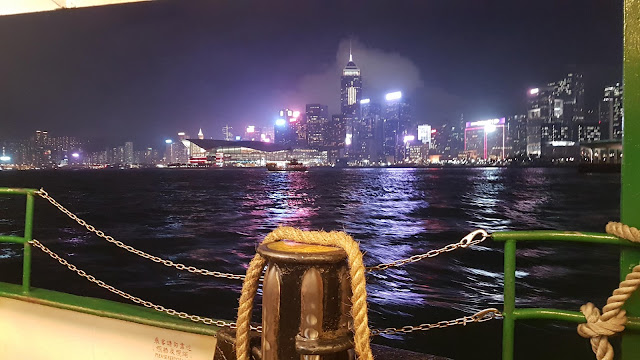 Hong Kong was a nice interlude but not the real point of this trip though. We got the A21 bus from across the street from our room, paid with the Octopus cards that were also lent to us and on7 out to Lantau Island and the airport.

This leg was on Cathay Pacific, They get my vote next time as we had good seats at a bulkhead, getting our meal before anyone in our section, food was reasonable, and they had a camera below the plane you could access from the video monitor in front of us. They also put up remarkably well with the bitch behind us who kept demaning Heineken from them, unopened, probably so she could take them home with her. But the best thing was that they had Haagen Das ice cream.

A 100mph taliwind helped to get us in on time despite leaving a bit late.  After landing in Narita airport though things slowed down a lot. Customs and baggage was fine, or at least normal. However we also had to pick up our Pocket Wifi Hotspot and our Japan Rail Passes.

The Pocket device is a nifty thing that keeps you connnected with your mobiles devices through a local wifi network that travels with you, giving high speed access to the web though the cellular network. Kind of like getting a sim card with data but easier to configure and allows more than 1 device to use it. Linda and are both able to access it at the same time with our phones. I'm not using it direcly right now (the hotel has wifi of course) but it travels with me in the shoulder bag and gets charged every night. It's about the size of a small cell phone. Having Google Maps on the go is very handy.

Anyway, picking that up was easy and quick, once we found the right counter, as we had ordered it in advance. The Japan Rail Pass was also ordered in advance but we still had to turn in vouchers for the actual passes. This line-up was painfully slow. It took about an hour to get them and by that time the last Narita Express had left and we had to take the milk run train to the city. That took about 90 minutes and then we had to change trains and go another several stops to Shinjuku station. Our hotel is near there.
Posted by Unknown at 11:37 pm