Warning, fairly graphic photo below especially if you are a dog lover

We did not know exactly when we would get to Vietnam, and today we almost made it. So close we could see it and smell it, and almost touch it. Details to follow.

The trip has gone off very well so far. Hong Kong was easy to navigate and find the things we needed. The worst part was the crowdedness and noise.

The hardest part was finding someone who knew where we could buy train tickets to get into China. The locals most often seem to have very little sense of anything outside their own sphere (their "ken" as Robbie Burns might say), and either did not know or steered us wrong. For example one helpful guy sent us to the ferry terminal to buy train tickets, and a travel agent all of 2 blocks from the CITS (China International Travel Service), had no knowledge of it.

We eventually did get our tickets from CITS on the KCR (Kowloon China Railway) to Guangzhou, about 1.5 hours including customs. We then taxied to another station and bought tickets to Nanning, and spent about half what we expected to pay for Soft Sleeper, 550 Rmb for both of us (about 70 CAD).

We had a few hours to kill before the late afternoon train left, so found a place to check our bags and wandered. We soon came across an interesting collection of vendors. Instead of trying to sell one article at a time to tourists (we did not see anyone else who obviously were travelers), these stalls seemed to be wholesale watch and clothing sellers, actually promoting their factories in bulk.

Signs in official Communist red and yellow proclaimed that counterfeit products were a bad thing. I don't know if Calvin Klein had personally approved all the underwear vendors undercutting his drawers, but the regime had, so it must have been ok.

We saw one curious thing and one disturbing thing before getting lunch and Oolong tea and going back to the station.

The curious thing was how many black people, mostly men, we saw in this part of Guanghzhou. Dozens at least, if not hundreds. Some had slightly Muslim appearance, and we thought we heard a bit of French spoken and saw some tribal scarring. It looks like there is a west African connection here somehow.

The disturbing thing was the group of very mobile sellers of animal pelts. I say mobile, as their wares were on the fringes of this market district on hand carts probably so they could skedaddle very quickly if a clampdown was coming. 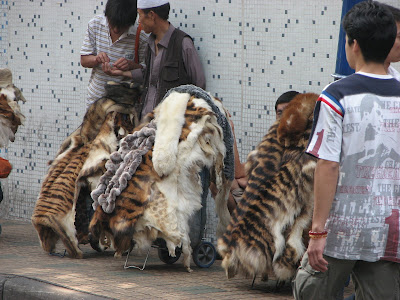 The disturbing part of course was not the how but the what. They looked like small tiger skins, and other pelts of I don't know what else. I might be looking this up when I get home but I don't think they were selling legal wares, and they knew it. They are the only people to object to me taking a picture so far so I just moved further away and zoomed in. There was obviously nothing we could do about illegal poaching of protected species, so we moved on.
.....

A bit on train classes in China; there are 4 classes: hard seat, soft seat, hard sleeper, and soft sleeper. Prices rise with each one, but so does comfort considerably. Soft sleeper gives you a semi private 4 bunk room with lots of pillows, super warm comforters, LED lighting, slippers for everyone, frills on the mattress covers. We had a young Chinese couple for roommates, enjoyed some limited conversation with them and had a pretty good rest on the 13 hour train ride.

We were spat out about 5am, into a pretty clean and modern looking plaza, and soon had a noodle breakfast and then another train ticket to Pingzhiang. These were the hard seat type, where you really get to know your neighbours, but it was only 3 hours away.

On the way we made small talk with some locals who were friendly and curious. The older woman with the baby in the back sling sat next to the young girl taking cell phone photos of us and text messaging someone. 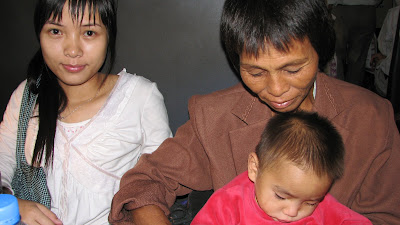 We also met a young couple from Canada. Their trip had begun in Japan and they also were heading for Hanoi. We agreed to try to share a taxi to the Vietnam side of the border, and once off the last train in China negotiated a cheap price of 20 Rmb via Tuk-Tuk for the 4 of us to go the frontier, 20km away.

The rattle-trap we crowded into could barely make it up the hills and the motor was shut off on some of the downhill parts to save gas I guess. I literally could have run faster in parts. If we had bounced any higher over some of the bumps I might have had to, after regaining consciousness of course.

Here is where plans went out the window. Our Visas for Vietnam would not allow us in for 2 more days!

Not knowing when Exactly we would be here, but having calculated something along the lines of Hong Kong for the 27-29, and the 30-31 to get here, meant going into Vietnam on November 1st, and when we planned this we requested the Visa entry to be from that date. However we left HK on the 29th and got here on the 30th, and did not even think about our Visa dates until on the train from Guangzhou.

They were nice enough about it, but the Chinese did not let us out, knowing the Viet side would not let us in. They even called the other side to ask, but no dice and the soldier guy at the border gave some info on hotels in Pingxiang.

So here we are Pingxiang, middle of nowhere, for 2 nights. Hotel (50¥ or $6) and everything else is cheap, and the topography is very neat, with karst mountains like Halong & Guilin. Not too hot or humid, and the air is cleaner than HK even with all the 2-strokers. There is a huge open air market with lots of interesting foodstuff. Bee wine, pig snouts and dog (!¿!) being some of the more unusual things. None of which we sampled, though had (guess what?) noodles! 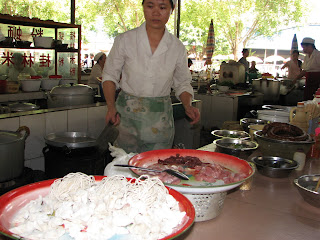 We actually had great food there in the market and went back to the same stall twice. The woman running the stall was happy to see us come back and I don't think we tried even half the various pickles and other toppings for the noodles. Simple food but quite varied at the same time. Yummy! 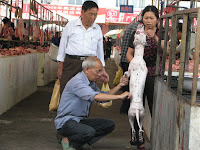 Our friendly neighbourhood Tuk-Tuk driver and Money-Changer brought us here (we did say cheap),and will pick us up early on the 1st to take us back to the border.

And now that we have somewhat mastered this Chinese Language computer and back-doored our way into the internet (outernet to the Communist masters, I imagine), I can post this!!!