Hanoi But It Ain't The Hilton 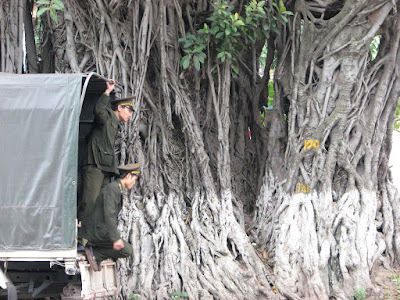 Here I am in the Thu Giang guesthouse. Free Internet and an English Operating System help, not to mention there does not appear to be any weird clampdown on internet access. I may make a few more spelling mistakes than usual as the keys are all worn, but small potatoes really.

This place is cheap, even more so than the last 2 nights in China. The room is actually kind of dingy; the room for the last 2 nights was probably worth at least $10 per night relative to the price of $7 here, but they do take Visa and the family that run it are pretty nice. I think though the biggest thing this place has going for it is that it is a VERY quiet location relative to the place in Pingxiang and to just about every other street we have been on in Hanoi so far.

The din is almost incredible out on the streets nearby but this place is in an alley with almost no scooter or other traffic. I actually saw a room at another place that had much nicer rooms for $10, but it was on one of the busy streets and was the first place we saw so we walked over here.

By The way I have noticed some similarities between the traffic system: 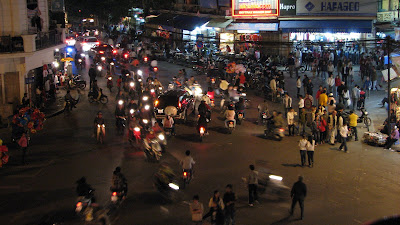 and the electrical system: 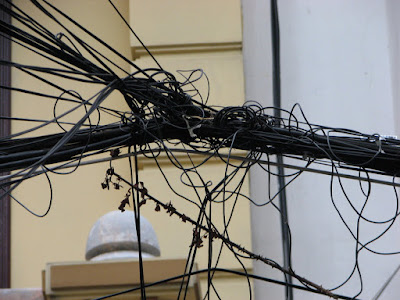 Even the bananas are better organized: 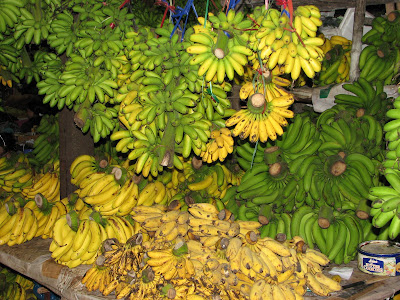 Once again we had some interesting travails on the way here.

Rusty (or was his name Squeaky?) our trusty Tuk-Tuk man picked us up on time (early in fact) at 7:15 this morning, stopped so we could grab a couple of Bao (dumplings) for the road and took us to the border. The walk through China exit proceedings went fine, and we strolled confidently into and pretty much straight out of Vietnam Immigration a couple of hundred meters done the road.

Our bags went into the first taxi we saw. They wanted $12 to Lak Son, but they settled for $5. It was raining pretty hard at this point or we might have stood our ground for $3. A moment later we were turned around at the next gate and headed back to Immigration, as it appeared that we did not get our passports stamped!

The confusion came from the 5 or 6 windows with different clerks handling all manner of bureaucratic affairs. They just kept waving us on, so we eventually were out the door thinking we were all done. It turns out that the 5th window had the papers we were supposed to fill out to take back to windows 1 through 6 (skipping 5 this time)...or something like that. I think they had a laugh at us over it, and so did we, sort of.

Meanwhile our bags disappeared and our taxi too.

The taxi did not reappear and after I shouldered my brash "pretending to be a rude American" way through a bus load of Chinese tourists who were blockading Vietnam with their suitcases, I found our bags and we were soon in another taxi for the same price, through the last gate and on to the next town.

The taxi guy took us to the Mini Bus station, where 500,000 Dong later we had our tickets to Hanoi and a friendly guide who took us to his favourite breakfast spot. It was kind of a Trucker breakfast cooked in sizzling oil in kind of a Fajita style, super hot cast iron platter at the table. Slices of beef, eggs, sausage mystery meatballs, French fries, buns, and some other stuff. Delicious and way too much! Meanwhile our bus left the station without us, and took our bags again!!

However our guide was on the phone with the driver and he picked us up on the way as we already on the Hanoi side of town...what me worry?

The bus ride was great, except for the perfumed ladies in the next row. The road was excellent, speed was about 80-100km/hr most of the way and we had the back 4 seats of the 16 seater Mercedes van to ourselves.

The scenery, especially the mountains we passed through, was amazing. Unfortunately hard to get photos but I still tried. 3 hours later we arrived in Hanoi, on the N.W. corner of the Old Quarter.

Now several hours later we have walked through many of the streets in the area and done most of the shopping we need to do here. We don't want to carry much more stuff with us so may send a few things home by mail from here.

Our trip to Halong Bay is also booked.

Enough for now, as we have a couple more days here and time to post later. Bia calls (bia=beer).
Posted by Unknown at 5:01 am