Close To The End

Not just of the trip, but also hopefully of the bureaucratic hurdles that will allow us to return home.

Today meant another early morning trip back to the Canadian Embassy to get our Emergency Passports. We then had to take our faithful tuktuk to the Cambodian Immigation office next to the PP airport. However we managed to to arrive just after the 2 hour lunch/siesta began at noon.

This did lead to a nice little side trip however and a pleasant interlude. The road we were on (Russian Federation Blvd) also happened to be the way to the home of Chhayny our driver. He offered to take us home to meet his wife and see his home, so we gladly accepted. Several kilometers out into the country past rice fields and skinny cows and a military base with gatehouses shaped like giant artillery shells we arrived.

He is a soft-spoken gentle man and so is his wife. It turned out of course that she had absolutely no English and we have no Khmer. Chhayny has a very small amount of the English needed to do his job and tries to learn more with a dictionary and a white board at home.

It was the first time he has ever brought a customer home and we were flattered. His house is owned by the company he drives for and he does not pay rent, though does pay to rent his tuktuk (about $3 per day). To the casual glance the home would look to us like a fairly deep single car garage with a bit of furniture thrown into it. It has a kitchen and WC behind a divider near the back and a double bed just ahead of that. A clothes rack hold Chhayny's shirts and a small rustic armoir holds (I expect) the rest of the family clothes.

Other than that there are one or 2 plastic chairs, an electric fan, a small TV, and a treadle sewing machine. A small motorbike leans against one wall, and near the front is a small counter holding some basic household products for sale, and a cooler box for drinks. Other than that a couple of bags of rice and 2 small Buddhist shrines complete the decor.

It was about as basic as you could make it, and all one (or 3 people) could need. The 11 year old son was away at school (7-12 and 1-5pm) so we did not get to meet him, though we know he likes to paint so hope to send him something from home.

It was a real pleasure for us to go there, but we only wish we could have had better communication.

Tomorrow we have to take another trip back to the Cambodian office to get our (final?) paperwork and retrieve the passports. After that we should be able to leave.

We bought tickets yesterday on China Air from Phnom Penh through Taipei back to Vancouver. If we had tried to retrace our original itinerary we would have to make embassy/consulate arrangements and spend more money at each country along the way, not something we have the time or energy for, and maybe not even the money. We are now thousands of dollars poorer than we should be but hopefully all of the "extra" expenses are over now. That is except for the replacement of Linda's driver license, credit cards, and the official standard passports.

Phnom Penh has grown on us a bit. Our little corner of it has been pretty good. The hotel in particular has been good, and we have a few favourite spots to eat or drink nearby. Specifically our little friend Heng looks forward to our visits to Broken Bricks and we do too, not to mention they are the most relaxed bar we have found and have the best music. They do have to throw the odd drunk and "massage girl" complete with pimp out of the joint and we still can only understand about half of what Heng's dad David says as he mumbles so low and so fast. 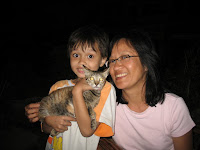 We also have really enjoyed the Khmer restaurants and the Muslim Malaysian one from last night (and maybe tonight too), and the Hope & Anchor from breakfast today.

The city is just as hectic as many others we have been in but they don't honk their horns as much as some. As in Vietnam, road markings & lanes don't mean anything (as many as will fit is the rule), and direction of traffic can be any way you want to make it too. There are many more cars and trucks here in proportion to motorcycles, made up of Honda's Toyotas Ford and Lexus, as well as some Asian only brands. We saw our first Hummer today and the other day a car that must have taken the wrong turn at Albuquerque, with California Plates! We also saw our first real taxi too.
Posted by Unknown at 2:46 am

It has been fun to catch up, after a couple weeks. I got fully wrapped up with anticipation post theft. Big bummer, but good that not all was lost re the trip.
Hello to Linda
Safe journey back.