Hué and Hoi An 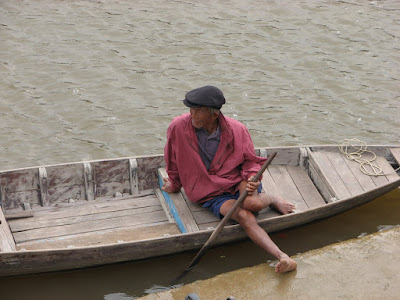 Hué and Hoi An

Hué was an overnight sleeper bus away from Ninh Binh, and a more interesting town for it's own sake. Not that Ninh Binh was bad but the character was not very distinctive and it was the scenery outside that made it memorable. I also thought that the hotel while nice enough and pretty full service, had a pretty cloyingly pushy manager. Our motorcycle guy was also maybe a bit too nice, but maybe I might just be overreacting to his demonstration of how Linda should hold onto me while on the back of the bike.

Hué has a nice setting along the River Phoung, and has kilometers of park-like grounds bordering the banks. The backpacker hotels and most nice ones too seem congregated in a small district close to the river. 2 bridges cross the river, one of which does not allow cars & trucks but takes everything else. We walked everywhere here, and strolled both sides. Most commercial stuff is south and historical sites north.

The most significant history lesson here that we know of is that this was the capital of Vietnam during 2 dynastic periods around 1000 AD. Maybe if I were not on a bus as I write this I would look that up...I might later.

There is an impressive citadel here that is 2-3 km per side, stonewalled and surrounded by a wide moat. It housed the capital of course and within it lies the Forbidden Purple City where the emperor's concubines and eunuchs could do their concubining & eunuching. Unfortunately they were not there for us this day, so we had to deal with the world's most persistent cyclo driver, who must have dogged us for a kilometer or more. "Maybe later" was his constant call, and he did not seem to get our "go phouc a duc" attitude. Linda and I are stubborn types and even if we had decided to take a cyclo we would have sought out another to spite him. 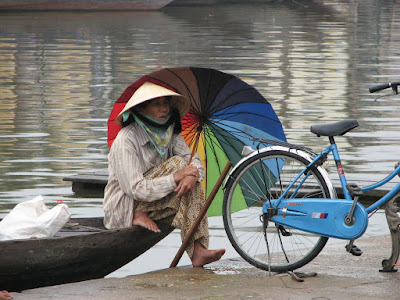 Hué is just south of the DMZ, the onetime boundary between north & south Vietnam. The bus had stopped not long before Hué, a deliberate attempt to entice us to purchase from the cafe we parked at but also to try to sell us tours to the heavily shelled, scarred & mostly barren landscape. There are tunnel complexes here but we do hope to view a similar site near Ho Chi Minh, so we took a miss.

Hué has its own DMZ, which is a bar frequented by tourists a couple of blocks from where we stayed, but we thought why go there when we could go to another called Why Not? It was also a tourist haunt, but our fast food joint we went to for lunch was not.

Supper later was a rice wrap, peanut saucey "roll your own" kind of affair we sought out on the opposite side of the river. Staffed by deaf-mutes, except for the guy trying to sell us paintings (whose attempts fell on our deaf ears), this place was worth raving about.

The restaurant, recommended but spelled wrong by Lonely Planet, was called LAC THUÂN, & occupied about 200 sq. ft. over 3 floors the middle of which was the kitchen. The stairway was about 18" wide and I clocked myself on the low concrete ceiling on the way up. It was worth every Dong, all 45 thousand and one of them, and the long walk.

Hotel touts were also very persistent here, but we headed off to where we planned the day before, the Halo in the alley at 66 Le Loi. A nice clean low-key place at $10, once again the alley gave it the quiet edge. It was steps away from our second choice, but we did not need to try it out. 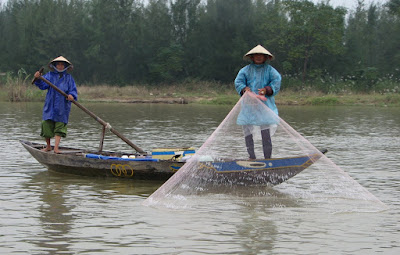 Once again we decided not to stay long in this area. Everywhere there will be things we don't have the interest or time to do, even with 4 weeks total to travel. We are more or less decided to push pretty quickly to Ho Chi Minh, though there have been concerns over the weather. There have been typhoon conditions and apparently another approaching the central and southern region so it might not be wise, but our agenda means we should get through to Cambodia fairly quickly and if there is an extra day or 2 near the end there will be options near Saigon before the flight back to Hong Kong.

The bus hop to Hoi An is a shorter one, and in the daytime. The views are very nice as we have ocean & mountain scenery. Some of the climbs put our older, slightly rickety bus to the test but it is fairly comfortable and the brakes work well enough when a small cow contingent crosses in front of us.

Another mandatory rest stop on the option provides a few more photo ops and then we climb the Marble Mountains, before descending to Da Nang. On the climb we passed through the most impressive engineering feature I have seen so far in the form of an uphill tunnel several km long. It took about 10 minutes to traverse at about 40km/hr, so do the math. Not one of those places you want to be after a fiery bus crash (Tip: if you have the option after escaping from said bus, run downhill...smoke and flame rise).

Our bus did not crash, and we soon exited and descended to Da Nang. This city appears downrite affluent, at least the main drag anyway. It was wide, clean and nicely treed, and had stores with large showrooms at least for the ubiquitous motorcycle dealers. It actually had kind of a Venice Beach feel, and had the only large sports facility (a stadium of some sort) we have seen. It also had the most overtly nationalistic sculpture so far, an unidentifiable man with an upraised arm and guns carved into the pedestal. I wanted to get a picture but the camera was not ready & we passed too quickly.

The beach was close, China Beach in fact. This area was a major R&R area for US troops during the war, and was at least partial inspiration for the surfing scene in Apocalypse Now. Surf was up as we passed many kilometers of almost white sand.

Speaking of Apocalypse Now, the night before in Hué I had a sort of half dream pre-dawn as I heard one of the diesel powered river boats thok-thok-thok its way done the river. It reminded me of the helicopters in the Charlie Don't Surf scene and all it needed was Wagner's Ride of the Valkyries.

When we got to Hoi An, we headed straight to Minh A Ancient Lodge. We had good intel on it and knew it only had 3 rooms, so were wanting to get there early. It was available and turned out to be a good choice. I don't know about "ancient", but it was old and in a style of Chinese home that was similar to what Linda's mother would have once lived in.

It was all deep dark wood, with fat columns supporting the upper floor and roof. A Buddhist shrine dominated the front room, and the rooms opened onto an open air courtyard, complete with well, stone benches, and orchids. There were no glass windows, only sliding slats, and the double doors could be locked from the inside only with a beam you dropped into the cradles on each side. We had the modern conveniences of a padlock for the outside of the door, a private bathroom down the hall & through the kitchen and an already stocked fridge in the room. The room could sleep 6, with 3 solid wood 4 poster Chinese carved beds, complete with mosquito nets (Another Tip: when offered a mosquito net, use it. Especially when you don't have windows in town as wet as Hué). 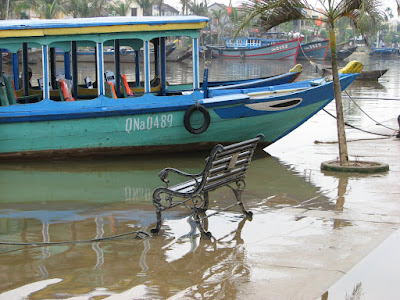 I said wet, and I meant it. Hué is right on the water, and is partially made up of islands. Remember I talked about Typhoons? A few days ago one passed through and this part of town was close to waist deep in water, and though it was not raining the day we arrived much of the place was still wet. We were only spitting distance from the river; when the tide was in it was still sloshing past the benches along the waterfront and into the first street.

The wet weather is another reason we sometimes move on, before seeing all we could. Renting a Moto (Xe Om in Vietnamese), or bikes would be conceivable in some of these smaller places but still pretty miserable in the wet. Renting other types of transport like a taxi just gets expensive. Probably the biggest reason to move on from Hué is the tourists. There are just too many of us here.

This is a very neat little town and THE place to go for many types of crafts and especially the place for custom made silk clothing (like suits). We are not suit people (maybe you've noticed?), so did not have as much to spend our money on as some. However we did spend considerably here, compared to other places. In particular other than the cooking course, a shirt and some other crafts we bought some local artists work. In this case it was original art, and though modern it was inspired by traditional themes. See below, the artist explaining his early influences: 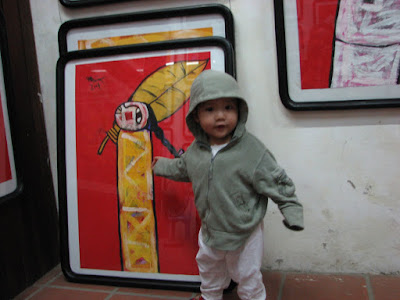