After arriving pretty late in the day with the nasty driving conditions, and no guarantee of good weather the next, we decided to take a minibus tour. It was kind of expensive at $18 each, but we had become tired of just walking about. In Dalat the sites are also fairly spread out, so it made sense. Our other alternative which might have been fun was to take a similar tour on classic motorcycles, but with sketchy weather conditions we opted for the save route, though as it turned out we need not have bothered.

Sidebar: Our "traveling companions" keep changing, but they also stay the same. The route we are taking is much the same as many other tourist backpackers, and we run into the same folks days & 100's of km later. For example Sarah & Ben from Australia we had met in Ninh Binh and later slept with...almost literally... them in the back of the bus to Hue, and then found them in the cooking course in Hoi An.

Ulf & Cora from Germany we had met at our guesthouse in Ha Noi, and then on the bus to Da Lat. They went on the minibus tour with us, and we later went for dinner with them. Other folks pop up as well, but often we don't know names, so it's the "French couple", the "Aussie guys" or the "Dutch girls".

Another Sidebar: Words in Vietnamese never have more than one syllable, so Hanoi is actually Ha Noi, Saigon is Sai Gon. The combining of them is for convenience for all us other folks. And Saigon I am using interchangeably with Ho Chi Minh City (or HCMC) as that is also normal here, and everyone does it.

When we got off the Bus in Da Lat it was at the usual kind of hotel that the tour companies use. It was only $6 per night, but looked like it too. We wandered off to find the Lonely Planet recommendation we had hoped for but it was also full so ended up in $15 & $20 rooms much further out. The wonderful and varied breakfast spread did help make up for it.

Anyway, our tour was about 14 strong in a minivan and car. The guide was pretty good at English though not terribly exciting. He took us to a variety of the local grow-ops, showing us the goods that made up much of the local economy. Da Lat, with it's altitude and milder climate has less rice and vegetables grown there but more real cash crops, much of it for export. 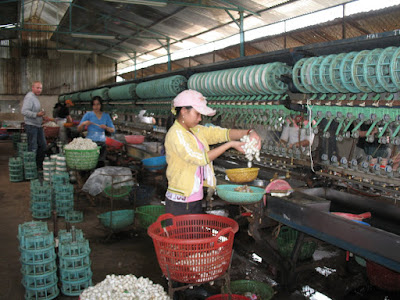 First was a flower greenhouse, then later coffee and tea plantations, mushroom growing and the site we all agreed was the most interesting, a silk operation. Here they went from silk worm cocoons right through to motorized card looms producing the raw silk fabrics and finished, patterned scarves. 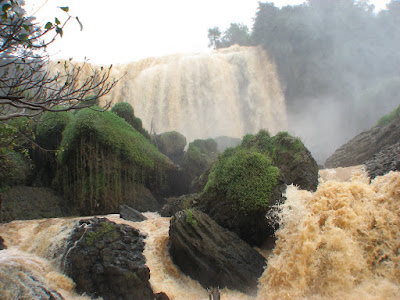 We also saw a Buddhist temple and near it one of 2 waterfalls, both beautiful things but the second waterfall was uglified somewhat by the amusement park sprung up around it. We did take some thrill of using the roller slide thing to up and down though. This was kind of like a cross between a bob sled and a roller coaster, in that it was gravity powered and we operated the brakes, but it was solidly attached to a fixed track.

We did not partake of whatever the smoking man in the bear suit had to offer though, whatever it was, and let him finish his game of chess.

A visit to a Montagnard village followed, which I found somewhat sad. They were obviously poor, as is much of Vietnam, but this was the first time it really felt like we were viewing animals at a zoo. The kids played & posed for the photos, and Linda noted that one sad looking young woman (girl?) with baby seemed to try to get in front of the camera a lot.

Sidebar again: The term Montagnards was coined by the French when they occupied Vietnam to describe any one or all of the miscellaneous ethnic minorities that occupied the highlands or "montagnes" of Central and Northern Vietnam. Hill tribes if you prefer.

Anyway there was no outright begging at least, but of course there were a lot of things for sale. There was also a chained monkey and a 20 foot chicken.

Chicken sculpture that is. Sort of like the giant Canada Goose in Wawa, or the Sturgeon in White River. I am not quite sure the inspiration behind it, but incongruous it sure was.

Da Lat is like that. Mickey Mouse and Santa Clause would be at home here, in fact this is a popular Christmas destination for the Vietnamese people. It is very kitschy, and we saw at least a few Christmas tree light type displays. There is also what looks like a 1/2 size Eiffel Tower near the lake in the center of town.

Another Sidebar: Eiffel actually designed one of the main bridges across the Red River at Ha Noi, another French connection.

The other wacky (and last) thing on the tour was the Crazy House. This place is actually a hotel, but a tourist attraction as well, for the odd ball architecture and themes. Each room is completely different from each other, and of concrete in free form abstract shapes. There are few straight lines, with stairs going off in all directions, windows and skylights at all angles. Each room has a different animal (bear, parrot, pig, etc) as a theme centerpiece.

The place is designed (and still being built and expanded) by an rich eccentric woman architect. It reminds one of what might happen if Dr Seuss met Rube Goldberg and they decided to build a house. Each room of the building has a different theme and some kind of animal critter works it's way into the design. For example a larger than life-size bear has a fireplace built into his belly in one of the rooms.

After the tour we did the shower thing (sometimes we take as many as 3 a day when it is really sticky), and walked downtown with Ulf & Cora for dinner on the lake. The locals do have some difficulty with special food requests such as "no onions", Cora discovered, but once again the food was terrific. I had some kind of cute little bunny, grilled on a stick.