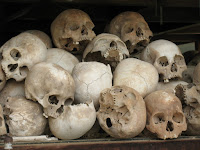 Today we did make it out to the S-21 Genocide Museum and the Killing Fields. We had to do something to brighten our mood.

I don't of course really mean that. Our losses obviously pale infinitely in comparison to those atrocities committed by Pol Pot and the Khmer Rouge. We watched the film on the life of a detainee, later executed, named Bophana. We were humbled by the experience, dismayed and angered.

Our driver today was the same fellow as yesterday. He has become our man, as he felt terrible from the experience as well. He had to witness our papers yesterday and told us today that in 2 years driving tuktuk and 10 before motorcyles for tourists it is the first time anything like this has happened to him. We talked to other drivers on the waterfront last night and they were of about the same mind I think.

However the Australian Consul employee, said "I probably shouldn't tell you this, but..." He then told us a French woman was pulled from the back of a motorcyle the day before and was then hit by a car. I don't know if she lived.

As we work this out I am getting over my anger though we are both still pretty upset. Yesterday I could have clobbered anyone on a motorcycle who came too close, and they come too close all the time in this insane traffic. I also felt like telling every driver who said "tuktuk sir?" last night to fukfuk off.

Today the driver asked me if I wanted to go shoot guns (you can fire AK47 and other classic military hardware on the outskirts of the city). Yesterday I don't think they would have had anything large enough in calibre or explosive enough, but today I told the driver "only if the guy from the moto is there to aim at", so in other words, declined.

We can get an emergency passport here but it is only good for getting out of here. If we transit through Vietnam and Hong Kong we may need to get additional documents each place which will be tricky, and we may not be able to leave the secure area of any airport we can't show enough paper for...

We can't go to Siem Reap/Angkor. Today is the 17th and our tickets from there were for the 20th back to HCMC (Saigon), but it takes 6 or more hours to get there and same to return so 2 days of daylight lost in travelling alone. We need to keep the ball moving on replacement papers and can only really get that started on Monday the 19th from here. The tickets were Vietnam Air, and they confirmed the seats yesterday, but told us we can't get a refund until a year has passed.

We had tickets on Hong Kong Air from HCMC to Hong Kong and we have yet to contact them, as those tickets are for the 23rd and we may still be ok with those. They don't have an office here but we will be checking with an agent somehow today or at least by Monday. Especially after talking with the Canadian Consul and the Vietnam officials here we will know better how to proceed. We hope we can use those tickets.

Time for a walk now, I'll be back later or tomorrow. I think I can still afford a T-Shirt or 2.
Posted by Unknown at 12:51 am