It's All About The Food, Vegetarians Need Not Apply 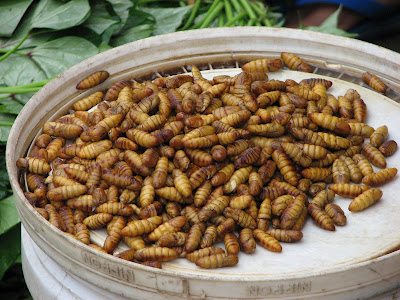 People ask us why we like to travel in places like S.E. Asia. Culture and history yes, scenery certainly, local crafts for sure, but mostly we love the food. 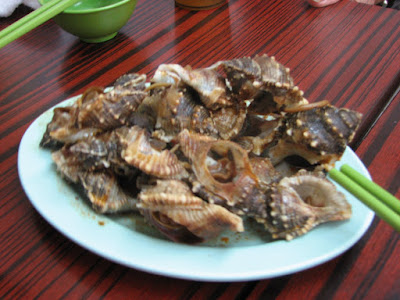 You may have seen the recurring theme in earlier posts. Today we had our first Western food of the trip and it was just as yummy as the indigenous stuff. Of course it had a French flair as could be expected in Vietnam.

Breakfast involved baguettes, croissants and coffee. Lunch was in a yuppified cafe called 2gether where we had quite fine dining with Julienned beans, Sweet & Sour Mackerel, and Peppered Prawns. It all came with delicious coffee and coconut juice with a straw direct from the nut, served on glass and bamboo tables, in white shirts and black pants with accordion music in the background and free WIFI. All of it for only 107,000 Dong or about $7 Canadian. 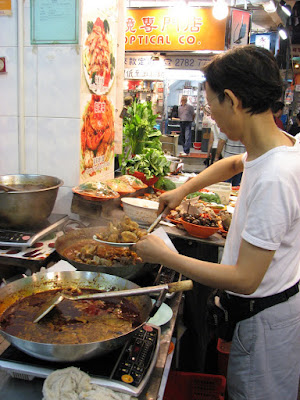 Last night was quite different, street hawker food and it only cost about $5, with beer. This involved child size plastic stools and tables on the sidewalk practically in the traffic. You put the raw or semi cooked food you wanted, all of it on skewers, on a paper plate and they seared it on a coal burning grill, and threw it down in front of you. Our selection included tofu, sweet potato, beans and corn alongside the chicken, lamb and some "other" meat products. The scraps ended up on the ground around our feet. Scraps did not come from our table as we found it finger-licking good, though finger licking around here is not generally recommended. Food-Safe? What's that? 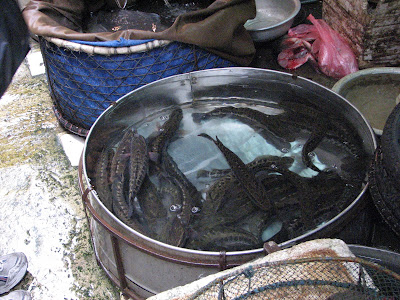 When we were almost ready to leave we took a look at a plate on another table, and wondered out loud what kind of worms or fish they were. "Penises" was the response, "oh, what kind?", "oink,oink!". There are a few things I have not tryed yet and this was one of those opting out kind of times. We soon headed back out to Hang Non or was it Dong Long Street? I felt a little more like myself once we reached Hang Manh. 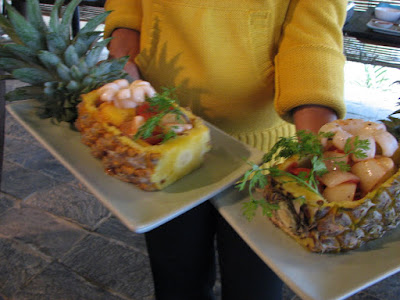 But back to today again, and it was spring rolls and noodles later on but not until after we had toured the Women's' Museum, and Hoa Lo Prison, the infamous "Hanoi Hilton".

The Women's Museum celebrated the achievements of Vietnamese women in the struggles of this country against the French and then later the Americans. Their were many poignant displays of the tools and tasks the women performed in both covert and outright military support in both of those conflicts. A display on an upper floor spoke of the success on women in the Capitalist field of business. Not as dramatic, but still somewaht interesting. Unfortunately due to renovations the display of the ethnic garb of the different tribal cultures was not open for viewing.

Hoa Lo, once the site of a small village had been a French built prison for Vietnamese dissidents where they underwent many forms of torture and often death. If not through direct means, such as by one of the guillotines on site (one is on display) they were often killed by the horrendous living conditions. Many prisoners did escape through the sewer system on at least 2 occasions.

During the Vietnam war, quite a few shot-down American pilots and crew were also detained here. The displays of course propagandized their treatment, showing a number of photos and/or describing the men as playing games or guitars and being well fed and cared for. Not likely very close to the truth, of course. The uniforms and some other effects are on display as well as pictures of Richard Nixon and B-52's over Hanoi.

Tonight on a lighter note, we checked out a night market that went on for miles, and the had a drink overlooking one of the craziest intersections around. There must have been about 100,000 bikes and motorcyles per hour not to mention pedestrians and buses doing U-turns in the middle of all of it. One thing I will say for them the people here sure do have bike handling skills!
Posted by Unknown at 1:15 am