Angkor, What A Place!

Try Google Earthing that one and see if you can see us waving from the front steps of Angkor Wat! 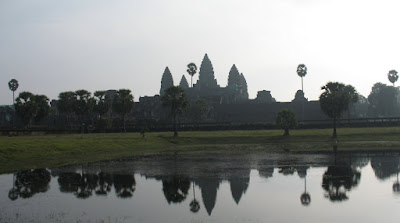 The greatest reason we wanted to visit Cambodia was to explore Angkor Wat.

For us to be stopped by the theft in Phnom Penh when so close was going to be a huge disappointment, and we finally felt we could go only after all the papers to get us home were in place. There are many buses that make the trip, you can take boats on the Tonle Sap river and lake, and you can fly from PP. We opted for the bus as it was cheapest (though my butt was not looking forward to it) and had our tickets arranged by the hotel only a couple of hours before departure. $10 each and a 6 hour trip on a big comfortable bus, with only 3 Lazy Boy size chairs per row...hardly any numbbuttness!

Cambodia's "best" highway is still not that good, but at least between towns we were able to make good time. The scenery was very nice, the verdant rice fields dotted with pineapple trees, and there were rocky outcroppings (great bouldering and single pitch aid-climbing) occasionally and many wet sections. This area of Cambodia is very flat and obviously floods at times too, as the standard for homes is to be on stilts. Except for a couple of towns and occasional small groups of homes there was little in the way of habitation along the 315 km route. When we did make the obligatory lunch stop about 2 hours in the local woman across from me on the bus bought several pineapples. I joked that there was no food in Siem Reap, and she responded that the local pineapples were particularly good, then gave me a card for the guesthouse of which she was part owner.

Again we had the hotel call ahead for a room and they arranged a place at the Golden Angkor II. It was not in the old town where we had planned for, nor mentioned in the Lonely Planet but a room guaranteed was a room. The bus stopped some distance before it but a Tuktuk driver was there with a sign waiting for us. Apparently you have to even watch those carefully, as guys will see a name on a sign and quickly scrawl the same name trying to take you elsewhere. We did not get fooled and soon were at the place, a somewhat fancy location heavily decorated in beautiful wood and just slightly gaudy glass chandeliers, and again it was our usual $20 for the better locale.

The driver wanted to be our guide too and before entering the hotel he stopped to negotiate with us for our temple visits. The usual thing there is to go before the sun is up and arrive at Angkor Wat to see sunrise over the temples. We agreed on 5 AM as a start time and $15 until the afternoon, though he said it would have to be his friend, Sup ('Sup, Dude!), who would take us. With our revised schedule we only had one full day to visit an area one could easily spend a week or more exploring.

Being out on the highway and not having a feel for the town yet we took our usual walk to find supper and not having many choices in the area ended up at another hotel. The blackened Catfish with green papaya sauce was to die for and the battered fried (kind of like tempura) vegetables were not too shabby either.

Next morning came early and we were soon on the road to Angkor, several km away to the north. We and several hundred or more friends...

The dark road was a steady stream of tuktuks, minibuses and motos, passing some impressive museums and luxurious resort hotel developments. Eventually we arrived at the entry booth, where we paid $20 each for the day. This allows access to all the temples and ruins within the area and was very high as entry fees go, but they have a lot to see here scattered over several kilometers in each direction, so we really could not complain.

Once we arrived the tuktuk parked outside the area and we walked in the dark across the 200 meter wide moat to the main entrance. Linda jumped as she saw a figure looming over her in the pitch-black entry. It was just Buddha or one of his relatives and he was basically harmless, unless he fell on you, being made of stone.

With the hundreds of others we jockeyed for a good position to see the sun rise behind the main temple of Angkor. This area is considered to be the largest religious monument in the world, and so far all we could tell is that it was BIG.

In fact I think the sunrise was no big deal, though the early morning light after was the best time for picture-taking as the bright flat tropical lighting to follow the remainder of the day does wash out the the interesting details in photos. I did try for a couple of longer exposure shots to get some approximation of the effect, but was not greatly happy with the results. My camera (Canon S3 IS) crapped out several days earlier on the boat from Vietnam, and the A620 that Linda was carrying was now our only apparatus and we had no tripod. 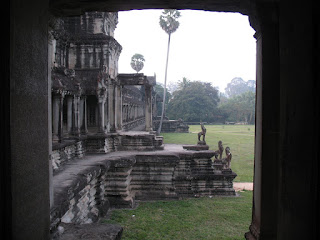 The temples must also be suffering under the weight of the gazillions of pixels of photos taken there. The crowds at least thinned out as the day progressed but in the early morning it was hard to get a shot of anything without a white face in it. Later the faces were not quite as white when we started running into the Asian tour groups. 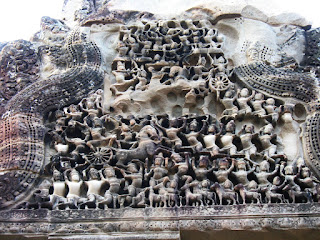 Nevertheless the place was amazing and we wandered much of the grounds which measure about 1.5km by 1.3 including the moat. The central palace itself is over 330 meters by 250+ meters, and is heavily decorated with friezes and other sculptures. The condition varies, as there has been much erosion and degradation from the jungle encroachment. Restoration work has been under way for quite some time, though it was subject to a large gap due to the Khmer Rouge and the ramifications of their terrible reign. The French, once colonial masters here, have been helping to make some reparations as well as other countries. 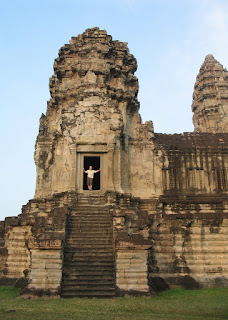 This site was built in the 12th century to honour Vishnu by King Suryavraman II (Survivorman?) and a few hundred thousand of his slaves. What is now vacant grassland occupying most of the compound was once grass and wooden buildings as this also was a city. We explored for at least a couple of hours, before walking back across the causeway to find our driver catching some ZZZ's.

After a few hours we traveled a short distance to Angkor Thom. This area is the largest of the ancient Khmer cities and is a walled area several times the size of Angkor Wat. It includes within it's walls a large number of temples and structures, some of which are of unknown purpose. Occupied from the 12th century until perhaps the 17th, some of the components date from as early as the 9th century. 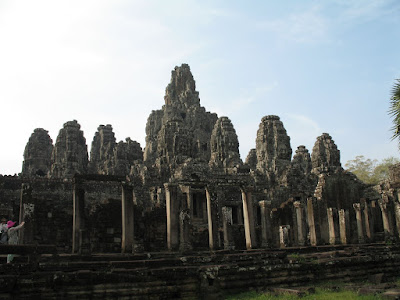 Once through the South Gate we soon arrived at the riotous mass of stone known as the Bayon. This complex arrangement of towers and chambers is most notable for the faces in the rock, as they are everywhere and pointing in many directions on the dozens of towers. 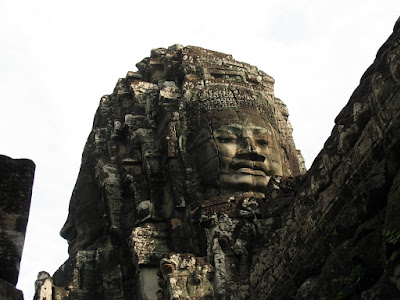 We explored quite a number of other towers and structures before lunch, fended off the most irritating souvenir vendors yet while eating, and then went to one other area before returning to town in the mid afternoon. 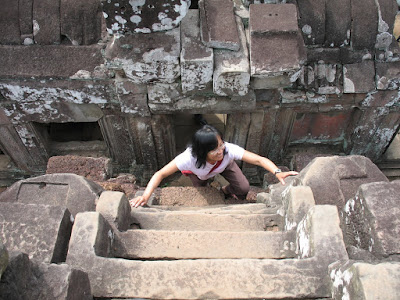 The last area we visited that day at Angkor was called Preah Khan. Another spot we had wanted to visit was not accessible due to bridge problems after the long rainy season, and it's main attraction was the fact that much of it is still jungle covered. Preah Khan, probably once a Buddhist University housing about 1000 monks has some of the same characteristics. 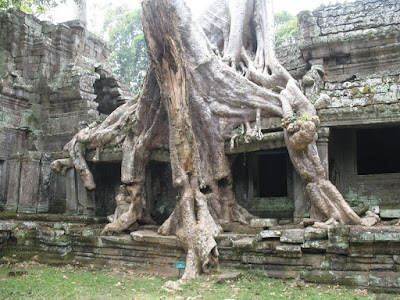 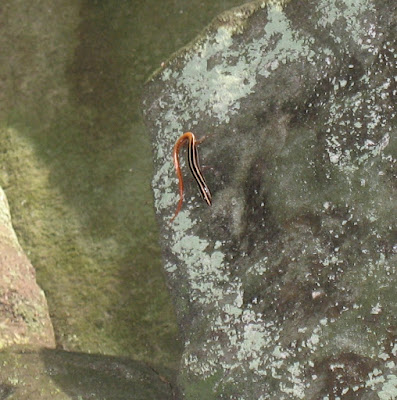 While there we came across a very strange insect (I think it was an insect! or maybe a reptile???), with the permanently curved tail, and when leaving the area we initially took the wrong way out and found 2 boys harassing a snake in the underbrush with their slingshots. I could not get a good shot of the snake (Understandably I did not want to get too close!), but it was actually screeching at us, a sound very bird-like and not something I expected from a snake. In their rudimentary English they said it was some kind of Boa, but that may just have been their word for "world's most poisonous snake" so I stayed pretty well back, though not as far as Linda liked.

We headed back to town after the snake refused to come out and play, and would have gone to the Cambodian Land Mine Museum on the way back to town, but it has recently moved much further away than our Lonely Planet Guide told us, so could not be on our agenda this time. Our shortened time here (2 days shorter than planned) meant we had not enough time to visit all the temple areas we would have liked either, but we think we did get a good sampling of the region in the 5 AM to 2 PM time we did have. For that day at least we did get somewhat "templed-out" after 6 or 7 hours and wanted to see some of the town too in the remaining daylight.

After getting back to town we walked into the old part of the city to check it out. The river we followed was crowded with boats practicing for the races to come on the weekend, not to mention lots of spectators on the banks.

The bulk of the Lonely Planet suggested restaurants and guesthouses are in the old area, as is the more interesting mid century French architecture, about 2 km or so from where we stayed. The old market we explored where Linda found a shirt for herself and we found a nice bakery where we bought muffins for the early morning bus trip back to Phnom Penh.

Having a restaurant called Amok in mind led us on a bit of a search, and we eventually found it in an alley. I don't know who runs Amok (sorry, couldn't resist), but they charge at least twice the prices we had become used to paying so we kept on going to the Khmer Kitchen where I am sure the food was nearly as good though the tablecloths may not have been as clean. Main dishes about $2-3...

Amok (http://en.wikipedia.org/wiki/Cuisine_of_Cambodia) is sometimes called the national dish of Cambodia and features a type of catfish in a coconut curry-like sauce, and is very yummy! 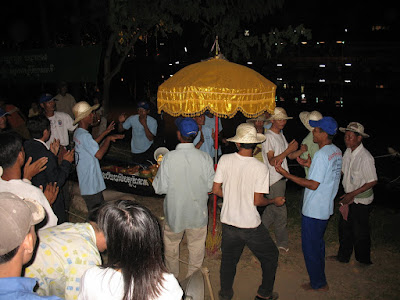 After dinner we strolled back to the hotel along the rivers other side, stopping to check out some of the boats on banks and absorb some of the party atmosphere of the teams and their fans, but after our early morning it became another early night for us.
Posted by Unknown at 6:21 pm