Cooking in Hoi An and Bus Trips

Hoi An was a very neat little town, except for all the tourists. I guess we are part of the problem.

It is apparently THE place to go if you want a silk suit (or anything) made, having about 200 tailoring shops. I had a shirt made, not being of the suit type. It was ready the next morning and $10 later.

The place is full of souvenir shops and the usual crap. I bought a NORTH FAKE fanny pack camera bag, for $5. It might last the duration of the trip.

There are however some ethical shops making crafts and selling them to support causes such as the the WWF (not the wrestlers; the World Wildlife Fund), for example there are several threatened monkey and Langour species and some Montjacs (which is a deer like beast) they specifically speak of here.

We spent some time and money in a shop which is staffed by handicapped young people, and I had a pleasant conversation with one young man who lives in the country nearby and rides a 3 wheeled scooter to work as he has crippled legs. I wish I could remember his name. 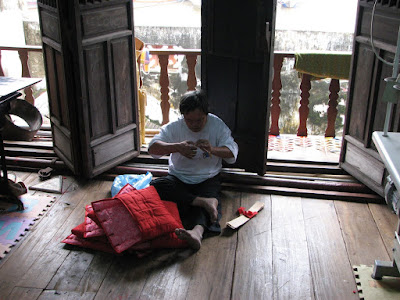 Another definite highlight here was the cooking course I mentioned before. It involved a tour of the local market being introduced to the local produce and varieties of seafood etc. The old ladies chewing on betel leaves were pointed out with their characteristic purple lips from the mild stimulant. A 20 minute boat ride up the river to a beautiful resort like setting followed. Here they grow many of the herbs, though I think as much for demonstration purposes.

After that we were sat down in a grass hut with a cooking table set up for the chef, complete with angled mirrors for better viewing. There were cooking stations for all 20 or so of us as well. Lectures, demonstrations and hands-on stuff followed and I think Linda and I did alright! At least we did better than the German and Aussie guys there, which I hope is no great surprise! 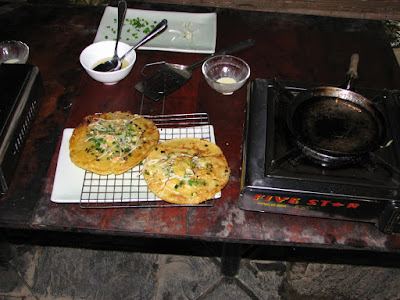 After we cooked what we had eaten plus some other dishes there was not time for us to make. We had our own spring rolls (we even made the rice paper wrap) and saute squid salad in a pineapple and eggplant in a clay pot for example.

The setting and surroundings were exquisite, and it was all lead by a Jamie Oliver wannabe, Vietnam style. He even had the accent (though a bit Aussie tinged, which he said came with the T-shirt) and the jokes.

Back up the river later we had delicate French pastries and then bought some original modern paintings from some young Vietnamese artists.

Despite all the neat stuff here, we were glad to get out as it was just too crowded by westerners. They may have outnumbered the locals.

The next morning we set out on another bus for Dalat, passing through Nha Trang on the way. I already mentioned the torrential rains, but I will again!

The rain was so hard and the flooding over the road so bad, that we had to stop at one point and take all the packs from underneath and chuck them through the back window and fill the back row of the bus with them. Being near the front of the I was commandeered or was volunteered into doing the chucking. Linda's pack was one of the wet ones, mine not so bad.
Posted by Unknown at 4:40 pm