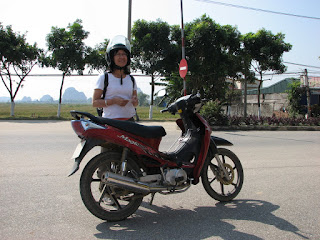 Well I would not say I quite drove like a local really, but I tried.

We took the bus to Ninh Binh last night and were dropped off on the highway about 2 km past our hotel, of which we were barely aware of the name. We walked in what we hoped was the right direction, asked some cops, and then about half way along 2 motorcycles pulled over and one guy said "are you the white guy we are looking for?". Well, that's not exactly what he said, but I was the only white guy in sight...

Anyway they were looking for us and soon had us at our hotel. Supposedly we had booked a $10 room but ended up with one for $15. nnyah...who cares? The place is quite nice, restaurant inside, menus in Vietnamese, English, French and German and even a Norwegian guy working here. Very helpful, but maybe a bit pushier than some we have found. Not really annoyingly, so it is tolerable.

To see the sights here we rented a motorcycle (a Taiwanese SYM 110cc was pretty much the standard issue, if not a similarly sized Honda), for $7 for the day. Never having driven one before, at least not one with foot shifting (scooters only), it was a bit tricky. I am also used to making bikes go with my feet not my right hand, so I have tendency to not let go of the throttle when I should! Linda never fell off the back, or front or either side for that matter so it all worked out ok.

We probably did about 50km, some on the highway (not intentionally) but mostly on back roads and narrow paths and dirt roads. We traveled to Tam Coc, and took a foot rowed boat for an hour along a slow moving river through the monumental limestone hills, including through 3 caves. A very touristy thing, sometimes referred to as "Halong Of The Rice Paddies", but it was still stunningly beautiful. 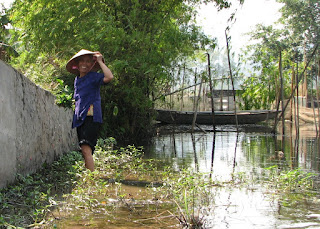 We were early enough in the day that there were more tourists (read Tour Buses) around when we were on our return trip than on the way out, and we were not hounded too much by the soft drink and souvenir vendors. Many of them were in other boats but they mostly ignored us. We had 2 rowers, one using her feet with 2 oars while the other had a single paddle. We seemed to be the slowest boat on the river, maybe because they chattered constantly to each other and to every boat we passed. 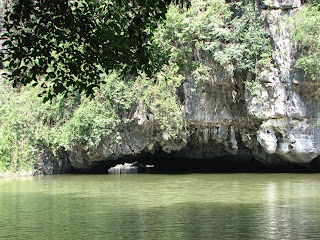 We also resisted our rowers attempts to sell us embroidery, which they had in a covered box on board. However even though we planned to give them a tip when we reached the end of the trip anyway, they asked for it before we docked. They probably don't want to be seen asking as this might not go over well if other tourists see it happening before they get on board. A dollar each was all we felt necessary, though they pressed for $1 from each for each. A simple "no" stopped that. 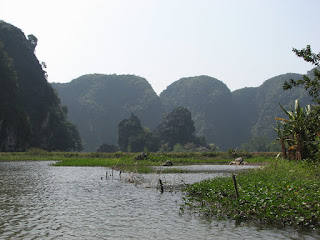 In general tipping is not done here, but we have done so sparingly. Our tour guides in Halong we gave a small amount to, and maybe only one other time. The tour guides are paid the equivalent of about $7 per day, so an occasional extra $1 is fairly significant, and we felt they worked for it. We prefer to reward hard work, extra service and genuine helpfulness and we felt we did get that in Halong. "Power" (we forget his real Viet name), our guide the second day, was especially good so he got a reward. He was also less annoying and cliche then Hien our day 1 guide.

Anyway, after the boat ride and lunch we starting backroading on the moto. We passed though a couple of tiny villages, weaving through the chickens, cows and "dinner dogs" on the roads. We saw very few cars for quite awhile, and more ramshackle tractors, bikes and pedestrians than anything else. Many people, especially kids, waved or smiled "hello". Rice paddies, water buffaloes and goats were on both sides, and the whole area was surrounded in the distance by the beehive shaped karst mountains.

At the end of one of the tracks was Bich Dong, a Buddhist temple on the cliff side with shrines in a cave above. As we admired the sights we were clapped at to get our attention by a small man above us on the hill, and soon walked up to greet him. He turned out to be deaf and dumb, though could make some sounds. He wanted to guide us up the cliff to the top for the stupendous views, or at least that is what his signing and gestures indicated.

We started up with him , but Linda was winded soon and ended up waiting at one of the shrines along the way. I continued along with the agile man and after about 15 minutes of sometimes precarious scrambling we finally clawed up onto the peak. He was right about the view; it WAS beautiful and we took a lot of photos from there, including several he took of me. The paddies and villages lay far below and it was one of those places you could go back to again and again, or I suppose you could likely climb most of the other rocky outcroppings. Of course he chose to have a smoke at the top, while I was sweating like a Canadian. 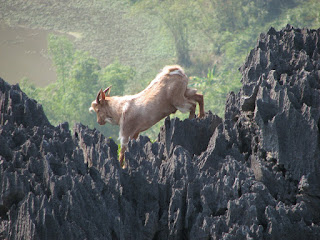 On the way back down we saw goats on the next peak over, and he tossed a few rocks to get them into "action poses". However Linda waited so we soon ended up down at her level.


Following the back roads for quite a bit longer we stopped for pagoda breaks, goat breaks, water buffalo breaks, lily breaks and rice paddy breaks. Eventually having to turn back however, we ending up on the highway one more and another turn at Vietnamese traffic jamming and actually I did not do too bad! It really is quite remarkable how the roads rules work around here. Beeping to let people know you are coming, no shoulder checking, almost no signaling, almost no regard for one way streets and traffic lights, and merging wherever and when ever you will fit. 2 Lanes? Nope, once again as many as will fit!

All in all a great day, and now finally my tan is really starting to kick into gear!
Posted by Unknown at 1:35 am