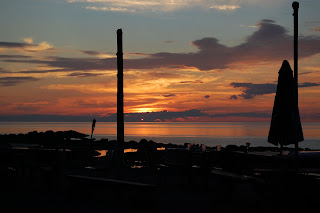 I have lived in Quebec, specifically Montreal for a year and Val D'Or a few months, and travelled through it several times including by bike. I had not been to the Gaspé peninsula other than to cross it from New Brunswick. So, it was with some anticipation that we headed that way from Quebec city.

The most convenient route is by the south shore of the St Lawrence, though you can travel the north side, but eventually need to cross the river or Gulf if you get that far, by ferry. Time would not allow that option really though I am sure it would be highly enjoyable that way. 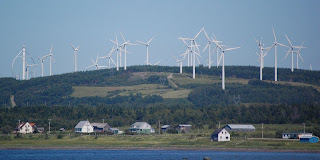 On the way to our day's destination we passed by Cap Chat (Cape Cat?) where there is one of tbe largest wind powered generation sites in North America, and the highest vertical axis wind turbine anywhere. Very cool, but we could not stay long enough for the complete tour. 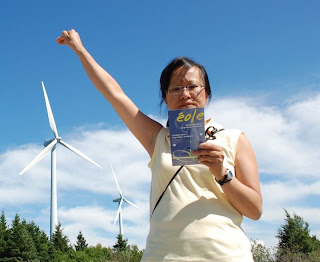 We traveled as far as Saint Anne Des Monts (about 500km), about half way along the north side of the peninsula to http://www.aubergefestive.com/ a hostel right on the water, where we camped on the beach for 2 nights. This was more or less the way our trip went, a day of significant travel of 300-400 km or more follwed by 2 days in roughly the same spot.

2 days was enough for us at this Hostel. Nice spot, shame about the slackers! Not that there was anything worng really but it was very much a beach hangout pad for many folks there, and mostly oriented around the party scene. In fact the first night the music at the outside cabana style bar went pretty late, and the next night they had a band that was not all that good.

We were probably actually lucky that we did bring our tent and placed it on the beach where we did, as we were a bit away from the general noise and behind the direction the PA system was directed. High tide about 2 in the morning meant that the drunks walking on the beach did not have lots of room between the water and us in our almost camouflage-colour tent against the rocks, so we think they almost stumbled on us a few times.

It actually really was not that bad and we did mostly enjoy it there. The hostel was definitely rustic with varying accomodation options, such as a lodge, a Yurt and a Tipi, and our beach camping which was the lowest price option and likely the most private. 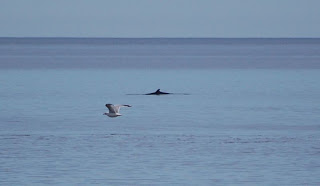 The setting was very nice with a 180 degree or better view of the Gulf of St lawrence, and spectacular sunsets, whales languishing by, a very laidback feel during the day. It was a few km past the town of Ste Anne des Monts but convenient to get to the Chic Chocs, the highest mountains in Southern Quebec. We managed to hit both of those on the full day we had there, for 2 neat experiences.

In the morning of our full day there we headed up the road into the Chic-Chocs in Parc de la Gaspesie for a moderate 5 km hike at Mount Ernest Laforce and side trip to a nice waterfall. Not far from us we could still see some snow in the surrounding peaks, but the weather could not have been nicer and the mountain scenery, even to a BC transplant, was pretty outstanding. 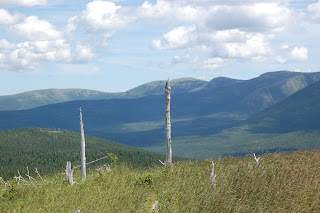 After coming back down from the hills, we headed off to get a feel for the town, which turned out to be a good choice for the apres-midi. Gravitating toward the Quay in the middle of town (just look for the biggest church, it won't be far from there in any town in Quebec), we found what was probably where half the small community spent the weekend. The popular sport there...Mackarel fishing! 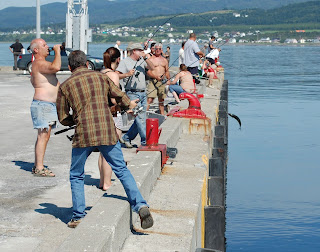 People of all ages and sizes (bellies) lined the concrete dock, and just hauled them in, with perfect casting technique and coloured unbaited lures. Some of them had a strike every couple of minutes, and many of them just gave them away. A couple of guys just yelled "Madame!" every time they landed one and a "madame" appeared and grabbed the still gasping foot long fish and threw it in a bag in their car.

Quite entertaining...and Linda befriended one fellow who had retired here from Montreal (and spoke passable English, good for Linda), and was gracious enough to give 2 of his catch as they came off the hook. That was our cue to leave, as we preferred to cook our fish on the barbeque back at the hostel on the beach and not in a plastic bag in the back of the car. 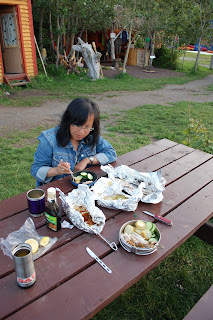 The Swiss Army knife came out back at the campsite, and we soon had the fish cleaned and prepped for the barbie with some veggies and a bouteille de vin for dinner. We had enough fish to give some away to a fellow camper, but could easily have eaten it all it was so good!

A Katimavik group from Rimouski showed up at the hostel as well, and while we were cooking our dinner we ended up helping one of them to cook the meal for their entire group. Basically he had trouble boiling water...

They turned out to be quite easy to make friends with and of course I did the Katimavik project back in the 3rd year of the program (1979-80), so had some empathy for them. One of the shyest-seeming of the group asked me in broken English, if I did not mind taking them to the nearest store (never that far in Quebec, but still several km away) where they could buy some beer. Again empathy helped so of course I said yes, and was told I would make a good group leader because of it!

Our trip had to continue though and the next day we had to get on the road to the town of Percé... and a quiet B&B awaiting us there, but not before some of the spectacular scenery of Parc Forillon. 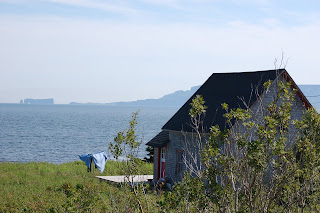