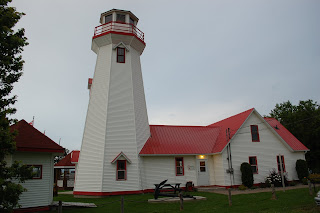 Driving from Percé to Cambellton takes a few hours as it is about 250km on what are mostly 80km roads but in a torrential downpour could be a lot longer. That's how it was for at least part of the day, but the good thing was it was not that whole time.

Crossing to New Brunswick over the bridge at Pointe-A-La-Croix to what is virtually downtown Campbellton (it ain't a big town) was quicker tham I thought actually. It also could not have been easier finding our rooms for the night.

It being in a Lighthouse helped.

Hint 1: Lighthouses are usually near water.

Hint 2: They are usually tall.

Hint 3: Hmm... they are usually painted white and/or red?

Hint 4: They have a big light at the top?

Ok, so our destination did not have the big light turned on, but since it was not dark and we could see it from a few km away as we started across the bridge from Quebec, we could not easily miss it.

We had called ahead from Percé to reserve a bed or 2 at the Hostel in Cambellton, not expecting a big place. It turned out to be no problem. The only accomodation style there was dormitory, but Linda ended up with a semi-private room and I had an 8 or 10 bed room to myself! That's right, aside from one staff person and one other woman there was nobody else staying there, and she might as well not have been there at all, as Linda barely saw her lift her head from her laptop computer using the free wifi.

The place was exceptionally clean, had a good kitchen we could use, as mentioned was super easy to find, and was just a block or 2 from the Tim Horton's equipped town center. What more could you ask for?

A nearby bar I suppose. I expect there was one, but since we had brought a bottle of wine with us from Quebec that hardly mattered either, and it went down well with our meal we prepared there.

Lighthouses are not always white and red. Sometimes some Blue is thrown in and maybe some other colours like yellow or gold. In fact further dowen the Acadian coast of NB, we found the one below: 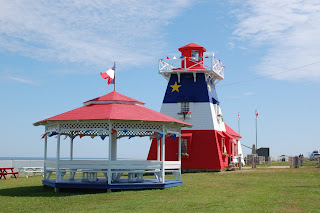 I really like the Acadian flag, and so do les Acadiens. They fly it everywhere and when they do, they fly many of them not just one. Flag painted lawn ornaments, chairs, flag painted houses even.
Posted by Unknown at 4:41 pm