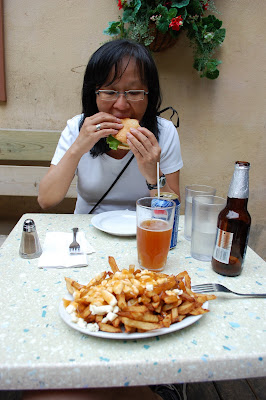 Our trip went off without a hitch from Vancouver.

We began with our flight to Montreal, picking up our rental car in Dorval, and immediately into the thick of traffic on routes 20 and 15 (Decarie Blvd). Linda and I headed off to the Atwater Market for breakfast and then our acommodations, dropping our stuff at the Hostelling International location near the core of the downtown a few blocks off Ste. Catherine. This was near my old stomping grounds, and though that does go back a lot of years it was still familiar.

I love the architecture in Montreal. Surprises turn up everywhere, as can be seen in these canine gargoyles: 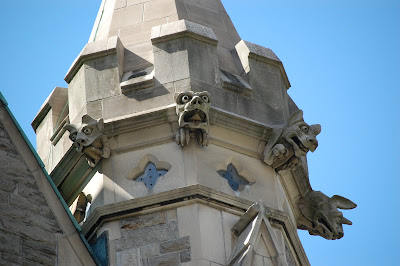 Our 2 day Montreal excursion included the requisite stops in Old Montreal, Dunns for Cheesecake, St Viateur for bagels and Schwartz's for smoked meat. We also managed to fit in some Poutine at La Banquise , a bit of shopping in the underground downtown core, for some culture a pipe organ concert at St James United Church on Ste. Catherine, Chinatown, some of the Juste Pour Rire (Just For Laughs) festival on St Denis... and a bunch of other stuff! 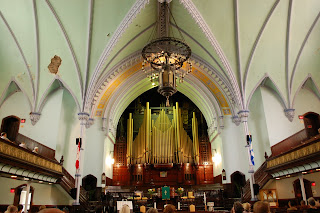 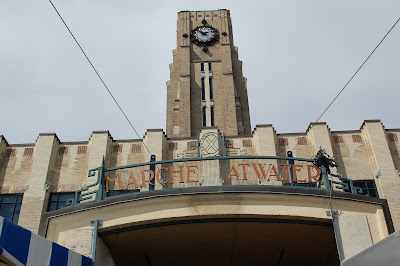 We found out the Montreal Police are using a new Segway-like-but-3-wheeled-scooter to get around some of the pedestrian friendly areas like Rue Prince Arthur. I asked the guy where he kept the shotgun but he did not have the gunrack mounted yet. We also heard a funny interchange between the cop and a woman on a bike who insisted she only rode her bike here because she could not read the French signs. 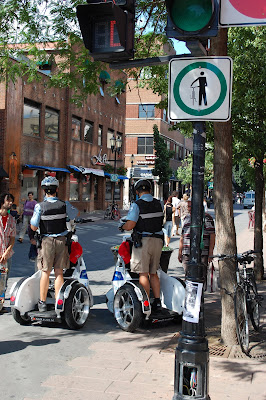 We travelled to Quebec City on Highway 40 on the north shore of the St Lawrence after picking up some fuel for our Primus stove at the MEC store in Montreal. I can see why people complain about the store location, as it is in a very un-bike-friendly area of big box stores on the wrong side of an intersection of 2 major highways. A beautifully well done store but a bit hellish to get to.

Quebec was busy with tourists, more noticeably than Montreal, as they tend to congregate in the old city and this being the 400th anniversary of Quebecitation there were many visitors. Despite the numbers it did not seem as busy as I thought it could get, and fewer of them seemed to be Anglophones than I expected. For example we dined at a Moroccan restaurant called Casablanca (what else?), that deserved to be busier than it was. It was down a narrow alley and we tend to like those "down a narrow alley" kind of places and maybe others don't. I'm kind of glad they don't as we like restaurants that are unique but not crowded and serve good food that is not of the standard burgers and fries mentality that accidental tourists seem to prefer. Why go away, if what you want is the same old same old?

The weather turned a bit while we were there and produced some of those thunderstorms I really like, and that we seldom get on the west coast. In fact as we were walking along the boardwalk between the Chateau and the Citadel the hair on my arms and head stood up a fraction of a second before the first lightning bolt we saw. It was followed very few seconds later by loud thunder and was obviously very close. The storm thankfully did not produce much rain but went on for hours! It also produced some spectacular lighting like that in the image below: 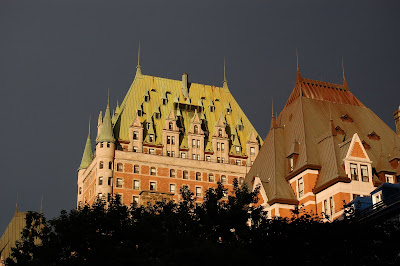