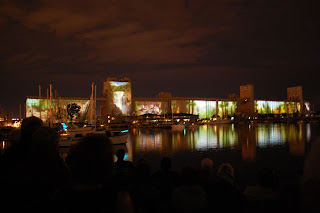 While in Quebec we were treated to something so impressive in the way of a multimedia presentation that I feel it deserves it's own post.

Robert Lepage, the highly renowned artist, director and visual media artist created a massive show describing the history of Quebec from before the original European settlers right up to the present day. This is showing between late June and late August, every night for free, on what becomes the world's largest screen, a 600 meter long set of grain elevators in the port of Quebec.

We tried to watch the show from the road surrounding the upper city on our first night there, but the lightning storm that night prevented this as the show had to be cancelled, I presume due to potential danger from lightning strikes. Our seats were on a cannon in a tiny park amidst a group of other tourists, where we considered sitting UNDER the cannon as it spat with rain. 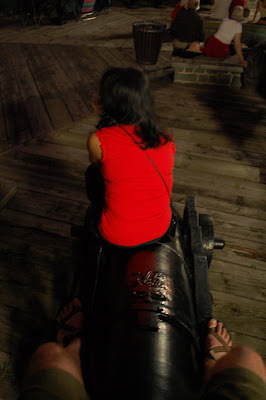 We were disappointed that first evening, but our host Gilbert insisted it was well worth another attempt the next, our final night in the city. He had already seen the show 4 times and said he would take us to where he felt we would get the best combination of views and sound. This proved to be right on the shores of Bassin Louise, and again the weather threatened but the show did take place on schedule and was completely enjoyable. 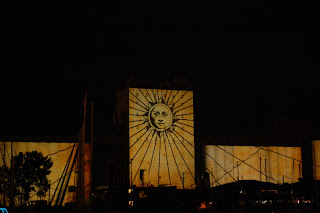 As large as the show's images were, it was dark and we were far away, so my pictures may not be as sharp as I would like, but I hope you get some sort of idea of how impressive it was. (Please click on any of them to see them in a larger size.) I of course had to use a slow shutter speed and a very high ISO setting but the images were also changing frequently, often "morphing" from one to another or rapidly moving across the concrete "screens" so were difficult to capture. The image below was about 30 meters high; the below pictures of cigarettes (the tobacco industry has been a big thing in Quebec) and the piano keyboard (Jazz also important here) are at least a couple of hundred meters wide! 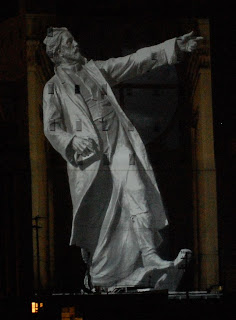 Everything from whales and sailing ships to the historical figures and important industrial achievements, medical advancments and cultural diversity of Quebec was featured. It reinforced and reminded me of many of the history lessons I had mostly moved to the back of my memory.

Of course it was not all pretty images. From wars to bridge collapses to revolutions, Quiet and not so quiet, it was here in the 45 minute show. 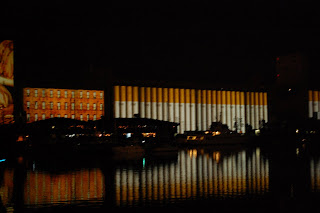 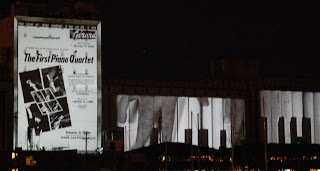 Even without words or prior knowledge anyone could have learned a good deal of the history of Quebec from this show. I thought one part seemed to be just slightly commercial, and that was a fairly significant homage to the paint company SICO (from Longueuil, south of Montreal) and..who knows?...maybe they sponsored the show? It seemed to be the only obvious commercial influence except I suppose the tobacco companies, but even then there was not an obvious name like Imperial superimposed on the images, nor did they last as long. 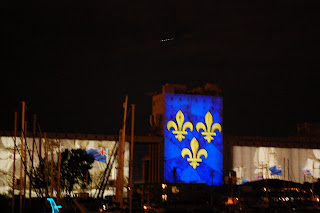 No worries. Someone has to pay for this, and other than taxes which I don't pay in Quebec, a bit of subtle advertising might have helped and did not hurt the show. And heck, I am more picky than some on this topic. In any case, well done and Bravo Robert!
Posted by Unknown at 9:39 pm

Wonderful description of the event.

Lepage did create something that, with the silos and 'morphing,' very few in the media have been able to descibe with as much feeling as you have put here...

Thanks for the nice feedback. I thoroughly enjoyed it, and would have watched it again if we had the opportunity.