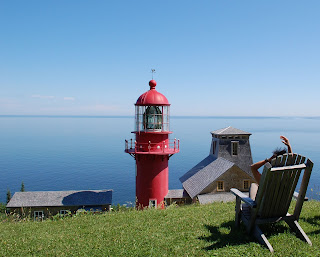 Travelling on to Percé the next day was about a 350km day, maybe more with some side excursions in and around Parc Forillon. Actualy before the park we took a side jaunt down a dirt road and found a beautiful site with lighthouse that was once a Marconi radio station for some of the first trans-Atlantic radio communication, established in 1904. Called Pointe-à-la-Renommée, it is well worth the several km detour.

The Park Forillon is on the most northeastern corner of the peninsula and has some dramatic cliffs and escarpments. We had considered camping here but had instead reserved a real bed in Perce, which probably turned out to be a good choice as we would find out he next morning.

The southern section of Forillon around Cap-Aux-Os had southerly views across Gaspe Bay. Again I saw whales here but quite distant and fleetingly. Actually I did not "see" whales, but saw some spouting. This would indicate a different species than at Ste Anne Des Monts, possibly Grey whales not Minke. We later passed through the town of Gaspe itself, stopping off for some fried chicken at lunch.

Past Gaspe and in the neighbourhood of Barachois we passed high hills and long inlets, very fjord-like topography. I expect the hiking would have been outstanding, not to mention the hang-gliding.

We eventually descended from the inland side high above into Perce. It turns out that the town is quite touristy, more so than any other place we had seen in the last few days. In fact it reminded me of many areas like Shediac and Lunenburg. Quaint but over-run by tourists and businesses catering to them.

The main attractions here are of course whale-watching, the Rocher-Percé and L'île Bonaventure. It being late afternoon when we arrived, other than wandering around town and finding our B&B and a local style meal we left these things until morning.

The morning however started out nasty with hours of heavy rain and lightning. Thankfully as alluded to above we did not have to deal with camping in this mess, and were almost to be disappointed in our tourist activities too. The skies started to brighten by about 9am though so we went to check out the tour options a few blocks from the house where we had spent the night.

This being a touristy town and obviously catering to English speakers a lot, I decided to test the fellow at the most convenient tour vendor. He explained that since the weather was improving the tours were starting to run out to the Rocher-Percé and Bonaventure (we did not want to go whale watching).

The only problem he said was that because of the "Schmud" there was only one trail open on Bonaventure.

Schmud?? At this point I switched to French to make it easier for him, and figured out that he actually meant MUD! 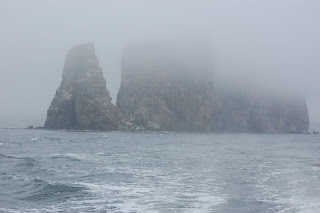 Tickets bought we headed out at 10am or so to on the tour boat, one that could hold about 40 people but this trip maybe had 15 on it. Despite the still misty coolish weather it was well worth the trip. 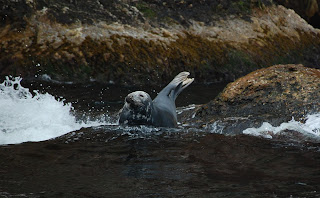 After touring around the Rocher-Percé for a bit we crossed the 2 or 3 km open water to reach Bonaventure, circumnavigated it and landed on the inland side. 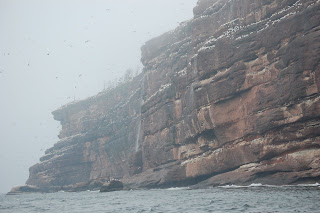 One of the main attractions on this island is the huge colony of Northern Gannets, though there are many other seabirds here. The Gannet colony is estimated to be in the neighbourhood of 120,000 pairs! That's a lot of guano, as we could smell even before we landed on the island. 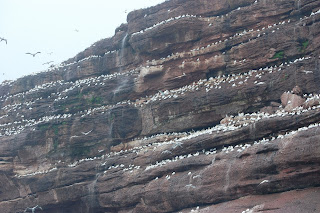 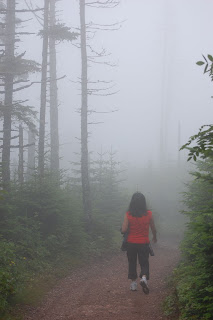 The cliffs were covered in the birds, and after we landed we headed up the only trail that was open due to the schmud. This lead across the island to the nesting place of the bulk of the bird colony. Schmud there was in quantity, but it was not that abnd took about 45 minutes to cross the island. 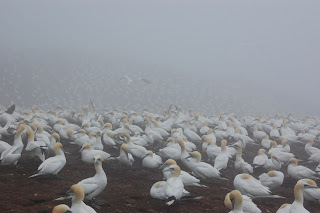 These birds are about seagull size, but a bit more attractive with very intense eyes, and some blue yellow and black colouration. They have quite a few interesting beak-stroking and head-shaking movements, and while they seem to co-exist well in the crowd it sometimes get territorial. In the fog we probably saw only small fractions of the entire crowd, but it was pretty impressive. 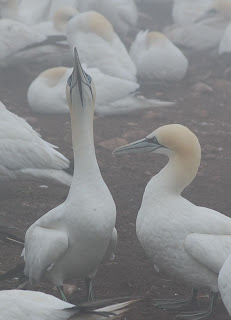