Bagan and the Irrawaddy 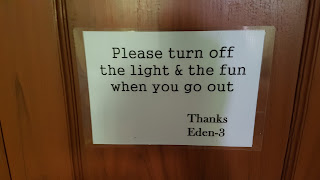 Our second day in Bagan was pretty low key. We had explored a lot with the E-bike on the first day and my GI is giving me some trouble so didn't want to stray too far. I imagine I picked some little intestinal friends from something we ate or drank in Yangon.

The first night we walked quite a way though the busy dirty main road on Nyaung U to find a place that came well recommended called Weatherspoons. It was on a street that lots of restaurants, most seeming a bit higher class than elsewhere in town. Weatherspoons was full, and virtually everyone was a westerner. That was a first for us on this trip. 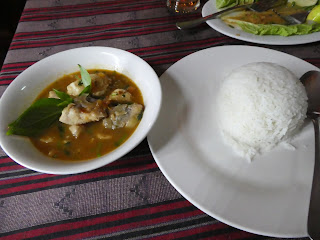 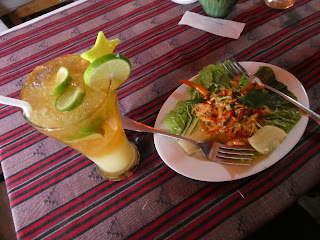 An obvious reason appeared to be a meniu that included hamburgers, fries and pizza. However, while it wasn't bad, it wasn't that great either. We had a ginger salad and a Burmese fish curry which was heavily over salted. The Myanmar Mule was pretty good though 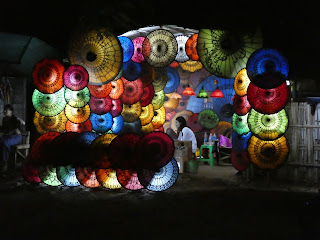 Next day we lazed around, but eventually went to the local market. Linda got some $3 pyjama pants (altered on the spot) and bangles and I picked up a couple of elephants. Small wood carved ones, that is.

Later we grabbed another E-bike (5000 kyat per day, about $5) and went for a short ride. No temples, just toodled about enjoying the breeze and also found the spot where the boat leaves for Mandalay. We didn't want to have to guess where it was as we were going to be walking there at 4:30am. 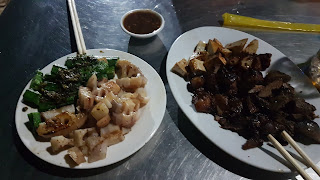 For a small lunch and last nights supper we went back to the restaurant street as it just appeared cleaner. With my gut issues I actually had a small simple pizza at one place. Not special at all but ok. I had a lassi with it; maybe some good bacteria from the yoghurt might help. Supper was grilled meaty things, okra, tofu and lotus. Not bad at all but I kind of picked at it. 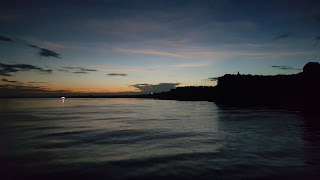 Next morning came early. Thankfully the overnight torrential rain had stopped but it was mucky and dripping for our 25 minute walk though nearly deserted streets.

Today is a do nothing kind of day as the boat to Mandalay takes at least 10 or 12 hours. It's reasonably comfortable with reclining seats, some deck chairs, a dining room. It seems to have a capacity if about 100 or so and is not even half full. Some French, a large group of young Germans on a tour (rolling suitcases and everything)and the first Canadians we have met, a slightly older couple from Quebec.

The Irrawaddy River is one of the great rivers of Asia. It's long, wide and slow. Right now is just after the rainy season so it's fairly high but I have heard that this boat has run aground at least a few times. Hopefully not today. 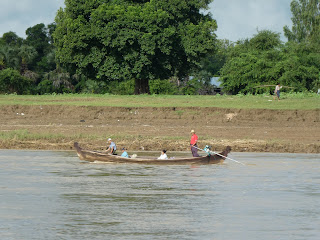