Just a quick one now as we will soon be leaving from Chiang Kong in Thailand. We cross into Laos at Huay Xi and then board a boat for a 2 day trip to Luang Prabang.

The Blogaway mobile app has been giving me trouble so I haven't been able to upload a post from Mandalay. I'll fill in blanks later... 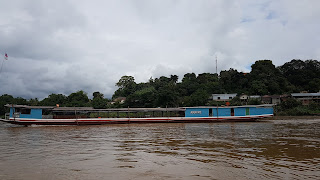 Well, here I am filling in blanks several days later. Our wifi connections for the last few days were very poor to nonexistent and the 30 day 5gig SIM card I bought in Laos worked for only 1 day.

Anyway, the slow boat to Luang Prabang turned out to be pretty good. We bought a "package" at the guesthouse. It included a shuttle from the hotel to the border, a bit of direction to the right immigration windows, and another shuttle on the Laos side. You walk across the bridge from Thailand to Laos, switching from one side to the other as you go. Thailand drives on the left; Laos is back on the right. 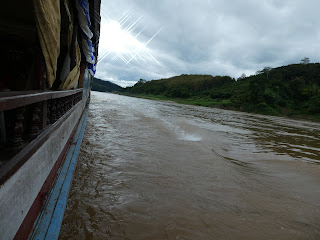 We were though immigration pretty quickly but with a $42 USD fee (higher for Canadians; ouch!). Another bus picked us up on the other side and after an orientation from a guide we switched to tuk-tuks to the boats.

About 90 seats I think on the boats with reasonably comfortable bus type seats. Basic toilet facility (that I never used), a few snacks beer and water for sale on board, and a smoking section at the stern behind the motor. 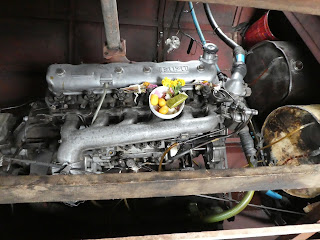 The group of people on board was pretty congenial. Most 20-somethings, many from Europe. A few are older, some older than us. Many of them we ended up running into again and again at Luang Prabang and Vang Vieng.

While it is a direct route, we did make a few stops to pick up or drop off the odd sack of rice or monk. Sometimes both. 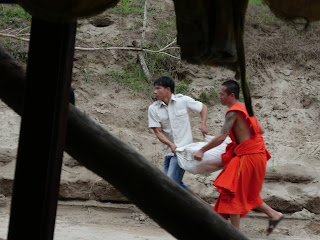 The first day on the boat was from about 11 AM or so to about 6 PM. We had arranged a hotel through the guide but I wouldn't recommend doing that. We paid twice what others paid on arrival at the same place and it was definitely nothing special. In fact it was the worst place we have stayed at yet.

Dinner wasn't bad though, at an Indian-Lao place. It came complete with escargot on the hoof. 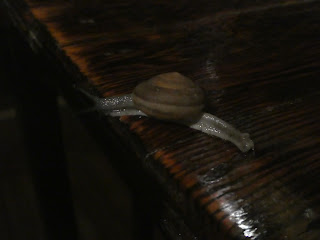 Next morning I was awoken by a rooster but coaxed out of bed by an elephant. These 2  guys were immediately across the river. 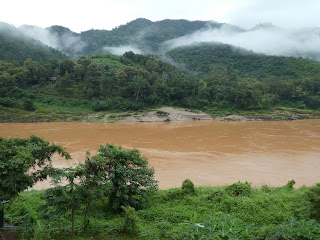 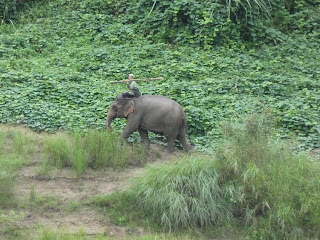 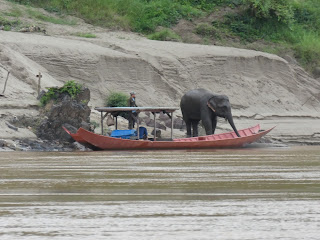 That was a nice start to the day as we had breakfast while watching them. But soon we grabbed sandwiches and trudged down the muddy road to the boat, a different one today. Same-same, but different.

A young woman from Halifax and I carried our packs plus each handle of an awkward rolling duffel that this older French woman was travelling with. It is pretty remarkable how many people have rather difficult to handle bags or suitcases.

We are self sufficient in the bag department. Frequently the drill is Linda grabbing the 2 day bags and me throwing my larger pack on my back and grabbing hers. Bags are often being tossed out of or down from racks and I can handle slinging them around better.

The second day on the boat was an earlier start and less scenic, but that was largely because it rained much of the day and we rolled down the plastic tarps. Arrival at Luang Prabang was around 2 or so PM. This was where we met Felix.

Felix is German/Vietnamese and was helping out at the Sokdee Guesthouse in exchange for a free room. He had come to the riverbank with a van to grab guests for the night. In the rain a van sounded better than a tuktuk so we hopped in.