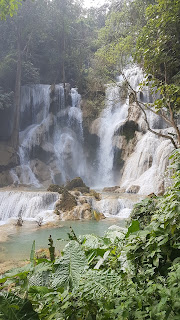 While at the Sokdee Guesthouse we arranged a tour by tuk-tuk out to Kuang Si falls. We set out with about 18 people total in 2 little vehicles on a trip to the falls about an hour away. We went early in the morning which was a good choice as it gets busy later.

It gets busy with good reason. It's pretty spectacular. Highly recommended if you get to the area. 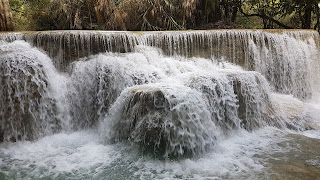 Water levels were high as the rainy seaon is just recently passed. Absolute torrents are coming down. There are multiple levels and numerous pools where you can wade or swim.

Access to the top is possible by trails on either side. They are steep and a bit tricky in spots so are not for everyone. It takes about 20 minutes to the top where there are more pools. 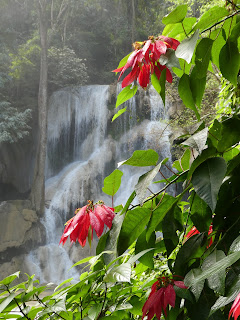 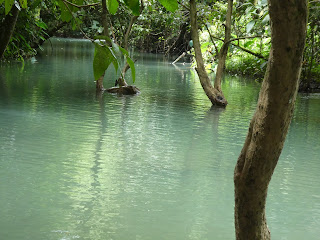 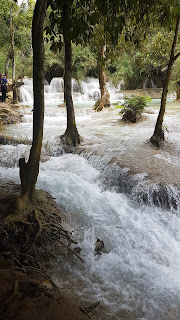 The falls are in a park like setting which also features a refuge and rehabilitation site for Asiatic bears. Bears are often snared and kept alive (barely) in cramped cages in order to harvest their bile, in another one of those vile habits the Chinese have to maintain health or virility or something.

These bears, about 6 of them, have been brought here to be brought back to health. I don't know if they will ever be released into the wild (I think not) but it has to better than refrigerator sized cages. 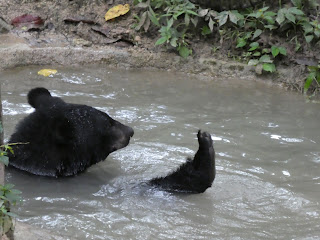 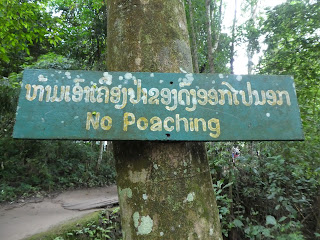 Eventually we had to come back down to the tuk-tuks and ended up waiting for our fearless leader Felix. However he turned up somewhat embarrassed eventually as one of our group had stolen his clothes and pack when he went in swimming. Running around with his dark skin and long hair, wearing a black speedo, we thought he looked like Tarzan or Mowgli from The Jungle Book. :)