We decided to leave Yagon a day early, or rather a half day. We had planned to stay 3 nights but the bustle of city was wearing on us pretty fast. Plus we decided to save some money and take an overnight bus rather than fly to Bagan. Bus would be about 10 hours or so, leaving at 9pm, and was about 37,000 kyat or about $40.

However the bus station was a 2 hour taxi ride away. It should have taken less but traffic was insane.

The reclining seats were nice enough, blankets pillows and snacks were provided. We got a bit of sleep and arrived at the bus station outside Nyaung U about 7am. Pushy taxi drivers abounded but we took a horse. 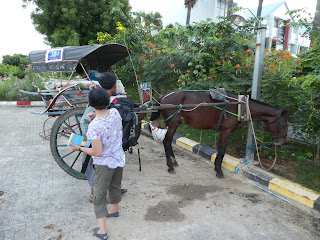 Our driver had his young son with who he was teaching how to handle the buggy. They had to get up at 2am and after working for several hours the kid had to go to school.

We checked out a couple of places and went back to the first, the $22 Eden Motel. The girl running it is lovely and very helpful. I say "girl" but that's not fair. She has 2 cute kids of 3 and 5 years old, but she looks very young.

Nyaung U is just a short distance from the main sites of Bagan. However, that's underestimating the scope of what this area is. There are literally thousands of temples and related structures scattered for miles across the countryside. You could spend weeks here and still miss some. We will be templed out in 2 days I'm sure. 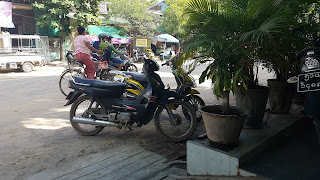 We opted for an E-bike, the yellow one in the background. It's hot and I don't want to bother getting up from my chair to get a better pic. For $5 a day it's a good bargain. We covered a lot of ground, maybe 30km on it. Seeing stuff such as below: 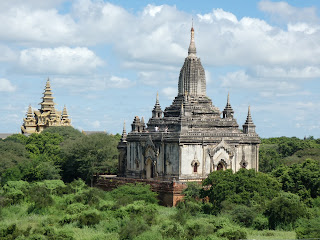 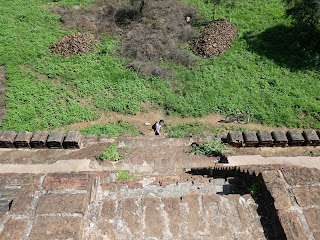 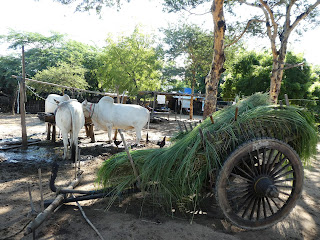 I'd upload more pictures but the battery on my phone is low, and the power is out on our street (it went out in Yangon at our hotel too). Later..