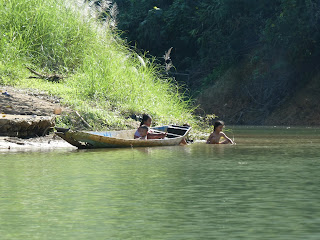 Vang Vieng has a history of being a party town. We had heard of this reputation and it kind of turned me off on the idea. Drunken and stoned Aussies doing stupid human tricks and sometimes dying because of it was not applealing. However in recent years the Laos authorities have tried to clean the act up a bit and it seems to be working.

We took a mini bus there from Luang Prabang. Travel time was about 6 hours with several others from our guesthouse and others we picked up in town at other rooming places. The mini-buses are one of the more deluxe ways to go. They are generally newer Toyota or similar 15 seat passenger vans. Seats are reasonable and air con usually works. They also don't pick up random chickens.

The route takes you over a pretty high pass at around 1500 meters. The view was quite remarkable in places on the way up though there was also significant deforestation of the hillsides. It probably wasn't apparent to many people as it had greened over with brush but the real trees were gone. The view from the top was nothing but clouds and a muddy rough road down. 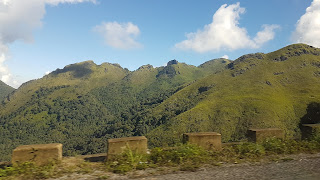 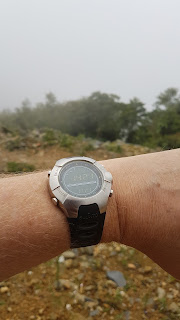 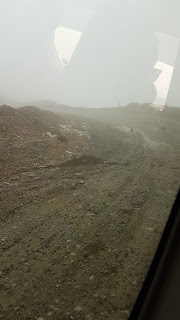 The town of Vang Vieng isn't the draw. It's just a dusty little town without much to say for it's own sake. The town is at least half guesthouses and hostels and some nicer hotels. Shops sell a few crafts but most have sunglasses, sandals, shorts and dry bags. Yup, dry bags. 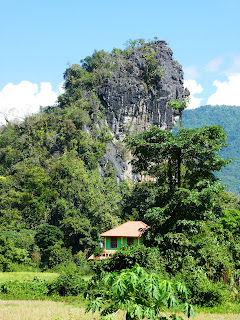 The draw here is the terrain and the river. The rock climbing is good, there are caves to explore, there is tubing kayaking and swimming in the river, Waterfalls and ziplines, balloons and parasailing lawnmowers. And lots of cheap food and drinks in the bars. Sometimes these things don't mix of course and that is why some overzealous thrill seekers have drowned or otherwise bit it. 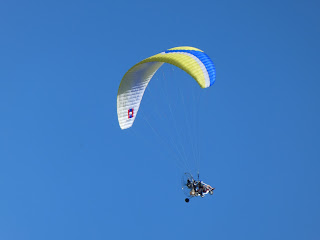 We stayed at a nice little guesthouse on the edge of town called Laos Haven. It was away from the dorm style hostels and cost us about double probably their rates but was still pretty cheap for us at around $23 per night. Still only 10 minutes walk from ''downtown'' and actually closer to a lot of the restaurants too.

We opted to take one of the tours that included tubing in a cave and kayaking down the river. They picked us up at the guesthouse, provided lunch and the gear to help survive the trip. Other options included visits to pools and falls, etc, but you can only do so much. Our package was a pretty good one.

The cave tubing involved pulling ourselves along by a rope attached at various points a long the cave walls. We were in the cave for perhaps 45 minutes but I lost track. Everyone was given a headlamp though we had our own, and a lifejacket just in case. The water was generally very shallow though and the cave low enough in spots you could (and I did) use the roof and your fingertips to pull yourself along. This was helpful at times as we had to pass other groups coming back. Linda got out of her tube to wade at one point because she couldn't reach the roof or over the tube well enough to paddle with her hands. Getting her back on was kind of fun as she was in water too deep to all back into the tube too but with my help and that of a young Korean we got her back on her way 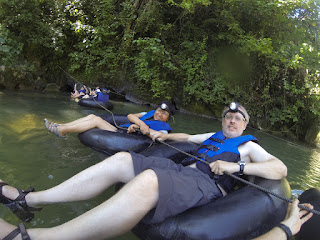 Obviously this wasn't a great place to take pictures though I had bought a small dry bag. The one of us on the way in is courtesy of a Californian with a GoPro.

After lunch we had a brief stop at the Elephant Cave and then were off to our river kayaking. 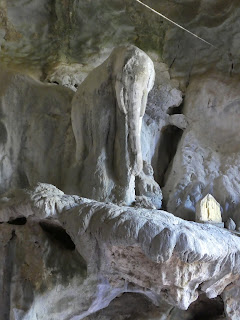 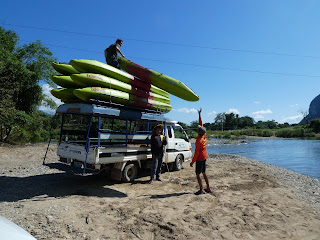 The kayaks were all double or triple sit-on-tops. Our group included California guy (a good one to keep near if you dumped as he was good at this stuff), several young Korean men, several twittery young Thai gals and a Chinese guy. We were the second most capable with the kayak, though I can't swim, the Thai girls and a couple of the Koreans were ok. Chinese guy  was pretty useless so was doubled up with California who did most of the work.

The trip downstream was about 2 hours and about 8km. We had to watch for the shallow bits but the guides were good and kept us out of too much trouble, and found the best routes through the best short sections of rapids and a couple of drops. Nobody dumped in our group though eventually we caught up with a large Korean group that pretty much flailed away and fell in.

We had a lot of fun. I could take the camera out of the bag once in a while at least too 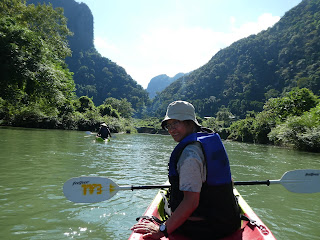 Beautiful scenery but Linda, you are blocking the view! 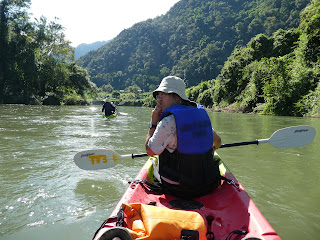