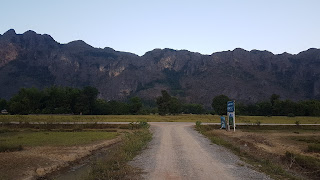 We emailed ahead to Salalao or Spring River Resort at Ban Kong Lor as it appeared to be the nicest option in a village without many. It proved to be a great choice, though expensive as this trip goes. It was a kilometer off the main road to town where the bus stops and about 3km from the cave. However it was very peaceful and quiet. 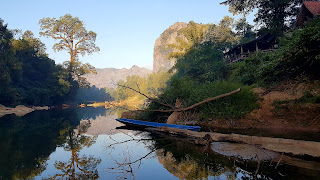 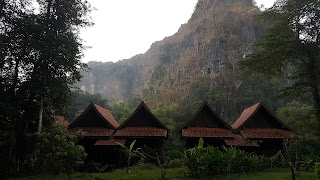 We got there by local bus. It was a large bus and in relatively good condition compared to some we have seen. Plus the air-con worked reasonably well. Roads were ok at first being on the main highway #13, but got progressively worse as we went along route 8 and wound through the karst mountains. The last section was flat but very chopped up with potholes. We got off in the middle of nowhere and walked the last bit. 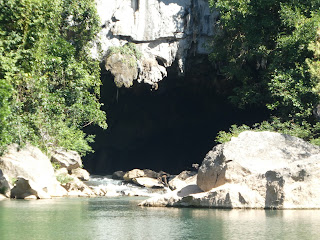 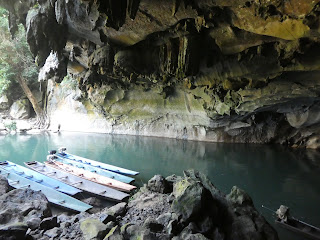 Kong Lor itself is an amazing attraction. It is a large cave with a river running for 8km though it, essentially passing under a mountain. You can take river boats through it, maximum 3 per boat, and stop at the other side then return in the opposite direction. You can't see much of course once inside though they do provide headlamps and we had our own. The boats are operated by locals who obviously know the cave well. Several times on the way through we had to get out and walk or wade for short distances to get around super shallow sections and in one place to see limestone formations that were somewhat lit to help the viewing. 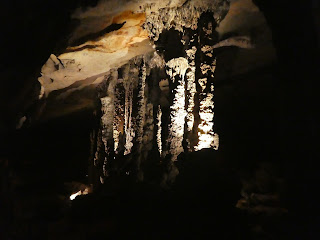 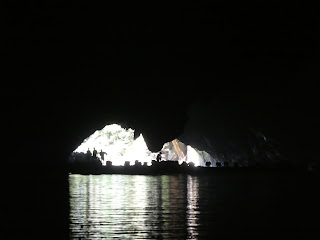 We walked the roughly 3km to and back from the cave, stopping for lunch and thread shopping on the way back. We shared our boat with woman from Macau who was travelling alone. Linda could chat with her in Cantonese.

The resort had great food and service from a manager and staff who seemed to genuinely happy in their jobs. I don't think I've heard "cop chai" (thank you) said more often anywhere. 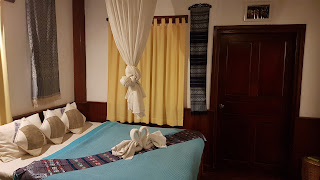 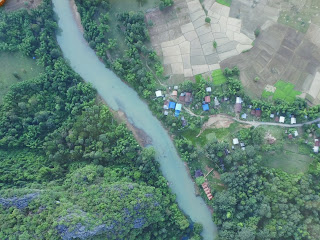 The room and setting couldn't have been much more idyllic, but alas; we had to move on.

Next stop would be Dave's place in Savannakhet. Leaving early in a truck that our guesthouse manager arranged to have pick us, transferring to a tuk-tuk at the next village and intersection, and another big bus (much crappier) from Thaket. In all about 180km. 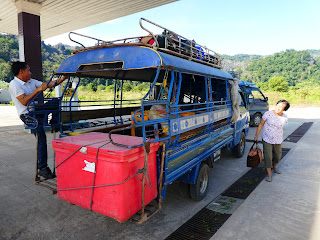 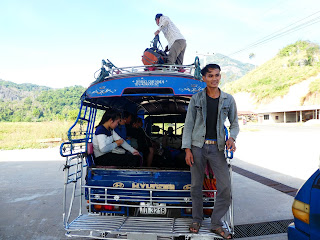