Filling in Blanks re Portugal We are in Paris now after arriving yesterday on Spanish airline Vueling from Lisbon. It was an easy 3 hour flight and brought us into Orly where we got an RER (suburban) train to the Metro and soon found ourselves at the apartment near the Jourdain station in Belleville. We have been here before so it feels comfortable and it has consistent WIFI, unlike the last 5 days in Portugal. 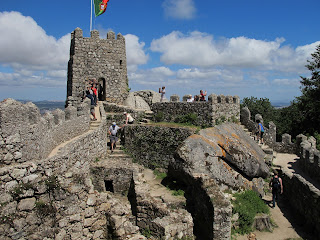 Sintra was our home for 2 days where we had one of the few private rooms at the hostel. It was a nice place with very friendly staff and other guests. The TV set became a focal point for a while as we watched more of the Euro Cup soccer matches and were happy to see the Portugeuse team defeat Denmark, though not as much so as Miquel, the hostel manager. 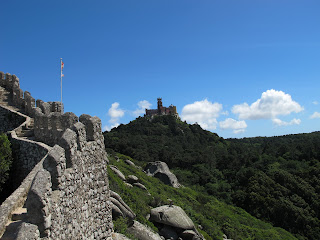 Sintra is a beautiful city, located a short train ride west of Lisbon. It is a very popular destination for both locals and tourists and deservedly so. The topography is hilly, and it is covered in large parks for gardens and multiple varieties of trees both softwood and hardwoods. The amount of forestation and the locale make for a cooler more comfortable micro-climate that is quite pleasant compared to Lisbon. The royalty of Portugal have used the area as a summer home and even moved here more permanently after the huge earthquake of 1755 leveled much of Lisbon. 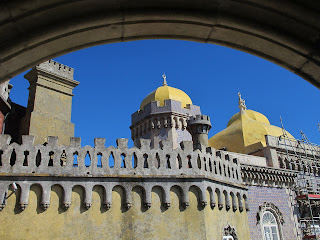 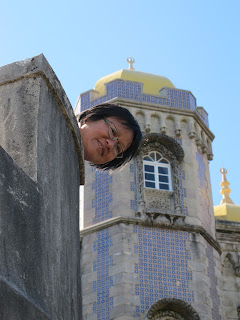 The area has had permanent settlement since before the Moorish castle was constructed in the 8th or 9th century and it has had other impressive castles and stately homes built since such as the Palace of Pena which you see at the top of this post. It's almost a fairytale design in bright colours with towers and domes perched high over the town, on the next peak over from the Moorish castle. 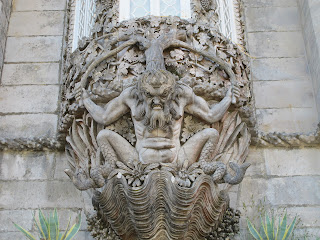 We walked up through the forest trails to get here, and at times appreciated the wind that kept things cool but other times it threatened to blow us off the ramparts it was so strong. There are multiple other ways to get up to these hills, including tour buses, regular city buses, electric cars, horse drawn carts or you can ride a bike or drive up, but we took the cheap route.

Our second day here we visited some of the newer parts of the city including a set meal at a vegetarian restaurant where among other things I had a large glass of Avocado-Lemon juice. Unusual but yummy. 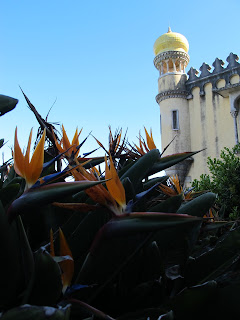 The main site-seeing for day 2 was the Quinta da Regaleira, a large estate with incredibly fancy home, it's own chapel and extensive symbolic gardens with man made caves and lakes, spiral stairs down deep into the earth, statues and benches and much of it symbolic of ancient mythologies and religion. We spent a good 3 hours here wandering the buildings and grounds while deliberately getting ourselves lost in the caves. We were told that since they were man-made tunnels (though they looked fairly natural) that I would not hit my head. Not so. Apparently 19th century Portugeuse were not that tall (21st century ones are not either).

I'll fill in more in a day or 2. I can't seem to get this Linux equipped netbook to read the camera memory card right now, so pics will have to come later.
Posted by Unknown at 1:06 pm