South to Coimbra, East to Sabugal 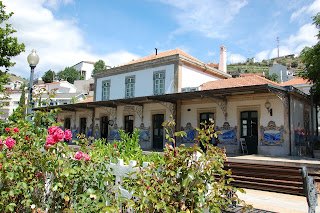 We took a taxi from Quinta Do Passadouro back to the train station, only 10E for the trip the driver traveled at least 20km do (out and back). The winding narrow road and his familiarity with it almost had Linda getting nauseous.

Trains being on time as they are here we easily got back to Porto and then quickly onto a faster train to Coimbra on the same line that goes to Lisbon. We met 2 women from Saltspring Island who were on both trains with us.

We left the vineyard covered valleys behind and passed through more mixed agriculture as we headed south for the city of Coimbra, famous for its university founded in 1290 and at one time the capitol of Portugal. The university is still one of its major sites here and still in the same buildings it has used since the 16th century. It's all on the hill above the town and as usual reached by narrow cobbled streets and stairs. You get a commanding view of the city and river below. We stayed at a stately old residence, the Avenida, just a few blocks from the train station and steps away from the old city. 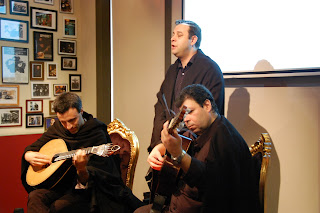 After bright and sunny for one day, it turned to clouds and occasional rain again. Just enough to make it less desirable to stay out and wander but not so much to make you run for home. Still it ended up being an early night, but not before attending a Fado concert with Port thrown in for good measure.

Fado music is particularly known as being a Coimbra thing though popular elsewhere in Portugal as well. It is a music for serenading ones girlfriend so rarely sung by women (except maybe on Commercial Drive?), though has also been used as a form of political expression. The musicians are a singer, a classical guitarist and a player of a specific type of 12 string guitar the Guitarra de Coimbra. 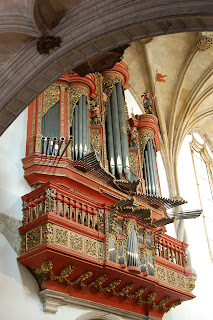 We also stepped inside a local church with an impressive pipe organ though not to hear it unfortunately.We ate in what was an impressive dining room at an upstairs restaurant with a jazz theme and we were the only diners until we were about to leave. The food was great though. 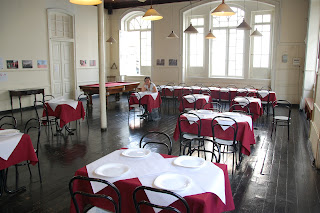 After a tough night sleeping due to traffic noise outside our window we walked a mile or so to get our rental car from the Hertz depot. Our little Peugeot is a nice car and only a few months old. With a bit of instruction from Hertz guy we were soon on a major highway heading north, and turned off to more minor but still good highways in a more easterly direction toward Guarda. We passed a large park and eventually turned into the park to cut off the top corner of and drove through some of the smallest towns yet. Our tiny car just fit through some of the streets. After a wrong turn or 2 we ended up soon approaching Guarda, which was not our destination but a lunch and sightseeing stop. 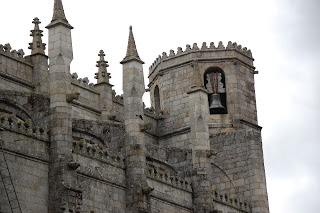 Contrasting the castle at the top of the hill was a more modern citadel, a mall looking every bit as impressive in the way it clung to the steep hillside. We picked up a few snacks for the road and soon got lost on the way out of town.

However, this where picking up a SIM card for my phone came in handy. The Vodafone card I deliberately bought with a fairly good data plan. It's only good for a month, but I included 500 megs of data for an additional 5 Euros primarily for navigation purposes. The GPS voice guided turn by turn direction soon had us back on the right path, even though I ignored a couple of the U-Turn requests when it meant going the wrong way on a one way street. The data also comes in handy when I want to look up words on a menu or something similar. 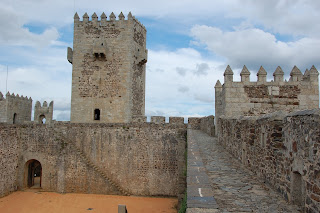 Anyway, we did not take any more wrong turns and ended up in Sabugal where we are now. Another impressive castle and museum are the focal points here, and we are in a hotel suggested by the museum guy who also does the tourist info duties. This is very much a one horse town and we wandered the streets for a long time looking for a restaurant before settling on the only place that appeared to be open, a pizzeria. It looks like an early night in this sleepy high country town; we could even find a bottle of wine to bring back to our room.

This area was a bit of a random choice. Our itinerary had some open time in it, tonight being the first unscheduled one. It was different from other areas we had been staying at, off the beaten track and away from the water side of Portugal. In fact we are with perhaps 30km of Spain. I'm tempted to just drive across the border for the heck of it, but the Euro zone being what it is I don't think I could even get a passport stamp for it.

So tomorrow we head south and will pass through the even smaller ancient town of Sortelha. This town has an impressive castle too and apparently weird terrain in the area, a similar bit of which we saw today as in glacier till debris of large boulders dotting the landscape. And then on to Tomar where we have 2 nights booked.