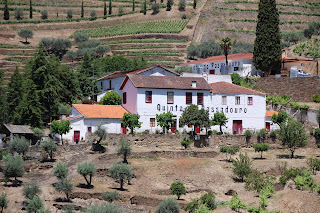 Probably what may be our most expensive day of accommodation and food in Portugal has been today, or at least we hope so, as we are not high rollers though nor are we absolute low-ballers.

Many people come to Portugal (or Spain, Italy or France) on wine exploration tours. Nowhere would this be more evident in Portugal than in the Douro Valley, the home of much of the Port industry as well as significant for other wines.

Somewhere in my web searching I came across Quinta Do Passadouro and booked a night at the inn or B&B. They are an active winery (portery?) up the Vale (valley) Du Mendiz from Pinhao which is about 2 hours by train inland from Porto. We had hoped to travel here by boat and back by train or perhaps the reverse but the logistics of that were a bit tricky so train in both ways it will be. I don't know how the long the boat takes but I am sure it would be twice as long and we have to go back to Porto to get another train south to Coimbra and can't leave that too late.

Our train too us to Pinhao where we were picked up and taken 10 km up to the Quinta on the Mendiz river. Jet and Ronald, a Dutch couple, run the operation for the Belgian owners. Maybe it's their connections there but they seem to get a lot of visitors from the Netherlands as of the 4 couples here this evening 3 are Dutch (correction: a late arrival of yet another Dutch couple brought the inn up to almost full as it has only 6 rooms). Fortunately everyone speaks English as our knowledge of Dutch is about the same as our Portugeuse.

The winery produces estate wines and ports from the 30 acre vineyard and sells them on site and for export. Ronald gave us a tour of the operation as the wine part of the business is his and the B&B part is run by Jet. Ronald also acted as our host for dinner and served us at least half a dozen types of local wines and at least 2, or was it 3 ports?... we started to lose track after a while. 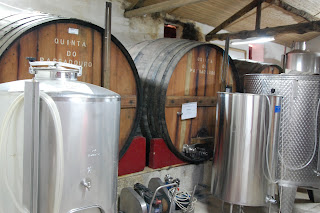 The evening meal served in the yard next to the orange tree and under the still young grapes was simple but delicious. Local veal lightly seared and served with potatoes and spinach, with appetizers and dessert. All of it alternated with wine of different varietals and styles, all of it red or tawny.  Pretty yummy.

Before dinner we had walked the winding road 2 or 3 km back to the closest village and had a bit of a picnic under the cork trees. Unfortunately we arrived at the local cafe just as it closed for a siesta at 2pm, so it was a very hot and dry walk back. We tried to get down to the small river for a dip but took the wrong path and ended up stuck in the overgrown riverbank and ended up coming back up just as sweaty as when we went down. However the cool shower soon helped and we relaxed in the yard the rest of the afternoon. 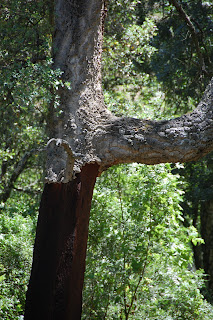 Some of the other guests are staying here as long as a week, and none less than 2 days. If we had a car as they all do we could consider doing something similar as they are using it as a base for exploring the region both for hiking and wine exploration. We don't get our rental car until tomorrow in Coimbra. We now have some suggestions for after tomorrow for the few days we have nothing booked and we are just waiting for the taxi to take us back to the train station in Pinhao, a bottle of port for the road in the pack. 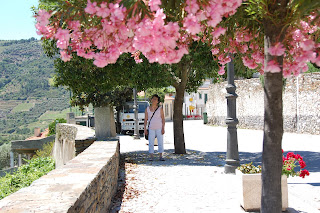