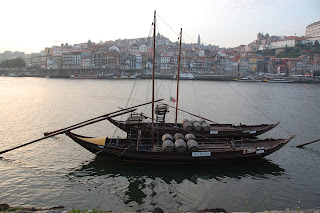 We were on the ground in Porto by mid afternoon, though getting out of the airport took a little while, mostly trying to figure out the ticket machine for the trains. At least we didn't try to feed it Guatemalan currency as we tried to do in Frankfurt (the 10 Quetzal coin looks a lot like 2 Euros). Nice modern trains travel around the city on 4 Metro lines.

Out of the train at Sao Bento station the first person to speak to us wanted money for showing us the tourist info booth. Nope, we could see it a block away.


Our little studio apartment on Mercadero was not even 10 minutes walk and on a narrow alley width street that reminded us of the Medina in Fez. Tall and narrow buildings of stone and dark wood, often with painted iron grills and panels of ceramic tiles, mostly roofed in red terracotta. Ours is about 4 floors and we wind our way up to the 3rd. It's largely decorated with vintage Ikea but overall comfortable with some eclectic thrown in with the common sense. Mini fridge, built in washer/dryer and pretty well equipped as long as you can figure out the stove with Portuguese instructions.

Dead tired after about 24 hours travel time from Vancouver, we didn't dare lay our heads down for fear of waking up at midnight with nothing to do, we strolled around the water front literally a block away & the epicenter of the tourist district. Miquel, our contact at the apartment said we should try the local dish, Francesinha, at a spot across the river called Ar Del Rio as they made it better than anyone and had one of the nicest spots to eat it. He was right about the locale for sure. We were not so sure about the dish.


The food was good, in an obesity causing, artery clogging, OMyGod kind of way. I kind of think of the dish as a cross between Poutine and Philly cheese steak. It was layers of 3 kinds of meat (sausage, steak and ham) alternated with cheese and I think there was some bread in there somewhere. This was drenched with gravy, mine came with an egg on top, and it was served with a huge order of fries. It was really good...and  kind of gross. However along with wine in the deck chairs overlooking the river and the old side of town before dinner, and beer during (Francesinha is not a wine kind of meal), it was still a nice experience.


We walked it off somewhat and did much more of the same the next day, now Saturday. First night sleeping was barely ok, as we kept the windows wide open as it was comfortably warm (low 20s and a bit humid), but the time zone change and the bar down the alley, plus traffic on the fairly busy street a block away did not really help. We got enough though and eventually found our way out and around much of the old city Ribeira district that we are staying in. 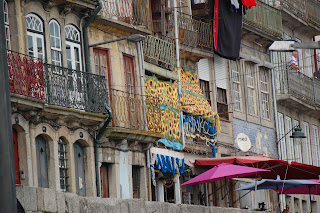 Porto lies along the steep banks of the Douro River and eventually you have to go up and down. We did  lot of that, the first time by a funicular. It also has as many European cities do, many churches. But as Linda says, 'a church is a church, how many do you need to look at'. There is lots of impressive architecture but we found ourselves mostly looking at it from the outside with a few exceptions.

After coffee and biscuits at the aptly named Majestic Cafe we checked out a local food market where we picked up lunch and supper food. The point of staying in apartments for us is partly to do like the locals and partly to help keep costs down. Eating simply & preparing some of our food helps a lot. We brought home onion & garlic, cheese and sausage, bread, fish, squid, lemon, zucchini, olives, ground cherries, figs, and some kind of fruit that is like a peach/apricot cross. All of it is delicious and cheap. As is of course the wine!

A 1 litre bottle of very nice red was 1.6 Euro or roughly 2 dollars! Why drink water? Actually water was cheap too at .6E for a a large bottle for our fridge and milk in a tetra pack is .8E (about a dollar) for a litre.


It was still warm today, around 20 degrees, but it rained off and on, so we found it a good day to take the old electric tram out along the river. It travels ricketily along the water, sometimes having to wait for cars or trucks to clear the narrow track allocated for it. It is all wood and leather and brass. It does not get a lot of respect, even from pedestrians, as it moves so slowly along the narrow winding streets. The end of the line is near where the river reaches the Atlantic ocean and this is where the fishing begins as well as the beaches. 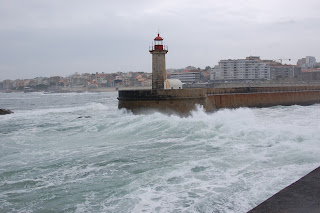 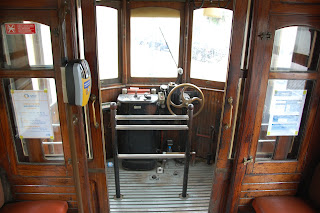 Dinner at home tonight, with pasta and fish, as it is raining out again, but we hope it it will also keep the bar regulars inside. Tomorrow we plan to travel a bit further away from our neighbourhood and check out the weekend cultural events at a local park and the artisans at a district near there. 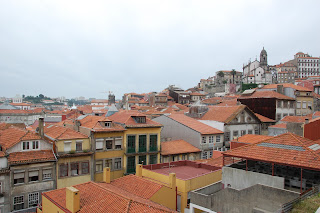 We are finding people friendly and willing to communicate in as much as we and they can. My Portuguese vocabulary will certainly increase but so far it is pretty limited, and English is spoken by many people here quite well. In the little shops and market stalls not so much but there is alway paper handy for writing out the price.

The tourist info & train ticket types and the Vodafone folks who sold me my SIM card and helped configure it have been very good. Shopkeepers pretty good too. We bought train tickets to Pinhao already for the day after tomorrow. The day back will be a touch tricky, as have to take 2 trains back to Porto and then another to Coimbra. So far so good though, and general strikes (seriously there are rotating ones going on) and bank machines cooperating, it should all be fine. 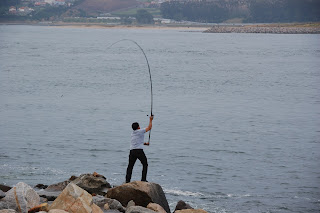