Porto day 2 and a bit 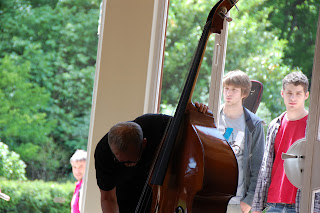 Today we figured out the one day transit pass which is a great deal at about $5 within the central city. We also found out that much of Porto is closed on Sunday, including the farmers market we planned to visit again.

In any case we got our value out of the transit system with 2 train rides, 3 bus rides and 2 fucinular...uhh I mean 2 funicular rides each. Our first trip took us out to a large park where a music and cultural festival was going on all weekend, or at least 40 continuous hours of it.

The festival was somewhat kid oriented at least during the day time when we were there and was crowded with local families. We saw snippets of a young group playing brass, woodwind and steel drums, and later an improvised music ensemble of guitars, trumpet, percussion, double bass, turntables and tape loops. The bass player spent more time beating on his bass with a stick or mallet than bowing it, and the drummer sometimes brushed his drum with a block of styrofoam. It was a good and entertaining, non traditional performance in an intimate environment with everyone sitting on the floor with cushions. 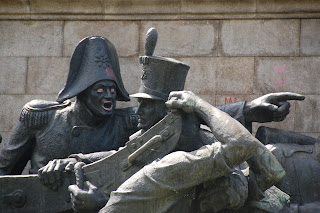 We also visited the modern Casa De Musica and the war memorial near it, and then meandered back along the waterfront and past the tourist mongers. We had our 1.15 Euro table wine for dinner and other fresh food to prepare at home.

Before doing that we acted like tourists again and hung out on the river with beer and lupini beans. They are like fava beans but yellow and lightly salted, and you pop them out of the slightly tough (but not indigestible if you swallow it) husk and munch them like peanuts. 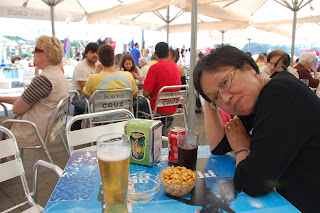 If I were a food blogger, which I kind of feel like I am sometimes, I would someday do a feature on 'snacks to drink beer with around the world'. Here so far it seems to be the beans above. In Vietnam it was garlic and peanuts fried together, or fried banana chips, and in Cambodia deep fried tarantula. In China pretty much any critter you could fit on a stick would suffice. All of it makes pretzl sticks seem a bit mundane and todays snack was probably the healthiest yet.

On the waterfront here we had to put up with saxophone guy who has a beat box and knows only one riff, but in general there is little obnoxious commercialism. There are a lot of street vendors and restaurateurs who invite you in but it is never in your face pushy. It may be an indication of tough economics but nothing seems over priced. We have seen a few enticing crafts, especially in cork or tile work, but the only souvenir purchase so far has been a rooster fridge magnet. 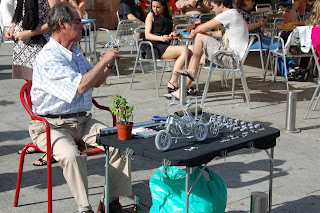 Life also goes on in Porto and death too I think. As we walked along the river before our supper this evening the maritime police and ambulance service interjected with what might have been the end result of too much much port wine and sausage. It was a body bag being transported from one of the tourist boats up to a waiting ambulance.

Tonight we hope the guys upstairs from us don't come in and practice their flamenco at 3 AM as they have the last couple of nights, as we have to get up early for our train. I also hope that Linda does not try to figure out the Euro
laundry machine again, washing our clothes for 3 hours or more and still not getting it rinsed properly.